The health benefits of shrimp include improved bone and brain health, weight management, and a lowered risk of cardiovascular disease. Shrimp has anti-inflammatory, and anti-aging properties that help to reduce the risk of various health ailments. It helps in treating age-related macular degeneration and relieving eye fatigue. It also provides relief from menstrual pain. Shrimp is a high-benefit option for increasing your overall health in a truly delicious way.

The term “shrimp” is a broad classification of any one of hundreds of small crustacean species that can be found throughout the world in marine habitats and are eaten by cultures across the globe.

Shrimp are decapod crustaceans from one of two groups, Caridea and Dendrobranchiata, although some academic scholars disagree about the placement of certain types of shrimp within those classifications. The majority of shrimp, also commonly called prawns, have stalk eyes, strong tails, small, spindly legs, and long whiskers. The tails of shrimp are the primary food source for consumption, and there are thousands of shrimp farms throughout the world, as well as those that are caught in the wild.

As the name implies, most shrimp species are quite small, approximately 1-3 cm long, but the most sought after and commercially viable species are much larger, sometimes growing up to 25 cm long. Although there is a large variety of shrimp, most species maintain a similar organic makeup and therefore provide very similar health benefits for those who add shrimp to their diet. 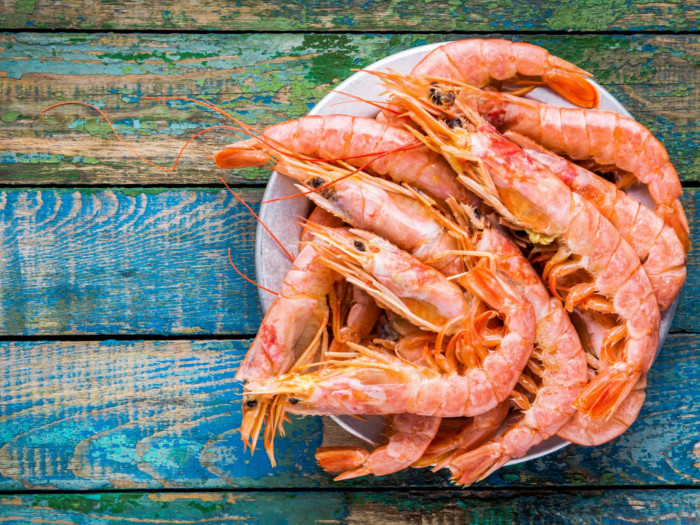 Pink shrimp are caught year-round but they tend to be most abundant during the winter and spring. Photo Credit: Shutterstock

As mentioned above, the main source of food in shrimp is the meaty tail, but some cultures and various cuisines choose to eat other parts of the shrimp as well. These small, funny-looking crustaceans provide a wealth of nutrition when added to your diet.

For people who are looking to eliminate excess carbohydrates from their diet, shrimp is a popular option because it contains zero carbs, and is also very low in calories (approximately 1 calorie/1 gram of shrimp).  As an organic life form, shrimp is packed with protein and is composed primarily of water, but there is also a small amount of fat as well. However, the most beneficial aspect of shrimp is the treasure trove of vitamins and nutrients that it contains.

You can fill out your daily mineral intake of iron, calcium, sodium, phosphorus, zinc, magnesium, and potassium, along with vitamin A, vitamin E, and B6, and even vitamin B12! It also contains iodine, thiamin, riboflavin, and niacin.

It can be a delectable and efficient way to balance your nutrition and promote a healthy body.

The amazing health benefits of shrimp include the following:

Shrimp is a great source of protein and vitamin D, without adding carbohydrates to your daily intake, so for people determined to lose weight, this simple form of seafood is a popular option. The high levels of zinc are also beneficial since zinc is one way to increase leptin levels in the body. Leptin is a hormone and is an integral part of the body’s regulation of fat storage, appetite, and overall energy use in the body. By increasing the levels of leptin in the body, people can avoid common issues like overeating, inexplicable cravings for food after being “full”, and a similar problem for weight-conscious individuals.

It also has high levels of iodine, which help to control how much energy is expended when your body is at rest. It interacts with the thyroid gland to speed up thyroid activity, helping in people’s efforts to lose weight, or at least to prevent additional weight gain.

Sunlight is one of the major causes that promote skin aging. Without protection, even a few minutes of exposure to sunlight and UVA may lead to wrinkles, spots, or sunburn. By adding shrimp to your daily or weekly diet, people can greatly improve their chances of beautifying their skin and shedding years from time-worn faces.

It contains high levels of a certain carotenoid called astaxanthin, which is a powerful antioxidant that can greatly reduce the signs of aging in the skin related to UVA and sunlight. Therefore, for individuals obsessed with spots and wrinkling skin, add a shrimp cocktail to your diet a few times a week to slow those inevitable effects.

Studies suggest that shrimp contain a heparin-like compound that may help in treating neovascular AMD. The astaxanthin found in shrimp also relieves eye fatigue, especially for those who use computers for long durations in their personal or professional lives.

The minerals found in shrimp also contribute to the health of our hair! A deficiency of zinc may cause hair loss. Zinc plays a key role in maintaining and creating new cells, including hair and skin cells, so for those who are beginning to lose their hair, or at least are seeing a decrease in hair growth, it can work against that embarrassing reality, keeping you looking younger for longer!

Fermented shrimp paste, which is a popular manipulation of the food, contains a fibrinolytic enzyme that can be used for thrombolytic therapy. Thrombolytic therapy is a way of breaking up dangerous blood clots within a person’s blood vessels. This enzyme found in shrimp paste can be a powerful tool against the dangers of cardiovascular disease, which afflicts so many people throughout the world. Also, the high levels of omega-3 fatty acid found in it eliminate damaging cholesterol in the bloodstream, which further reduces the chance of heart attacks and strokes.

Protein and various vitamins, such as calcium, phosphorus, and magnesium, found in shrimp can effectively aid in the fight against bone degeneration. A deficiency in dietary proteins and vitamins can cause the deterioration of bone quality, bone mass, strength, and overall mass, which are the main symptoms of osteoporosis. Adding it to your daily or weekly regimen of food can slow the effects of aging bones to keep you stronger for longer.

Shrimp have high levels of iron, which is a key mineral component in the bonding process with oxygen in hemoglobin. With additional iron in the system, increased oxygen flow can occur to the muscles, providing strength and endurance, while also increasing the oxygen flow to the brain, which is shown to improve comprehension, memory, and concentration. Studies suggest that astaxanthin found in shrimp may help in improving memory performance, survival of brain cells, and reducing the risk of brain inflammatory diseases.

Also, it is a good source of iodine, which helps the human body make thyroid hormones. The thyroid hormones, in turn, are needed for the development of the brain during infancy and pregnancy.

Basically, you can raise your test scores and improve your workout regimen at the same time by including shrimp in your diet!

Not all cholesterol is created equally, and shrimp is a source of the beneficial type of cholesterol, omega-3 fatty acids. These will balance out the well-studied negative effects of omega-6 fatty acids, and aid in the alleviation of menstrual cramps for women, as well as promote healthier blood flow to the reproductive organs by reducing other damaging forms of cholesterol in the bloodstream.

Side Effects of Shrimp

Mercury: Like many forms of seafood, shrimp do contain trace amounts of mercury, which is hazardous to human health and can lead to mercury poisoning, vision problems, and reduced fetal health. However, these health concerns stem from an abundance of mercury in your diet, so as long as you balance your diet with controlled amounts of shrimp, you can avoid the dangers of mercury poisoning.

Purines: Although purines are a naturally occurring and necessary element of our body chemistry, excessive levels can be dangerous, particularly in people who already have conditions like gout. Purines break down into uric acid when cells die and the kidney then manages and directs the flow of uric acid around or out of the body. Shrimps have moderately high levels of purines, which is fine for most people, but if you already suffer from gout, a condition caused by high levels of uric acid, too much shrimp may exacerbate that issue.

Just be smart and always aware of your body’s natural responses!

Shrimp and Pasta: Instead of spaghetti and meatballs in a red sauce, try shrimp and penne pasta with a white wine or Alfredo sauce. Lightly fry the shrimp in a pan until tender, and then lay it over your pasta for a healthy alternative to a classic Italian dish!

Shrimp Kebabs: Spear 3-4 shrimp on a kebab and grill them over the coals during your next barbecue. The natural juices of shrimp flavor quite nicely on a barbecue, or alternate them with peppers and onions on the kebab for a healthy, summer treat.

Note: Cooking it takes very little time, so make sure to not overcook it!