The health benefits of rice include its ability to provide instant energy, regulate and improve bowel movements, and manage blood sugar levels. It also plays a role in providing vitamin B1 to the human body.

Other benefits include its ability to aid in skincare, boost metabolism, regulate digestion, and reduce high blood pressure. It helps in weight loss, boosts the immune system, and provides protection against dysentery and chronic diseases.

Different types of rice include white, brown, rose, noodle, the black pearl, red yeast, wild, jasmine, and sushi rice, among others. They can be long-grain, medium-grain, and short-grain and take a very short preparation time.

It is also well known for the plethora of benefits that it imparts, becoming the reason it is often used in pet food, as an ingredient in cosmetics such as facial cleansers and moisturizers, and in dietary supplements and pills.

Most varieties contain a high amount of carbohydrates and protein. The fiber content varies according to types of rice. For eg., brown rice has more fiber than white rice and therefore, is a healthy option. According to USDA National Nutrient Database, it is also rich in minerals like calcium, iron, sodium, potassium, manganese, selenium, and copper. The vitamins in it include niacin, pantothenic acid, and thiamin. It is a great food for people wanting a gluten-free option and it contains negligible fat.

For most people, rice is synonymous with short-grained white rice. This variety is considered healthy as it contains most of the nutrients and is rich in omega-6 fatty acids, which are known for their pro-inflammatory properties. However, it is generally low in vitamins and minerals.

Since rice is abundant in carbohydrates, it acts as fuel for the body and aids in the normal functioning of the brain. Carbohydrates are metabolized by the body and turned into functional, usable energy. The vitamins, minerals, and organic components found in it increase the functioning and metabolic activity of all the organs, which further increases energy levels.

It forms an integral part of a balanced diet as it can provide nutrients without having any negative impacts on health. Low levels of fat, cholesterol, and sodium also help reduce obesity and associated conditions. While most people have this misconception that white rice consumption causes an increase in blood glucose levels, which is one of the reasons for obesity, a 2013 research paper showed that there was, in fact, no association between the frequency of rice consumption and body weight, BMI or central obesity. Most people prefer brown rice over white rice for it has more fiber content and is, therefore, more nutritious.

Rice naturally does not contain any gluten and hence, causes no inflammation in the gut. This means that people suffering from celiac disease can easily include it in their diet.

A report published in The Lancet states that rice is low in sodium, so it is considered one of the best foods for those suffering from hypertension. Sodium can cause veins and arteries to constrict, increasing stress and strain on the cardiovascular system as the blood pressure increases. This is also associated with heart conditions like atherosclerosis, heart attacks, and strokes, so avoiding an excess of this mineral is always a good idea. 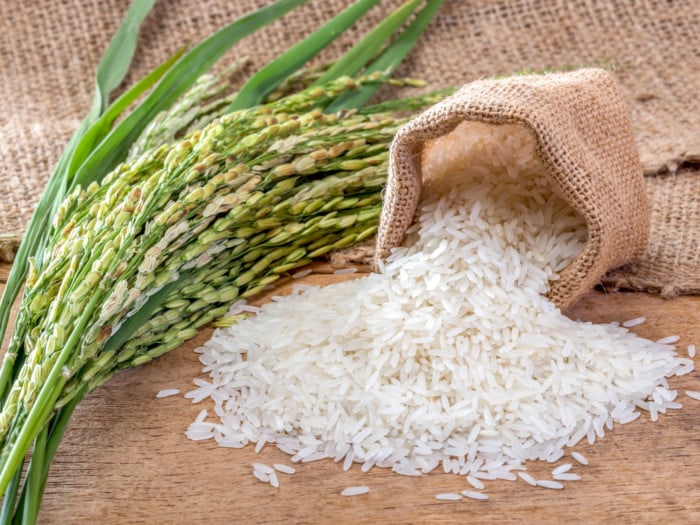 The whole-grain variety of brown rice is rich in insoluble fiber that helps protect against many types of cancer. Scientists and researchers believe that such insoluble fibers are vital for protecting the body against the development and metastasis of cancerous cells. Fiber is beneficial in defending against colorectal and intestinal cancer. However, besides fiber, it also has natural antioxidants like vitamin C, vitamin A, and phenolic and flavonoid compounds, which help scour free radicals from the body.

A 2017 study published in the BioMed Research International, provided substantial evidence that consumption of rice by-products could provide optimal chemoprevention due to antioxidant phytonutrients. However, more scientific evidence is required to confirm the anticancer benefit.

Medical experts say that powdered rice can be applied topically to cure skin conditions. On the Indian subcontinent, rice water is readily prescribed by Ayurvedic practitioners as an effective ointment to cool off inflamed skin surfaces. The phenolic compounds, particularly in the brown or wild variety, have anti-inflammatory properties, so they are also good for soothing irritation and redness. Whether consumed or topically applied, it tends to relieve a number of skin conditions. The antioxidant capacity also helps delay the appearance of wrinkles and other premature signs of aging that affect the skin.

May Reduce the Risk of Alzheimer’s Disease

The husk of rice is considered to be an effective medicine to treat dysentery. As a diuretic, it helps you eliminate toxins from the body like uric acid, and even lose weight, since approximately 4% of urine is actually made up of body fat! The high fiber content also increases bowel movement regularity and protects against various types of cancer, as well as reducing the chances of cardiovascular diseases. Chinese people believe that it considerably increases appetite, cures stomach ailments, and reduces all digestive problems.

Rice is an excellent source of vitamins and minerals like niacin, vitamin D, calcium, fiber, iron, thiamine, and riboflavin. These vitamins provide the foundation for the body’s metabolism, immune system health, and general functioning of the organs. According to a report published in the Journal of Functional Foods black rice help reduce obesity and improve metabolism among mice who were fed the same for a period of 12 weeks.

The whole grains like rice are known to have antioxidant properties that promote cardiovascular strength by reducing cholesterol levels in the body, according to a report published in the American Journal of Clinical Nutrition. Wild and brown rice varieties are far better than the white variety since the husk of the grain is where much of the nutrients are; ironically, the husk is removed in white rice preparation.

A team of researchers from New York University penned a detailed report on the recommended diet for Irritable Bowel Syndrome (IBS) in 2018 in the World Journal of Gastroenterology. In that, they concluded that a diet low in fermentable carbs known as FODMAPS is recommended for the management of this digestive disorder. Rice is a low FODMAP item, which is clinically suggested for consumption during IBS as it has resistant starch, which reaches the bowels and stimulates the growth of useful bacteria that help with normal bowel movements. Also, this insoluble rice is very useful in reducing the effects of conditions like irritable bowel syndrome (IBS) and diarrhea.

Those with diabetes should include the brown variety rather than the white one, which contains low levels of the glycemic index. As little as one cup of brown rice on a daily basis provides a person with almost 100% of their daily manganese requirement, which helps produce energy from carbohydrates and protein, says a 2010 report published in the Archives of Internal Medicine Journal. It is also beneficial for the normal functioning of the nervous system and the production of sex hormones.

According to the International Rice Research Institute in the Philippines, the nutritional value of this grain needs to be improved even more so that it benefits mankind. Being the most dominant cereal crop in most of the world, it can improve the lives of millions who consume it.

Efforts are currently being made to increase the micro-nutrient value of this grain by combining traditional methods of growing crops with modern biotechnology. The institute further states that the development of rice with high iron and zinc compounds could be possible through bio-fortification. This can also induce high-quality yields, which could be eagerly accepted by farmers as well as the consumers for longer, healthier lives.

Despite WHO recommendation to discontinue booster vaccination for diphtheria and tetanus once childhood vaccinations are completed, many countries still…