Carob may have been done a disservice by being marketed as an alternative to chocolate. While its taste is not as deep and delicious as chocolate, carob has its own merits and health benefits. Let’s find out more!

Carob usually refers to the fruit or pods of the carob tree (Ceratonia siliqua L.). Carob trees are native to the Mediterranean region and the Middle East, but the trees are now found in most parts of the world. The fruits are long, leathery, brown pods that have sweet, edible pulp and seeds. They are also known as St. John’s bread and locust bean, which stems from the belief that these pods were perhaps the locusts that sustained St. John in the wilderness. [1]

Traditionally, carob and its products have been part of the cuisine in the Middle East and Africa for several years. In Egypt, antioxidant-rich carob juice is consumed during the holy month of Ramadan. In Lebanon, carob molasses is a pantry staple and is used in baking. The molasses is also combined with tahini to make a popular dip, debess u tahineh, which can be slathered on toast. [2] 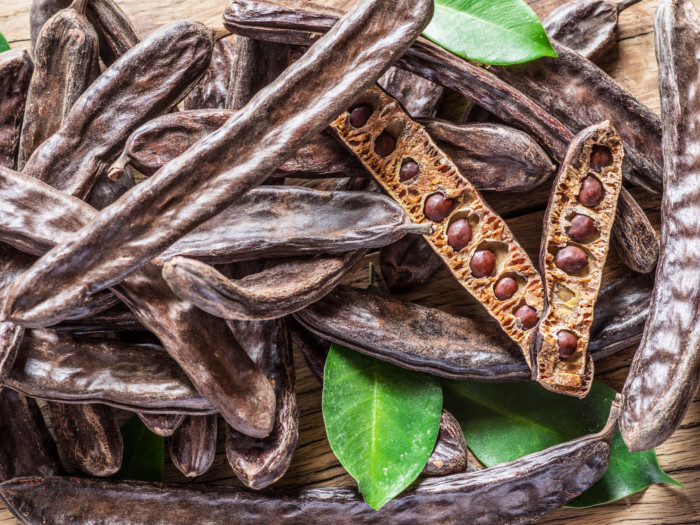 Carob powders is making a comeback as a substitute for chocolate. Photo Credit: Shutterstock

Carob products became popular as sugar alternatives when the health movement swept America and Europe in the 1970s. Carob powder or flour, made from roasted pods, was marketed as a caffeine-free and theobromine-free alternative to cocoa. Other products that appeared on supermarket aisles included carob chocolate, carob cookies, and carob chips.

While carob lacks the bitterness and depth of flavor of chocolate, it has its own unique nutty and sweet taste. What also works for it is that it is naturally gluten-free; it is increasingly being used to make gluten-free baked products.

One of the biggest industrial uses is in the food and cosmetic industry. Locust bean gum or carob bean gum is extracted from carob seeds. It is used as a thickening and stabilizing agent as well as a food additive. [3]

Carob has high sugar content (mainly sucrose, glucose, and fructose), according to a 2016 study published in the International Journal of Molecular Sciences. Its health benefits can be mainly attributed to the significant content of dietary fiber, polyphenols, and amino acids. It is also a good source of calcium, with over 300 mg in 100 grams of carob flour. This is equivalent to the amount of calcium in a cup of cow’s milk. Other minerals in it include potassium and iron. [5]

According to the USDA, 1 cup of carob flour (103 grams) contains 229 calories. It has 50.6 grams of sugar, which equals 4 tablespoons of regular sugar. It has 41 grams of total dietary fiber and 91.5 grams of carbohydrates. [6]

Let us look at why carob may be good for you.

Carob is a natural and healthy alternative to processed sugar. According to the USDA, 100 grams of carob chips contains 34 grams of sugar as compared to 100 grams of branded chocolate chips, which has 66.67 grams of sugar. [7] [8]

Some people can be sensitive to caffeine and theobromine present in chocolate. Excessive caffeine can cause anxiety, insomnia, jitters, as well as headaches. Carob can be used instead as it contains no caffeine and no theobromine. [9]

Gluten is a group of proteins found in cereals like wheat, barley, and rye that helps bread and baked products give its viscous elasticity. People with celiac disease or with sensitive digestive systems cannot consume gluten. They can use carob flour, which is gluten-free, to make bread, cakes, and desserts. A lot of gluten-free products in the market use carob extract and products. [10] [11] [12]

It is low in fat and is used to make low-fat products by the food industry. Carob bean gum is used in low-fat yogurt and the powder is used to make chocolate and candies.

A 2003 human study published in the European Journal of Nutrition revealed that carob could be beneficial to people with hypercholesterolemia. Volunteers with this health condition were given bread or fruit bars with 15 grams of carob pulp every day for 6 weeks. The test results showed a dip in LDL (bad cholesterol) by about 10 percent and a slight improvement in the LDL: HDL ratio. Also, women saw a marked improvement in their lipid profiles as compared to men, especially in triglyceride levels. Studies suggest that polyphenol-rich insoluble fiber in carob is responsible for the beneficial effect on blood lipid profile in humans. [13] [14]

Should You Try Carob?

Carob has its own unique flavor and should not be compared to chocolate as its taste is very different. However, if you are looking for a caffeine-free option to make a hot beverage, which can be termed carob tea or carob coffee, go ahead and try it. It is a wonderful natural antioxidant-rich sweetener to have in the pantry.

Rate this article
Average rating 3.9 out of 5.0 based on 225 user(s).
Read This Next:
Popular Articles