Rhubarb, part of the Polygonaceae family of plants, is a unique looking plant with a very interesting history. Scientifically, it is an herbaceous perennial with leaves growing off the top of a thick rhizome.

Although widely considered as a vegetable, in America, it is treated as a fruit, in culinary practices. The leaf stalks are actually the only parts of the plant consumed, sometimes as a dessert or an ingredient in sweet dishes.

It is cultivated throughout the year in different parts of the world and, widely available in almost any season. It can be grown in greenhouses, resulting in “hothouse” rhubarb, which is sweeter and deeper red in color, while the traditional variety is grown outside. 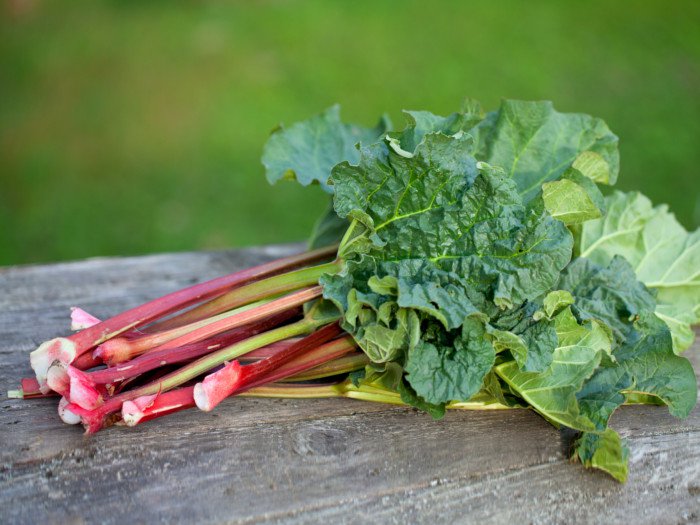 Rhubarb is a perennial plant that has stalks similar to celery. Photo Credit: Shutterstock

The taste of rhubarb is somewhat similar to that of green apples, which is to say that it is tart. Usually, people add sugar to make it sweeter and then bake or cook it.

It is also often paired with strawberries because of the lovely pair of tart and sweet that they make. Some people also often compare the taste of it with celery.

Interestingly enough, the stalks are the only things eaten from this plant. The triangular leaves are extremely high in oxalic acid, which can cause severe illnesses in people if consumed, resulting in the common belief that rhubarb is poisonous. If the plant is subject to extreme cold, the dangerous acid can migrate into the stalk, so be sure to store it in a warm or temperate space, just like the climate where it normally grows.

One of the main reasons why people cultivate and eat rhubarb is for its astounding nutritional value. It is packed with minerals, vitamins, organic compounds, and other nutrients that make it ideal for keeping our bodies healthy. According to the USDA National Nutrient Database, these precious components are dietary fiber, protein, vitamin C, vitamin K, B complex vitamins, calcium, potassium, and magnesium. In terms of organic compounds, the plant is a rich source of beta-carotene (which can be enzymatically converted to Vitamin A), polyphenols (which can act as antioxidants), lutein, and zeaxanthin.

Let’s see how the nutrients add up to the long list of health benefits that rhubarb can impart!

Rhubarb is one of the vegetables with low calories and it is often recommended for people who are struggling to lose weight but still want to remain healthy. 100 grams of the plant contains only 21 calories, so feel free to load up on it without packing on any pounds. Additionally, the fiber helps you feel full faster which can further reduce total caloric intake and promote weight loss. A study published in the Journal of Zhejiang University of Traditional Chinese Medicine showed that compounds in rhubarb can inhibit gastric emptying which may lead to enhanced weight loss.

Our digestive system plays a huge part in our overall health, so it is important to keep the digestive system healthy and regulated. The high amount of dietary fiber found in rhubarb can guarantee a healthy digestive system by bulking up the stool and making sure that bowel movements are smooth and regular. It has traditionally been used as a cure for constipation, but it was only recently discovered why it had such a powerful effect. By easing constipation and other digestive issues, you can prevent a wide range of more serious gastrointestinal disorders, including bloating and cramping.

A 2006 study published in the Brain Research Bulletin said that a rhubarb glucoside compound, rhaponticin, can protect the body against Alzheimer’s. In vitro results show the rhaponticin is positively linked to preventing the harmful effects of amyloid-beta, which are peptides of 36-43 amino acids that are crucially involved in the formation of amyloid plaques found in the brains of patients suffering from Alzheimer’s disease.

Along with its role in protecting the brain from neural degeneration, vitamin K also promotes osteotropic activity, meaning that it stimulates bone growth and repair. Combined with the rich amount of calcium and other minerals found in rhubarb, the vegetable as a whole is a major player in bone protection.

According to the researchers from the National University of Singapore, anthraquinones from rhubarb possesses anti-cancer properties and could have therapeutic potential. It is a good source of beta-carotene, which the body converts to vitamin A, protecting the skin and eyes from the effects of free radicals. Other polyphenolic compounds like lutein and zeaxanthin which also act in a similar way to vitamin A, as powerful antioxidants and cancer-preventing agents. A decent amount of antioxidants in your diet can help avoid premature aging, cataracts, macular degeneration, and wrinkles.

The trace amounts of copper and iron found in rhubarb are essential for the production of new red blood cells, necessary to maintain the total RBC count in the body. Maintaining adequate healthy red blood cells is essential for oxygenation of the body, thereby ensuring optimum function.

Rhubarb is low in carbohydrates and can be used in preparations which are diabetes-friendly. However, this is not the only reason why it will keep your diabetes in control. A 2018 study recommends the use of the essential oil extract of the rhubarb stem as an additional treatment, owing to its positive effect on fasting blood glucose levels. Another paper published in the Systems Microbiology journal suggests that rhubarb extracts can exert a hypoglycemic effect as well as improve gut microbiota.

Rhubarb contains beta-carotene, vitamin C and lutein, which are compounds that are beneficial for vision and protective to the retina.

This amazing plant can also help with perimenopause symptoms by reducing the occurrences of hot flashes, due to the presence of phytoestrogens.

Rhubarb being rich in vitamin A, an antioxidant, helps fight off free radicals and therefore delays the signs of aging including wrinkles and fine lines. It also acts as an antifungal and antibacterial agent and prevents skin infections and acne.

How to Store Rhubarb?

Before you store your rhubarb, you need to make sure its stalks are crisp and have a reddish tinge to them. Make sure the leaves are attached (not drooping) to ensure that it is still fresh. Once you’ve bought rhubarb, store it as follows.

How to Freeze Rhubarb?

Note: Make sure to thaw and drain the frozen rhubarb before using it.

Rhubarb first appeared in the United Kingdom approximately 400 years ago and has since become highly prized for its unique flavor and sweet taste around the world. It is used in various dishes and recipes including the following:

Rhubarb is also used for medicinal purposes in traditional Chinese and medieval Arabian and European medicine. The roots of this plant have been used as a laxative for thousands of years.

Word of Caution: Due to the potent nature of rhubarb, you should avoid it if you have a pre-existing kidney condition or certain gastrointestinal conditions (as it is high in potassium), as rhubarb can make them worse. Also, be careful that children or pets do not eat the rhubarb leaves. There have been some cases of death due to the toxic levels of oxalic acid contained in the leaves. Rhubarb stalks, however, are healthy and delicious, so enjoy!