11 Health Benefits of Dandelion, How to Eat & Side Effects

To many of us, a field of dandelions may conjure images of skipping through a field or a relaxing day in the park. While it is considered to be a weed-type plant by many, the health benefits of dandelion are more than you might expect. They include relief from liver disorders, diabetes, urinary disorders, jaundice, and even anemia. It has helped in maintaining bone health, skincare, and weight loss. Moreover, dandelion is also known to aid in improving appetite, reducing muscle pain, stomach disorders, and it helps treat bruises as well.

Dandelion is a flower and is a broad term for many types of flowers that are native to Europe and North America. Taraxacum is the large genus to which these plants belong. They are herbaceous and perennial plants that grow very well in temperate climates. They also reproduce quickly and effectively, so it is possible to cultivate plenty of dandelions at the same time. Interestingly, dandelion translates into a “lion’s tooth” in French.

Despite the health benefits of dandelions, they are more popular as ornamental flowering plants than as a medicine. These flowers have a yellow color and are frequently seen in gardens and parks. In terms of history, the plant is believed to have evolved about 30 million years ago in Eurasia. 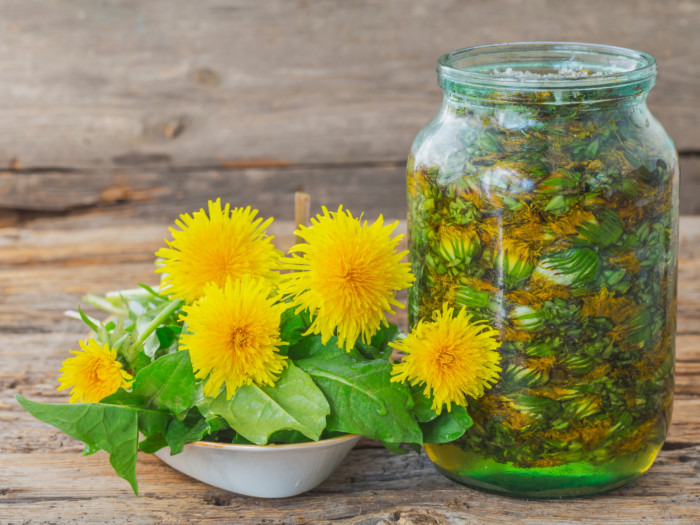 Dandelions and dandelion green are low in calories and rich in carbohydrates and fiber, according to the USDA Nutrition Database. It contains vitamins A, B6, C, and K as well as minerals, iron, calcium, magnesium, potassium, and sodium.

Let us understand the different health benefits of dandelions below.

A study published in the Korea Food Research Institute has found that dandelion leaf extract may be an effective intervention of providing relief from non-alcoholic fatty liver disease.

It is also thought by some that the antioxidants like vitamin C and luteolin, in dandelions may keep the liver functioning in optimal gear. These nutrients protect it from toxins and help treat hemorrhaging in the liver.

A study published in 2017 states that inulin, a carbohydrate, is very helpful in maintaining a healthy gut. It turns out that dandelions contain a good amount of inulin, so adding it to your diet can contribute to improved bacterial flora in the intestinal tract.

Dandelion supplements aid in maintaining the proper flow of bile, while also stimulating the liver and promoting digestion. Being rich in fiber, dandelions also aid in lowering the risk of dyspepsia, diverticulosis, and irritable bowel syndrome (IBS). Dandelion is commonly prescribed for children who are experiencing constipation, as it is relatively soothing on the stomach.

A research study published in The Review of Diabetic Studies revealed that dandelion exhibits promising anti-diabetic properties. Dandelion juice aids people with diabetes by stimulating the production of insulin from the pancreas, thereby regulating the blood sugar level. Regulated blood sugar and maintained insulin level may help prevent dangerous spikes and plunges in people with diabetes.

Dandelion sap, also known as dandelion milk, is useful in treating skin diseases, which are caused by microbial and fungal infections. This treatment stems from the fact that the sap is highly alkaline and has germicidal, insecticidal, and fungicidal properties. This sap can be used on itches, ringworm, eczema, bruises, and other skin conditions without the risk of side effects or hormonal disturbances commonly caused by pharmaceutical skin treatments.

Dandelion juice is effective against acne. Being a stimulant, diuretic, and detoxifier by nature, it can help regulate proper secretion of hormones, increase sweating, and widen the pores.

Dandelion sap, if externally applied, can inhibit microbial infection and reduce the signs of acne. Also, it can speed up healing due to its vitamin C content, so acne scars and inflammation will be less noticeable.

As mentioned earlier, dandelions promote urination and help in losing water weight without causing any side effects. They are naturally sweet in taste, and low in calories, which is why they are often used as low sugar sweeteners. Furthermore, a study conducted on the effects of various plants on obesity mentioned dandelion as an important plant with potential use on obesity.

Dandelion extracts are high in antioxidants such as vitamin C and luteolin, which reduce free radicals in the body, thereby potentially reducing the risk of cancer. A report by Dr. Arnab Roy Chowdhury, Dr. Shalini Sharma, and others, in the Biochemical Journal states that luteolin poisons essential components of cancer cells when it binds to them, rendering them ineffective and unable to reproduce.

Dandelion has been traditionally used to relieve symptoms of hepatitis and according to research, the dandelion supplements may aid in treating hepatitis. Another study suggests that dandelion may help protect the immune system against various diseases with the potential for developing therapies for certain diseases with reduced side effects. It has antimicrobial properties and may aid in preventing bacterial infections. A 2018 study suggests antibacterial against Staphylococcus aureus bacteria.

Dandelions have good levels of iron, vitamins, and protein. While iron is an integral part of hemoglobin in the blood, vitamin B and protein are essential for the formation of red blood cells (RBCs) and certain other components of the blood.

Dandelion juice, being diuretic in nature, increases urination, both in quantity and frequency. The fiber in it is also helpful in reducing cholesterol and thereby assists in providing relief from hypertension. The high potassium content in dandelions is very effective in lowering high blood pressure by replacing sodium.

As discussed, vitamin A, calcium, and iron are found in dandelions, which are great nutrients for any mom-to-be. It can help relieve mild edema and nourish the liver. It also aids in the third trimester as it can protect pregnant women from night blindness.

How to Eat Dandelions?

There are many ways to include dandelion in your diet as it is available in many forms.

Side Effects of Dandelions

There are a couple of side effects when you include dandelions in your diet. They are:

Note: It is advised that pregnant and breastfeeding women should exercise caution before consuming any herbal tea in any form as it may lead to adverse effects.

Consult your doctor before adding dandelion or its supplements in addition to your normal treatment.

While adding dandelions to your diet in any way, start small and closely monitor your body’s response. Other than that, pick some delicious dandelion greens and get healthy!

As policymakers across the world are still grappling with the unprecedented coronavirus outbreak, we can learn valuable lessons from our mistakes. A recent…

© 2020 Organic Information Services Pvt Ltd. Information on this website is for education purpose only. Consult a medical practitioner for health problems. Organic Facts may receive a portion of revenues if you click on the sponsored ads and links by Google, Ezoic, or the Amazon Affiliate program.