Poppy seed tea has been consumed for thousands of years for its many benefits, including the ability to relieve pain, soothe nerves, prevent gastric distress, lower blood pressure and improve mood. That being said, poppy seed tea is highly controversial, as poppy seeds are also used to make opium, and the active ingredients are powerful chemicals that can be addictive when regularly consumed.

If you want to make poppy seed tea, do so with extreme caution and do not use the tea on a regular basis. 1-2 per week is the maximum recommended amount, and be very careful when preparing the tea, in terms of the amount used and the concentration of the tea itself. [1]

Despite the risks associated with this tea, there are also many health benefits when it is consumed responsibly and in small amounts, including better heart health, lower stress levels, analgesic effects, treat diarrhea and boost mood.

It is important to note that this tea does have narcotic properties, owing to the two types of alkaloids found in the seeds – phenanthrenes and benzylisoquinolines. The former is where morphine and codeine come from, and these chemicals will bond to the opioid receptors in the body, providing the majority of the benefits listed below. When consumed too frequently, or in too high of a concentration, poppy seed tea can be addictive, and even fatal, similar to a heroin or painkiller overdose. [2]

For those who want to responsibly use poppy seed tea, it can effectively deliver a number of health benefits. 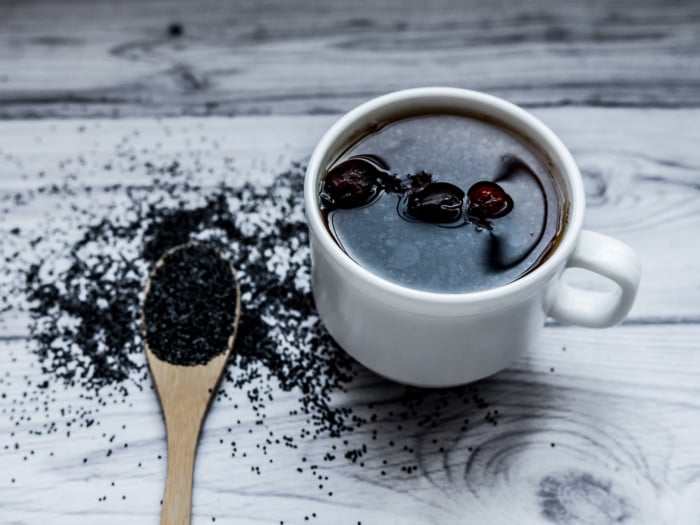 The psychoactive compounds found in poppy seed tea can elevate your mood by relaxing your muscles and mind. As with many powerful painkillers, it can provide a sense of euphoria or pleasure, which can eliminate depressive episodes and provide a burst of positivity.

The primary function of poppy seed tea is as a pain reliever, which is why morphine and codeine are both derived from this plant. If you are suffering following a surgery, injury, or extended illness, or regularly experience chronic pain, this opioid derivative can have a powerful analgesic effect. [3]

Due to the relaxing nature of poppy seed tea, it has the ability to reduce tension in the arteries and veins, which helps to lower blood pressure and slow your heart rate. This can be beneficial for those suffering from hypertension or cardiovascular health issues. [4]

High levels of stress hormones in the body can be detrimental to long-term health. The analgesic and sedative properties of poppy seed tea can help ease tension in the mind and lower those chronic stress hormone concentrations in the blood.

The chemical compounds found in poppy seed tea can regulate your bowel movements if you are struggling with diarrhea. In those with normal bowel movements, this tea can occasionally cause constipation, which is yet another reason why this tea should be consumed in careful moderation. [5]

Poppy seed tea is a powerful sedative, so if you are suffering from insomnia or other sleep disorders, this tea can be an occasional at-home remedy that delivers an undisturbed night of sleep. [6]

Poppy seed tea, as mentioned above, is a narcotic substance, and should be used and prepared with extreme caution. In small, infrequent amounts, the tea can help with certain aspects of health, but if consumed regularly, it can cause you to become addicted. Some of the side-effects that people suffer include: [7]

There are many other herbal teas on the market that have similar effects and do not cause physical or psychological addiction. Unless you are trained in preparation and only plan to occasionally consume this tea, choose another option for your natural health goals. It is also critical that you speak with a trained physician before adding poppy seed tea to your health regimen, as it can negatively interact with other medications and may exacerbate health conditions. Poppy seed tea should not be considered a means of curing opioid addiction; it is simply a different, legal and readily available form of these dangerous drugs. [9]

Note: Use of poppy and its seeds is banned/restricted by some countries such as UAE, Dubai, and Saudi Arabia so consult your local health specialist before use.

Rate this article
Average rating 4.0 out of 5.0 based on 123 user(s).
Read This Next:
Popular Articles