Red Raspberry Leaf Tea For Pregnancy And Other Benefits

It is said that red raspberry leaf tea has traditionally been used to stimulate fertility, ease pregnancy, and shorten labor. While long-term researches on its efficacy are limited, it is still one of the most popular herbal teas used by midwives in the US. Some studies suggest that it may also help in strengthening our immune system, improving digestion, and reducing inflammations.

Raspberry tea is made from the leaves of raspberries after they are dried and crushed. Interestingly, the tea doesn’t have the sharp tang of a raspberry; instead, it tastes more like floral black tea and has an impressive collection of nutrients, vitamins, and antioxidants. It is rich in tannins and flavonoids. In fact, the flavonoid content of the leaves is more potent than the fruits of the plant. [1]

Red raspberry leaf tea may have been traditionally used as an herb for fertility and easing pregnancy. In fact, it was once known as the female herb. Although research in its efficacy is lacking and often inconclusive, it is still quite popular and used by midwives to ease delivery. There are many reasons red raspberry leaf tea is often referred to in connection with pregnancy.

Traditionally, red raspberry leaf tea has been used to stimulate fertility in women. According to The Everything Fertility Book, it was believed to be a uterine tonic, which could ‘tone’ your uterus for pregnancy. It was believed a woman was more likely to conceive if her uterus was ‘toned’. Some people also believed that it improved hormonal balance in women, improving their chances of getting pregnant. [3] 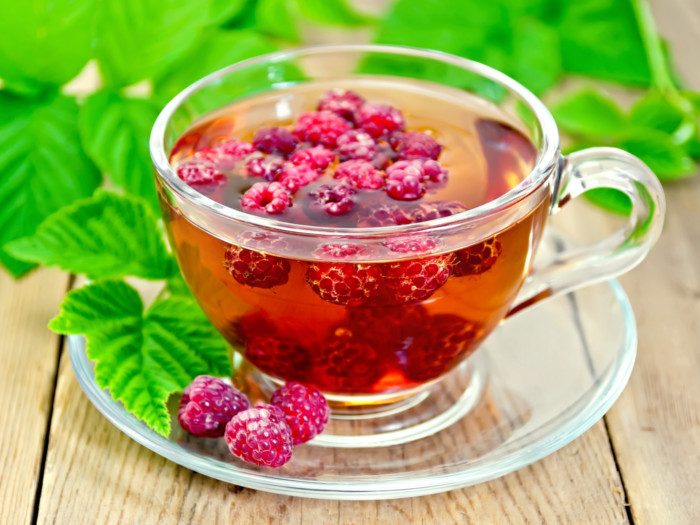 May Help During Pregnancy

So popular was the red raspberry leaf tea for this purpose, that it was also known as pregnancy tea. Writing for Integrative Strategy During Pregnancy, the author mentions how it was used to ease morning sickness, relieving nausea, preventing miscarriage, and ensure timely delivery. The flavonoids present in the raspberry leaf may also help in the general well-being of the pregnant woman. [4]

The main purpose of the red raspberry leaf tea was quickening delivery for a pregnant woman. It was believed to induce labor. However, as pointed out in Integrative Medicine, it can actually aid blood flow to the uterus, which may help its contraction. However, the research on this is still unclear. One observational Australian study suggested that it may shorten labor without any side-effects. [5] [6]

However, a UK-based NHS study found that the ingestion of red raspberry tea made no difference to the length of labor. Nevertheless, it continues to be popular as a labor-inducing remedy. A national survey of herbal remedies used by nurse-midwives in the US revealed that 63 percent of the practitioners used the tea to stimulate labor. [7] [8]

Red raspberry leaf tea can not only shorten labor but may also help in reducing the chances of birth complications. Many midwives use them to relieve labor pains. The Australian research quoted earlier seemed to support this. The researchers also found that women who had red raspberry leaf tea were less likely to go through an artificial rupture of their membranes, a cesarean, forceps, or vacuum birth than women who did not.

To know more about pregnancy teas, read our Guide To Pregnancy Tea: What To Take & What To Avoid.

Other than pregnant women drinking raspberry leaf tea may just be as beneficial for people suffering from cold, flu, psoriasis, eczema, acne, obesity, indigestion, constipation, high blood pressure, aching joints, and general inflammation. Raspberry leaf tea may be packed with potassium, iron, magnesium, vitamin C, vitamin B, and vitamin E, along with several powerful antioxidants and alkaloids that give the tea such a diverse range of health benefits. [9] [10] 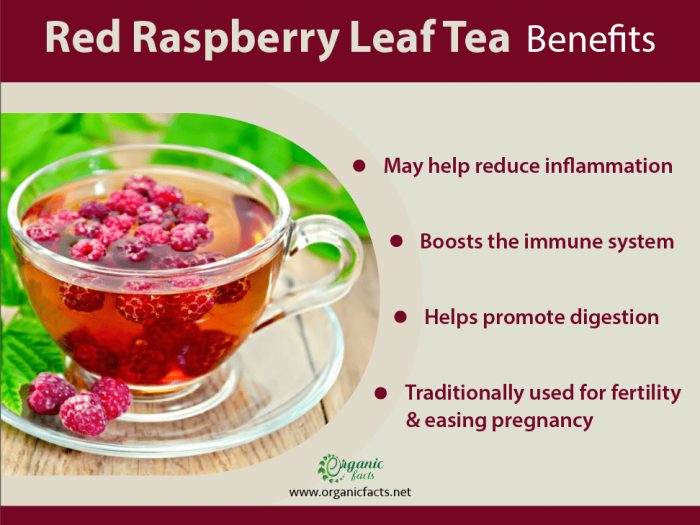 Raspberry tea is made from the leaves of raspberries after they are dried and crushed.

The anti-inflammatory properties of raspberry leaf tea may help in symptomatic treatment for mild diarrhea. Herbalists preferred the tea for its ability to soothe inflammations. It is an astringent herb with a high tannin content, which can make it effective in relieving diarrhea-related conditions. In excess, however, these effects make this tea a laxative, so consume in moderation. [11]

A 2016 research shows that raspberry leaves have excellent antioxidant properties. In fact, the antioxidant activity is much stronger than that of blackberry leaves. Vitamin C in raspberry leaf tea may help enhance the functioning of the immune system and may stimulate the production of white blood cells in the body. [12]

The polyphenolic compounds in red raspberry are responsible for its anti-inflammatory properties. Animal studies with red raspberry extract have shown that it can reduce the severity of arthritis, inhibit inflammation, cartilage damage, and strengthen bones. [13]

May Help In Skin Care

Raspberry leaf tea may even help in treating chronic skin conditions. Due to its high levels of vitamin E and C, as well as various antioxidants, it can help soothe skin inflammations. It may also be used topically or taken orally for a short period. [14] [15]

To make the tea, steep a tablespoon of the dried leaves in a cup of boiling water. Alternatively, use a teabag. You should steep the tea for at least 5 minutes. Strain the tea leaves before drinking. It has a pleasant taste and is usually taken without any additives. You may add a little honey if you wish. You can drink the tea hot or cold.

You can buy the tea from a specialist, a herbalist, or order online. There are many options available today. It is always preferable to buy organic teas to avoid any impurities. You can ask your doctor or herbalist for a recommended brand. When buying the tea, do make sure that it is made from the leaves and not the fruit. Check the label for any additives, especially if you are pregnant. Always make sure with your doctor or midwife that it is safe to ingest.

Most herbalists and women who have used raspberry leaf tea during pregnancy suggest adding the tea to your health regimen no later than week 32, not earlier. This will give the tea enough time to build up in your body. It takes a bit of time for the uterus wall to increase in strength, and by using the tea for a month before your expected delivery date, it may have a much better chance for the desired effect. [16]

Generally speaking, you can begin drinking the tea as early as the second trimester, but some specialists do not advise drinking it beforehand. Some of the compounds in raspberry leaf tea can stimulate uterine contractions, which could potentially bring on a miscarriage. As with any herbal remedy, particularly one so directly linked to pregnancy and childbirth, speak to your doctor, midwife, or doula about the healthiest option for you and your baby. [17]

How Much Should I Drink to Induce Labor?

There is no standardized research-backed dosage available for the tea. The usual practice is to start small and then increase your dosage if there are no side-effects. Talk to your doctor or midwife on the correct dosage and how to start your intake. Keep in mind that it can cause uterine contractions and hence, expert advice is highly recommended.

When starting with raspberry leaf tea, it is best to start with 1 cup per day and see how your body reacts. If you don’t experience any side effects, you can gradually start increasing that amount up to 2 cups daily. This will give enough time for the active compounds to build up in your body. [18]

Side Effects of Raspberry Leaf Tea

Red raspberry leaf tea is generally considered safe. No long-term effects have been reported. However, there are some factors one should be aware of:

During pregnancy: The tea is recommended only in the third trimester. While some women may choose to take it during the second trimester, it should be avoided during the first trimester. There are some concerns that it can stimulate the uterus and can potentially cause a miscarriage. [19]

According to the NHS, you should avoid taking red raspberry leaf tea if: [21]

Do not drink multiple cups of the tea in one go to hasten the labor if you are overdue. This can cause intense contractions that can distress the baby.

Although the use of red raspberry leaf tea is common during pregnancy, it is always advisable to speak to your doctor or midwife before you start taking it. Always start with one cup to see if it suits you. You can increase your intake to 2 cups after that. Keep in mind that there are no studies on the standard dose of the tea. It is advisable to avoid long-term ingestion or heavy consumption (more than 3 cups a day).

Finally, if you are taking other anti-anxiety or sleeping medications, speak to a medical professional before adding this tea to your daily diet as there could be complications.

Rate this article
Average rating 3.9 out of 5.0 based on 874 user(s).
Read This Next:
Popular Articles