Iodine is an essential trace element, which is vital for normal growth and development of the body. Around 60% of the iodine in the human body is stored in the thyroid gland. Its health benefits play a very important role in the normal functioning of the thyroid gland, which secretes thyroid hormones that control the base metabolic rate of the body. In fact, without it, thyroid hormones could not even be synthesized.

Iodine controls the functioning of thyroid glands, which, in turn, has a significant influence on the metabolic processes in the body. It helps in the optimum utilization of calories, thereby preventing their storage as excess fat. Other benefits include the removal of toxins from the body and assisting the system in utilizing minerals like calcium and silicon.

A deficiency of iodine can have serious effects on the body. The symptoms of its deficiency include the following:

It is somewhat rare for this deficiency to occur in North America, as many food items are either grown in iodine-rich soil or contain salt, which is often iodized in some nations. However, many countries do not iodize their salt and regions that grow crops and livestock at a great distance from coastal waters are less likely to have iodine-rich soil. The body needs 100-200 mcg of iodine per day, and 1/4 teaspoon of iodized salt contains approximately 95 mcg of iodine, so you can see why regions with access to iodized salt are less likely to suffer from iodine deficiency.

It is present in large quantities in both marine plants and animals, including shellfish, deep-water whitefish, and brown seaweed kelp, which can absorb iodine from seawater.

Iodized salt is another important source and bakers regularly add iodine to bread dough as a stabilizing agent. 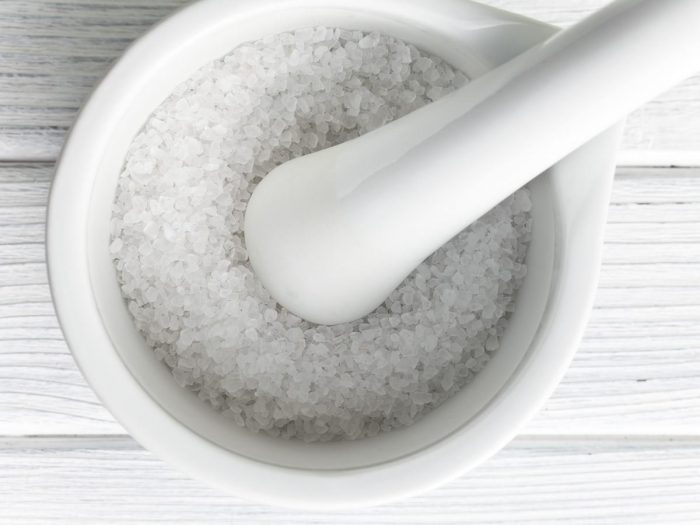 This element is required to ensure proper development and metabolism in humans. The specific health benefits include:

Iodine influences the functioning of thyroid glands by assisting in the production of hormones, which are directly responsible for controlling the body’s base metabolic rate. Metabolic rate affects the efficacy of the organs and regular processes like the sleep cycle, and the absorption of food and its transformation into usable energy.

Certain hormones, like thyroxine and triiodothyronine, influence heart rate, blood pressure, body weight, and temperature. The body maintains BMR (Basic Metabolic Rate) with the help of these hormones, which also helps in protein synthesis. Ensuring their normal creation and distribution in the body is key to maintaining good health.

Iodine plays an important role in maintaining optimal energy levels of the body by ensuring the efficient utilization of calories without allowing them to be deposited as excess fats.

The health benefits of iodine include the formation of healthy and shiny skin, teeth, and hair. It is an important element for hair care, as lack of this mineral can result in hair loss. Moreover, it also speeds up hair growth and increases follicle strength.

A sufficient quantity of iodine in pregnant women is essential to prevent stillbirths or neurocognitive conditions like cretinism in newborn babies. It can lead to gestational hypertension, which can result in several complications during infancy. It ensures proper movement and growth of the baby, along with speech and hearing abilities. Furthermore, besides affecting the health of the baby once it is conceived, a deficiency of iodine can make women infertile.

One problem that many pregnant women face is not realizing that they must consume iodine for the child and themselves as well because it passes into breast milk and a great deal is lost every day. Studies show that a pregnant or nursing woman can lose more than her entire required dose of iodine every day, which can result in a serious deficiency for her, even after pregnancy and breastfeeding are over.

Iodine helps boost the overall immunity levels in the body as it is a scavenger of free hydroxyl radicals. Like vitamin C, it also stimulates and increases the activity of antioxidants throughout the body to provide a strong defensive measure against various chronic diseases. Studies show that it directly protects the brain cells of rats from harmful effects of free radicals by connecting to fatty acids in the cell membranes.

This condition is characterized by an under-active thyroid gland and results in the general slowing down of all bodily processes as the chemical balance in the body goes off track. One of the most common results of hypothyroidism is a large increase in weight because the body simply doesn’t burn off the calories to turn them into energy. Although hypothyroidism can occur for many reasons, not just iodine deficiency, it is still a good idea to increase your intake of iodine and stimulate the hormonal activity, which will eventually help you lose weight.

Some other effects of hypothyroidism are fatigue, dry skin, troubled concentration, constipation, cramps, and leg swelling. If not treated, it can result in serious conditions like heart failure or a coma.

According to a 2017 study published in the Journal of Cancer, iodine deficiency may increase the risk of developing breast cancer. In terms of thyroid cancer, iodine is essential in preventing this extremely dangerous form of cancer. A study published by Luigino Dal Maso, Cristina Bosetti, Carlo La Vecchia, et al, in the Cancer Causes and Control Journal suggests that thyroid cancer patients consistently show a decrease in cancer symptoms after increasing their levels of iodine intake. Maintaining optimal levels of this nutrient may help in lowering the incidence of cancer – breast and thyroid cancer.

Studies have shown that cancer cells shrink after being injected with iodine, and at times, they even undergo apoptosis (automatic cell death) and are then replaced with healthier cells. The exact mechanism of this process is still unknown, but according to a study published in the Journal of Biological Chemistry, there is a positive connection, particularly in terms of its effects on inducing apoptosis in breast cancer carcinoma cells.

According to a report in the Journal of Biological Chemistry, iodine ensures apoptosis or programmed cell death. This process is essential in the formation of new organs as well as in the removal of malignant cells like cancer or diseased cells, which might prove harmful to any individual.

Iodine can flush out harmful chemicals like fluoride, lead, mercury, and biological toxins. The role of this extrathyroidal iodine that does other work throughout the body is very important. It has certain antibacterial qualities, particularly against Helicobacter pylori, which is a dangerous bacterial infection in the stomach, more commonly called H. Pylori and has been connected with gastric cancer.

Iodine deficiency is widely recognized as the cause of goiter. You should add eggs, salt, seafood, and dairy products to your diet to avoid this deficiency. This also often works as a remedy for an enlarged thyroid gland.

Word of Caution: An iodine overdose of more than 2,000 mg could be dangerous, especially for people suffering from kidney disorders or tuberculosis. When taken in excess, it could result in thyroid papillary cancer. Pregnant women and nursing mothers should be cautious about taking it, except in specifically prescribed doses. A healthy balance is required because different people react differently to the dose, so be careful while consuming.