In the battle between coconut oil and olive oil, both of these oils have different advantages for cholesterol levels, heart health, energy, weight loss, antioxidant activity and inflammation. At their essence, both of these oils are primarily made up of fats, along with some vitamins, nutrients and antioxidants, but the different combination of components results in different health benefits and applications.

Medium-chain triglycerides (MCT) are also able to improve metabolic efficiency, stimulate weight loss, regulate blood sugar levels, protect the hair and skin from oxidative stress, detoxify the body and improve digestive efficiency. That being said, some of those benefits are derived from vitamin E, which is only present in rather small amounts in coconut oil (source: USDA), as compared to olive oil. [2]

In terms of cooking, coconut oil has a much higher smoke point (the temperature at which the oil will begin to burn, and rapidly lose its nutrient density and healthy effects). Furthermore, burning oils quickly denature into carcinogens, which are decidedly bad for your health in many different ways. Coconut oil doesn’t begin to burn until about 350 degrees Fahrenheit, which makes it better for high-heat applications, such as frying food or sautéing your meats. [3] 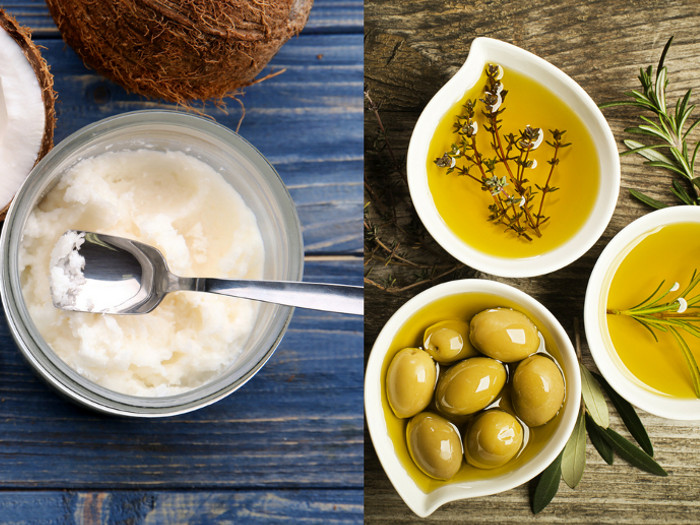 Compared to a tbsp of olive oil, a tbsp of coconut oil has 6 times the amount of saturated fat. Photo Credit: Shutterstock

Monounsaturated fats are also closely associated with lowered inflammation levels throughout the body, as well as protection against cardiovascular disease. Furthermore, olive oil has more than 100 times as much vitamin E, making it far more powerful for skin treatments and the prevention of oxidative stress.

In terms of cooking, as mentioned above, the smoke point is very important to consider for the impact an oil can have on your health. The smoke point of extra virgin olive oil is roughly 320 degrees Fahrenheit, about 30 degrees lower than coconut oil. If you choose high-quality extra virgin olive oil (with low acidity), that smoke point jumps to over 400 degrees Fahrenheit. In other words, depending on the type of food you are cooking (and at what temperature), you should choose your particular type of olive oil carefully. [5]

This means that in some circumstances, coconut oil is superior to olive oil, and in other scenarios, the reverse is true. The two oils also have slightly different tastes and won’t flavor food in precisely the same way. The health benefits of both oils outlined above should also be considered when debating which is “healthier and better”. Some people choose coconut oil for its versatility and antibacterial, antioxidant and antiviral properties, while others turn to olive oil to keep their heart healthy and their inflammation under control. [6]

Both oils rank highly in terms of the “best” alternative oils to cook with, but neither is definitively better than the other!

Can I Use Coconut Oil Instead of Olive Oil in Baking?

You can definitely use coconut oil in baking, rather than olive oil, but it is important to use it in the right form. Coconut oil has a low melting point (76 degrees Fahrenheit), so it acts very similarly to butter when used in baking applications. If you typically use olive oil in your baking, coconut oil can replace it at a 1:1 ratio without any major changes to the consistency or quality of the baked goods. [7]

That being said, coconut oil does tend to increase its “coconut” flavor when cooked, which might not be what you want for all of your cakes, cookies, brownies etc. Refined coconut oil tends to have less of this coconut taste, so that may be a better option. If you commonly use olive oil as a non-stick base for your pans while baking, coconut oil can also serve that important purpose.

Those who regularly bake with coconut oil typically recommend this oil for crusts and frostings, as well as cakes, brownies and crumbles, particularly anything that includes overly sweet or citrusy flavors in the ingredients. The flavor of coconut blends well and adds a delightful touch to the desserts. There is certainly nothing wrong with using olive oil in your baking efforts, but if you’re interested in switching over to coconut oil, don’t be afraid to include it in your next lemon meringue pie!

Rate this article
Average rating 3.8 out of 5.0 based on 66 user(s).
Read This Next:
Popular Articles