Maracuja oil has a number of proven health effects such as reducing oxidative stress, moisturizing the skin, preventing inflammation and itchiness, aiding sleep, lowering stress, boosting the respiratory system, eliminating sunburn, calming the nervous system, and regulating menstrual symptoms, among others.  Unfortunately, use of this oil does come along with certain side effects, including irregular heartbeat, dizziness, cognitive confusion, skin inflammation and gastrointestinal distress, as well as complications with surgery and certain medical conditions, such as pregnancy. Responsible and moderate use of this oil, however, can provide an impressive range of health benefits.

Derived from the passionflower plant, which bears the name Passiflora edulis,  [1]maracuja oil is extremely popular in South America, as this plant is native to Brazil and nearby countries. However, its potent mixture of active compounds and potential  health benefits has enabled its spread throughout the world. Used for thousands of years in different forms, even by the ancient Aztec empire, the pure form of this oil is now often used as a topical remedy, as ingestion is generally not recommended, due to potential toxicity. The many health benefits of this natural oil are credited to the high levels of linoleic acid, oleic acid, quercetin, flavonoids, vitamin A and vitamin C, as well as various other minerals, vitamins, and antioxidants.

With high levels of vitamin C, bioflavonoids, alkaloids and other antioxidants, this oil packs a serious punch for anyone experiencing oxidative stress in their tissues. These antioxidants are able to eliminate free radicals and lower your chance of excess inflammation throughout the body. [2]

One of the most effective uses of this oil is a soothing agent for the nervous system. This goes beyond simple stress reduction, but can also impact nervous disorders, such as muscle spasms and epilepsy, in addition to enhancing your mood and allowing your body to relax. [3]

When topically applied to sunburn, maracuja oil can suck out the “heat” of sunburn by eliminating inflammation and stimulating healing. The antioxidants present in this oil can further prevent oxidative stress and cellular mutation associated with sunburns. [4]

For other skin conditions, aside from sunburns, maracuja oil offers anti-inflammatory benefits for conditions like eczema, psoriasis, rosacea, and acne. It has both antibacterial and antioxidant compounds, which can help to improve the appearance of the skin, minimize wrinkles and age spots, and even increase the elasticity of the skin. Furthermore, this oil is an emollient, meaning that it can lock in moisture to prevent dry skin and itching. [5]

The anxiolytic properties of this oil allow it to eliminate symptoms of stress and anxiety, which can cause an unhealthy buildup of stress hormones in the body. Stress can significantly impact your personal and professional life, while also causing unwanted inflammation, fatigue, and mental exhaustion. Applying a few drops on the temples, neck or chest – or using this oil as an aromatherapy ingredient – can help with your chronic and acute stress levels. [6] 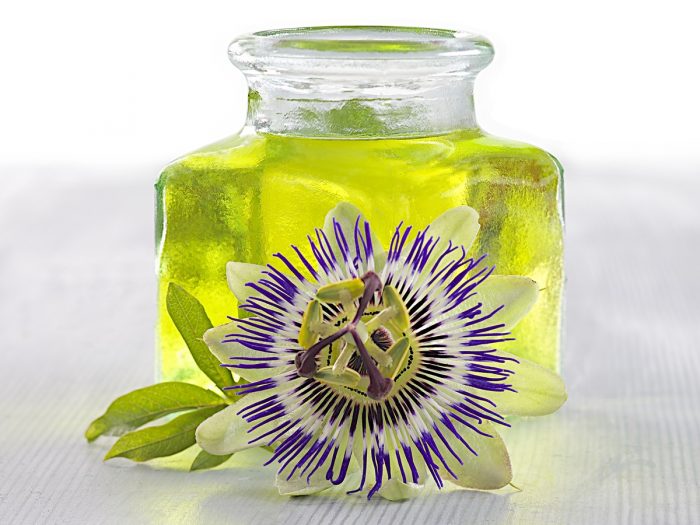 Traditional uses of maracuja oil include its use for women going through painful menstruation. This oil is able to reduce cramping by relaxing the muscles, as well as minimizing mood swings by helping to balance hormone levels. It can also lower levels of anxiety or depression that occasionally accompany menstruation. [7]

As a sedative and calming agent, maracuja oil can be a powerful sleep aid and is often used for that purpose. Harman is one of the chemical sedatives found in this oil, which can eliminate symptoms of insomnia and restlessness, allowing you to have an uninterrupted night’s sleep and a refreshed feeling in the morning. [8]

Although most common uses of maracuja oil relate to its impact through topical use, maracuja oil is extremely rich in polyunsaturated and monounsaturated fats, which can help to balance cholesterol. In the past, small amounts of this oil were consumed in the form of an infusion and even added to certain meals. While this oil is typically not recommended for consumption, careful use of this oil can lower cholesterol levels and blood pressure, which can be an extra benefit for your cardiovascular health. [9]

This oil is often applied for topical or localized pain, particularly acute pain from muscle strains and other injuries. Maracuja oil is also useful for topical pain, as well as the pain associated with injury, surgery or extended illness. Drinking a tea brewed with a few drops of this oil has been traditionally used for aches and pains throughout the body, aided by the anti-inflammatory effects of the oil. Again, only small amounts are necessary, and it is best to speak with your doctor before using this oil. [10]

Being rich in certain carotenoids, including lycopene, this oil can aid vision health through its antioxidant effects. As you age, cataracts and macular degeneration can be difficult to avoid, but the antioxidants in this oil can seek out those free radicals and keep your vision strong as you age. [11]

Side Effects of Maracuja Oil

There are some important side effects to consider before using maracuja oil, which can impact your cardiovascular, gastrointestinal and nervous systems, as well as complicate pregnancy and other medical conditions for which you are taking medication.

Rate this article
Average rating 4.2 out of 5.0 based on 17 user(s).
Read This Next:
Popular Articles