Monoï oil has a number of important side effects, such as moisturizing the skin and hair, slowing signs of aging, balancing cholesterol levels, soothing inflammation, preventing oxidative stress, minimizing allergic reactions, protecting against sun damage, strengthening the immune system and promoting good sleep habits. There are some side effects associated with the use of monoi oil too when consumed, namely skin irritation, or gastrointestinal distress when consumed. Although internal consumption of monoi oil isn’t necessarily toxic, the oil can be quite expensive and is primarily intended as a topical oil for the skin and hair.

What is Monoi Oil?

This unique tropical oil is made by soaking the petals of Tahitian gardenias in coconut oil. As the name of the flower implies, this oil is native to French Polynesia and nearby regions, where both the flower and coconut trees grow in high numbers. The gardenias are also known as Tiare flowers, so this natural remedy is sometimes referred to as tiare oil. This powerful oil has been used for thousands of years by the native people of that region, and is considered culturally sacred, due to its use in religious ceremonies, as well as its protective abilities against harsh environmental conditions. The combination of pure organic coconut oil with the high levels of vitamin E and methyl salicylate found in the gardenia flowers makes this a very effective tonic for the skin and hair. [1]

This tropical oil is an excellent moisturizer, so when it is rubbed into the scalp, it can effectively lock moisture in the scalp, which will prevent dry skin and flaking. If you regularly struggle with dandruff, daily use of this oil for 1-2 weeks, or whenever your dandruff flares up, should be enough to neutralize the symptoms.  [2]

When your hair dries out, or becomes nutrient deficient, it can no longer retain its shape, and begins to break down, resulting in split ends. Making a hair mask with monoi oil, however, can help increase your hair strength and prevent breakage and split ends, leaving your hair looking and feeling healthy. If you suffer from constantly frizzy hair, this oil can also quickly tame your locks!  [3]

Premature hair loss is the result of a number of factors, including poor nutrient delivery to the hair, environmental stress, topical infection or insufficient blood flow, among others. If you want to stimulate the growth of new hair, and protect the hair that you already have, massaging your scalp with monoi oil once per week is a quick and simple strategy to protect your hair. [4]

The skin is the largest organ in the body, and is also the most exposed to the elements. This means that your skin is constantly bombarded by airborne pathogens, allergens and irritants that can do damage. The antibacterial and anti-fungal effects of coconut oil, in combination with the counter-irritant effect of methyl salicylate, can keep your skin (and the rest of your body) safe from infection. [5]

Coconut oil has a number of antioxidant properties that make it one of the most highly sought after and useful natural remedies. When you use monoi oil on the skin, you will similarly benefit from the effects of lauric acid, which can seek out free radicals and neutralize them before they can cause oxidative stress. This can help reduce the appearance of wrinkles, improve the feel of your skin, and even lower your risk of skin cancer.  [6]

Spending time out in the sun is a part of life, but protecting your skin against solar radiation is crucial. Although this oil shouldn’t be fully relied on as a sunscreen, research has shown that it can block some UV rays from penetrating the skin. If you do suffer from a sunburn, monoi oil can be applied to soothe the inflammation, eliminate pain, and speed the healing process of the burn. [7]

Many people in French Polynesia use monoi oil as a full-body moisturizer, often covering themselves in this oil before going sailing or diving. This will help their bodies retain moisture, even when exposed to salt water, wind and the harsh sun – an important health effect for those who want to keep their skin moist and nourished all day long! [8] 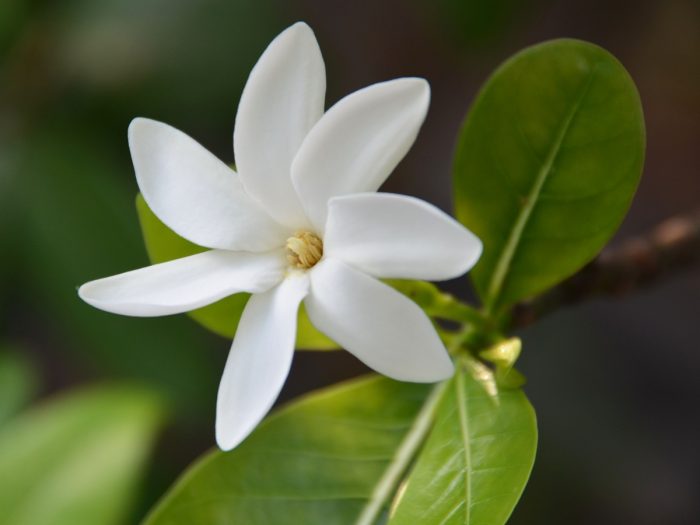 There are many different health conditions that can cause inflammation on the skin or scalp, but the methyl salicylate found in monoi oil can help eliminate many of those underlying factors. Thanks to its soothing and moisturizing nature, this oil can ease the pain of those conditions, while also protecting against further inflammation, including conditions like psoriasis, eczema and acne. [9]

Side Effects of Monoi Oil

There are very few side effects associated with monoi oil, but some people have reported skin inflammation and gastrointestinal issues when this oil is consumed. For internal consumption, coconut oil is a better choice than monoi oil, as it isn’t highly perfumed, and is also less expensive. Furthermore, if you are pregnant, you should also speak with a doctor before adding monoi oil to your regular health regimen.

For people with sensitive skin, this oil may cause inflammation or irritation, due to the powerful chemicals in the gardenia flowers, as well as the organic coconut oil. To avoid this, apply a small amount of this oil to a patch of skin and watch for any negative reactions before adding it to a larger area of skin or scalp.

On the rare occasion when this oil is consumed internally, it can cause stomach upset, as the concentrated nature of the methyl salicylate in the petals of the flowers may cause inflammation. Generally speaking, this oil should not be consumed.

There are a number of potent side effects of this oil that could potentially be passed along to a fetus, so its use during pregnancy is generally not recommended. However, use of coconut oil is not strictly forbidden during pregnancy; speak to your doctor if you are interested in using monoi oil during your pregnancy term.

Rate this article
Average rating 4.3 out of 5.0 based on 90 user(s).
Read This Next:
Popular Articles