There is a perennial herb genus called Ferula exudes sap from its taproot. This sap is the dried latex or resin that is called asafoetida. This plant is native to Iran and the Middle East, but it is found as far as India, where it is widely cultivated. Although the smell of the plant is quite pungent, when used in cooking and food preparation, the taste and aroma are not unlike a leek. Some of the common names for Ferula assa-foetida include asant, Devil’s dung, and ting. The dried variety of asafoetida can be crushed into a spice and added to many different foods, and is commonly found in Indian cuisine, in dressings, glazes, in sautés, and as a typical spice. Its pungent smell is usually lessened to a more manageable level when cooked in oil or ghee. It had been used for thousands of years in its native land and it started growing popular in Europe and neighboring regions after the 16th century. [1]

However, the real benefit of asafoetida is in the realm of herbal medicine, where it has dozens of common uses. It is composed of approximately 15% volatile oils, including ferulic acid, certain tannols, and a variety of other active components that contribute to the health benefits regularly recorded as a result of consumption. [2]

Let’s take a more in-depth look at the many impressive health benefits of asafoetida.

A 2013 study in the Journal of Pharmacognosy and Phytochemistry concludes that asafoetida shows the potential to act as an anticancer agent. This inference was reached after observing the high rate of cancer incidence in countries such China, Japan, Indonesia, etc. as compared to countries like Afghanistan, Iran, India, etc. where asafoetida is a fundamental ingredient. [3]

In 2015, an animal study noted that medium doses of this herb derivative might have a chemopreventive effect against colon carcinogenesis, thus providing further scope for development. [4]

Additionally, a 2017 review published in the Journal of Traditional and Complementary Medicine sheds lights on its anticarcinogenic, anticancer, and anticytotoxicity effects observed in animal studies. [5]

According to the observations of another animal study published in 2017, it was found to have antitumor and antimetastatic effects in case of breast cancer. However, further clinical studies are required to determine the anticancer potential of asafoetida on humans. [6] 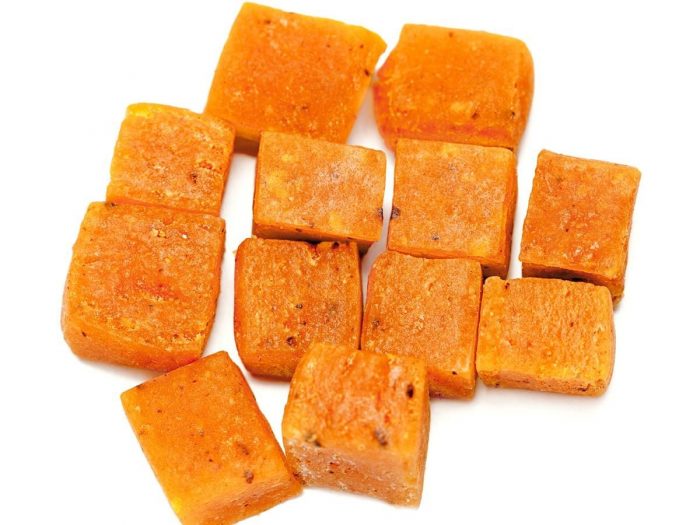 Asafoetida, or hing, is known as the world’s smelliest spice. Photo Credit: Shutterstock

Although the exact mechanism of pain relief is still a bit mysterious, asafoetida has been recommended as a safe analgesic for a wide range of pain levels and symptoms, from chronic pain from injuries or surgeries to the colic pain of toddlers. It is known to eliminate many of the primary conditions that cause pain, such as eliminating bloating and flatulence build-up in infants, thereby relieving their crying and pain. Whatever your pain symptoms happen to be, adding a bit of asafoetida to your diet certainly won’t hurt. [7]

Insect bites are annoying no matter what country you’re from, and that itching irritation can almost drive you mad. Fortunately, if you create a paste based of asafoetida, you can apply it directly to the spot of the bug bite to speed healing and reduce inflammation, which should also eliminate your desire to constantly scratch it! [8]

One of the ancient uses of asafoetida is its use as a sexual stimulant, and it is well-known to eliminate symptoms of impotence or infertility in men and women. By stimulating hormonal activity and boosting energy and blood flow, asafoetida is basically an aphrodisiac that is easily accessible and has no side-effects except a better sex life.

As mentioned earlier, asafoetida is often prescribed for those suffering from gas, intestinal worms, IBS, indigestion, and basically any disorder that is affecting your gastrointestinal system. This can include reducing cramping, bloating, constipation, diarrhea, ulcers, and excess flatulence, as well as food poisoning and more serious stomach issues, such as colorectal cancer. [9]

As an antiviral, antibiotic, anti-inflammatory, and expectorant substance, asafoetida is ideal for treating respiratory conditions. It can help to eliminate excess mucus and phlegm from the system, while also neutralizing and bacteria or pathogens that may be in the respiratory tracts, effectively boosting your immune system and letting you breathe easy, even if you suffer from conditions like asthma. [10]

In a similar anti-inflammatory capacity as explained earlier, asafoetida has long been relied on to soothe the pain of headaches. By improving blood flow in the capillaries and eliminating excess free radicals, asafoetida can eliminate the tension and pain of headaches and migraines quite effectively. [11]

It seems that the list of benefits from asafoetida never stops; you can also use this taproot resin to soothe the body and mind, making it an effective treatment for hysteria, mood swings, chronic anxiety, depression, and stress. This is a crucial health benefit of asafoetida, as all of these disorders can wreak havoc on your overall system if not properly regulated and controlled. [12]

Progesterone is one of the most important elements for female reproductive health, and asafoetida stimulates the production of this crucial hormone. This can help to increase the safety of expectant mothers by preventing premature births, excessive bleeding, and sterility, while also lessening the symptoms of menstruations for women in general. [13]

Another popular traditional use of asafoetida is in the treatment of toothaches and earaches. You can make a mouth rinse with asafoetida and water for toothaches and an ear drop mixture with coconut oil for earaches. Both of these benefits are due to the anti-inflammatory, analgesic, and antibacterial effects of this useful and versatile resin. [14]

A Final Word of Warning: Excessive consumption of asafoetida can cause nausea, vomiting, diarrhea, and urination discomfort. Furthermore, if used for extended periods by pre-menopausal women, it can cause irregularities in the menstrual cycle. As is always recommended, consult your medical professional or trained herbalist before adding such a powerful (but beneficial) substance to your diet.

Rate this article
Average rating 4.2 out of 5.0 based on 41 user(s).
Read This Next:
Popular Articles