It is an ancient cereal that was cultivated in the Andes for the last 7,000 years. The scientific name is Chenopodium quinoa, and it is a species of goosefoot. It generally grows to a height between 1m to 3m in length, producing grains every year that can grow in various colors such as white, yellow, pink, orange, red, brown, and black. The grains can be consumed whole as well as in the form of flour. It is primarily grown in South America, in the Andean region, including countries like Ecuador, Peru, Colombia, and Bolivia. [1] 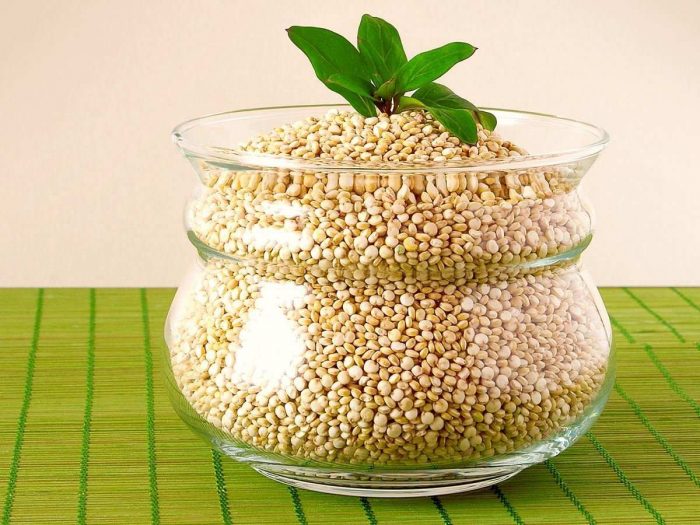 In the recent past, the Peruvian government has been giving incentives to farmers to increase the production of quinoa and other similar crops because of their outstanding nutritional qualities. [2]

It is rich in magnesium and phosphorous, as well as a significant amount of iron, zinc, copper, and potassium. It even has trace amounts of calcium, sodium, and selenium. It is a good source of thiamin, riboflavin, folate, vitamin B6, and other b complex vitamins. This makes quinoa the perfect food to help regulate the internal functions and the metabolism of the body. [4] [5]

It is also a rich source of phytonutrients and flavonoids like kaempferol and quercetin, as well as tryptophan, which has its own special health benefits that add to the demand for quinoa. [6]

Finally, there are a huge amount of protein components and vital amino acids found within it that the body needs for proper functioning. [7]

100 grams of cooked quinoa only contains 120 calories. For a grain-like substance, that is far less fat than most foods of that type. For people concerned about their weight, replacing other grain foods with this is a wonderful way to slim down. [8]

Quinoa is a high-carb food. According to the USDA National Nutrient Database, 100 g of uncooked quinoa contains approximately 64 g of carbs and 100 g of cooked form contains about 22 g of carbs. [9] [10]

A study found that a high intake of wheat, oat, spaghetti, rice, and oat spaghetti induced more eating. On the other hand, alternatives, such as quinoa and amaranthus, did not induce more eating. This is particularly important for those who want to control their diet and who want to lose weight. Consuming it will reduce the excess intake of food, thereby promoting a healthier weight. [11] [12]

Quinoa is also gluten-free and therefore can be consumed by people who have a gluten intolerance. It can be used in bread, pasta, and other food items that usually contain gluten. It can also be used in place of other gluten-free food items like tapioca, potato, corn because of its high nutrition value. [13]

Quinoa contains high-quality proteins and carbohydrates with low-glycemic value, along with omega-3 and omega-6 fatty acids, as well as antioxidants. It is also considered good for reducing the risk of cardiovascular diseases in the future and improving overall heart health. Trials on young and middle-aged people confirmed a decreased risk of cardiovascular diseases. [14]

Quinoa contains insoluble fiber, which helps to improve the digestive process and facilitates healthier bowel movements. This further helps in reducing the risk of flatulence, bloating, pain, constipation, and gas. [15]

The amount of calcium found in quinoa is similar to that of dairy products, but it has been pointed out that those who are intolerant of dairy products can eat it. Calcium is very important for the bones, brain, and nervous system. [16]

Quinoa seeds can be beneficial in regulating diabetes and blood cholesterol levels. A study on high fructose-fed rats indicated that the consumption of its seeds can help in reducing the adverse effects of fructose on both the glucose level and lipid profile. [17]

Magnesium is one of the trace elements found in quinoa. The dietary intake of magnesium provides benefits, including the control of asthma, increased bone health, reduced risk of osteoporosis, an increase in heart health, and the regulation of blood sugar levels. [19]

Rate this article
Average rating 3.8 out of 5.0 based on 86 user(s).
Read This Next:
Popular Articles