Some of the health benefits of orach include its ability to regulate digestion, improve kidney health, boost cardiovascular strength, strengthen the immune system, detoxifies the blood, and may reduce the risk of certain cancers and chronic diseases.

Orach is the common name (also known as saltbush or orache) for members of the Atriplex genus, which has more than 250 different species of plants that have some very unique qualities. Perhaps the most unusual aspect is its ability to store salt in the leaves, which makes it possible for orach to grow in highly saline environments, where most plants would be unable to grow. It is primarily found in Australia, North America, South America, and Eurasia in subtropical to temperate climates. It is a very hardy plant and has a wealth of nutrients.

Although the taste of some varieties is very tangy, similar to chard, other varieties are more palatable and can be used in a similar function as spinach or other green, leafy vegetables. For human consumption, most people turn to Atriplex hortensis, which has an acidic taste, but can be cooked or included in various dishes in the same manner as spinach. It was popular in the Mediterranean region in ancient times, but was largely replaced by spinach. However, it has had a resurgence of popularity due to some of its unique mineral, vitamin, and organic compounds that are beneficial for human health. [1] 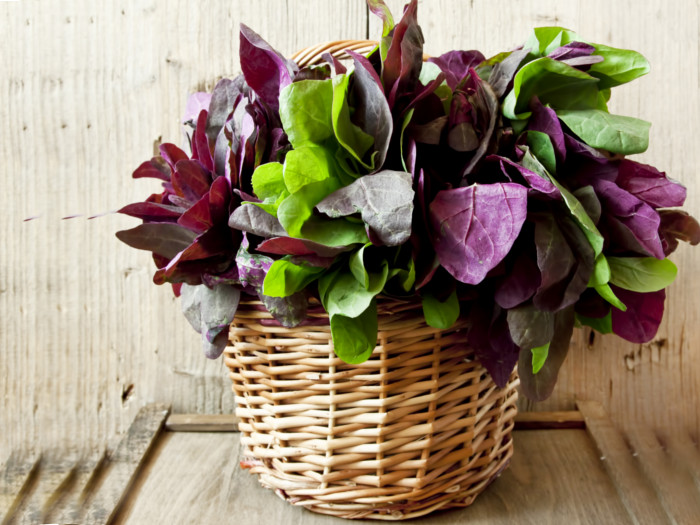 Orach can also be found under the common names of French spinach. Photo Credit: Shutterstock

Health benefits of orach include the following:

Like many green leafy vegetables, orach is good for stimulating digestion due to the levels of dietary fiber and other minerals that optimize digestive processes. This means that you can reduce your chances of constipation, as well as more serious gastrointestinal issues like gastric ulcers. [3]

Orach has been found to have a slight laxative and diuretic effect, which means that it stimulates urination. This helps to purify the kidneys and quickly eliminate toxins, excess salts, water, and even fat from your body. By causing frequent urination, you can ensure that your kidneys are functioning at a high level and also, your gallbladder health is improved by the consumption of orach. [4]

According to a research published in the Acta Physiologiae Plantarum Journal, orach does possess certain antioxidant compounds that may reduce the risk of cancer from developing and can also neutralize free radicals that cause oxidative stress in the body’s organs and cells. For example, the high levels of anthocyanins and carotenes in orach help to reduce signs of premature aging, boost the health of your eyes, improve cardiovascular health, and even prevent certain mutations in cells that can lead to cancer. [5]

The proteins, minerals, and vitamins stored in orach can help everything from hormonal regulation to enzymatic reactions that are required to keep the body functioning. Also, the high levels of iron and calcium boost red blood cell creation, circulation, and oxygenation of the tissues and organ systems, increasing overall metabolic efficiency and keeping your body regulated and healthy. [6]

Orach possesses almost twice the amount of vitamin C as kiwis or lemons, which are often considered the top foods for acquiring vitamin C quickly. This high content of ascorbic acid means that your immune system gets a huge boost, white blood cell production is stimulated, and your bodily functions like cellular regeneration and wound healing are sped up. Also, jaundice can be quickly alleviated by adding orach to your diet. [7]

A Word of Caution: Similar to spinach, orach contains significant levels of oxalic acid (although less than spinach). This means that if you suffer from kidney stones, gall stones, or gout, it might be a good idea to avoid orach and find these nutritional elements elsewhere. [8]

Rate this article
Average rating 3.9 out of 5.0 based on 20 user(s).
Read This Next:
Popular Articles