Is Himalayan Salt a Healthier Option

Himalayan salt is a special variety of rock salt found in the Himalayan region that boasts a unique hue due to its mineral composition and is used both as a culinary ingredient and a commercial product.

What Is Pink Himalayan Salt?

Pink Himalayan salt is a pink-colored rock salt typically mined from the Punjab region in Pakistan. This coarse salt has a unique color because it is not pure sodium chloride (NaCl), like iodized table salt. Instead, Himalayan salt consists of 94-98% sodium chloride, according to an article published in the Bulletin of the Geological Society of Greece, along with dozens of other mineral impurities in small quantities, including calcium, potassium, magnesium, sulfate, bicarbonate and many others. These impurities are the reason for the soft pink tone of this rock salt, rather than the pure white of table salt or the cloudy white of sea salt. [1] [2]

This pink salt is commonly used as a replacement for traditional table salt, as it does have a slightly different flavor and a number of claims about its potential health benefits. While this rock salt is known to have low exposure to pollution, a minimum amount of processing, and a laundry list of trace mineral elements, there is no scientific evidence that definitively supports the beneficial health claims linked to this specialty spice, which will be briefly outlined below. 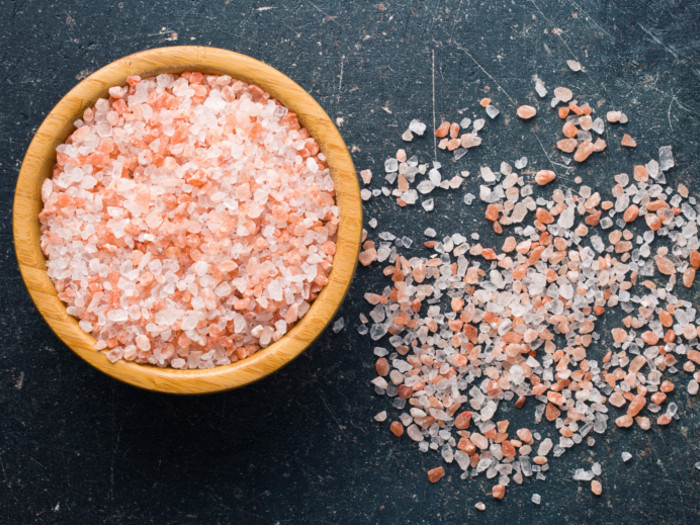 There are many claims surrounding the potential health benefits of Himalayan rock salt, including its ability to strengthen bones, regulate fluid levels in the body, improve circulation and balance pH in the body, but there is a dearth of scientific evidence to back up many of these claims.

While increasing your mineral intake is important, remember that mineral impurities make up only 2-6% of most Himalayan salt, and based on the small amount that is typically added to a meal for consumption, your potential intake of these trace minerals in any significant quantity is limited. In other words, their bioavailability is limited, as shown in a study published in the Journal of Trace Elements in Medicine and Biology. [3]

The belief that pink Himalayan rock salt is better for your health because it contains less NaCl is also difficult to prove, as many varieties will be 98% identical to traditional table salt. Furthermore, most of the salt that we take in is already present in the food, not from table salt (or Himalayan salt) that is added during preparation. That being said, sodium is critical for electrolyte balance, so ensuring that you have enough in your body is important.

In terms of flavor, some people prefer the taste of Himalayan salt, and for people who may be suffering from certain mineral deficiencies, boosting trace mineral intake even a small amount can aid in certain areas, such as hormone balance, thyroid function, and metabolic activities. [4]

Finally, Himalayan salt is better than traditional salt because it is less likely to contain toxins or dangerous impurities. This salt is considered a “natural” form of salt as it is hand-mined and does not undergo any processing, nor is it exposed to anti-caking agents or other chemicals that table salt may be treated with. Though there is no proven danger to the processing of table salt, those who prefer to live a purely organic lifestyle may be drawn to this rock salt variety.

Claims of health benefits linked to other Himalayan rock salt products—lamps, cutting boards, bath salts, etc., similarly lack any peer-reviewed evidence; these products should be appreciated for their aesthetic or sensory value, but not their health effects.

Although adding trace minerals to your diet is generally considered a good thing, it’s important to remember that most table salt is iodized. This means that it provides adequate levels of additional iodine for our diet, as US regulations require iodized salt to have a concentration of 45 mg I/kg, according to an article published in Environmental Science and Technology. For people who are struggling with their thyroid or have an iodine deficiency, it may actually be better to stick with iodized table salt than pink Himalayan salt, which may contain iodine, but in a lower concentration. [5]

Furthermore, salt intake should be closely regulated, as high levels of salt can increase your risk of high blood pressure, kidney disease, heart disease, stroke, osteoporosis, and liver damage, among many other common conditions. Despite the unverified claims of health benefits linked to Himalayan rock salt, moderation of any salt variety is key. Finally, only use Himalayan salt from verified or trusted sources. Some products are falsely marketed as authentic pink Himalayan rock salt but may include higher levels of heavy metals, such as lead, or maybe artificially colored in some way. [6]