The home remedies for Addison’s disease include the use of ginger, licorice, ginseng, green tea, turmeric, borage, reishi mushrooms, milk thistle extract, astragalus, and echinacea, as well as certain lifestyle changes and behaviors such as tai chi, meditation, and yoga.

Addison’s disease is a rare hormonal disease where the adrenal glands are not able to create essential adrenal hormones like cortisol and aldosterone. The condition is usually autoimmune in nature and is also called chronic adrenal deficiency, hypocortisolism, or hypoadrenalism. [1] [2]

There are effective pharmaceutical options, as well as supplements to boost your cortisol and adrenaline levels to their proper levels, thereby making the disease more tolerable. Fortunately, there are also herbal and natural remedies you can perform at home that can help if you are suffering from Addison’s disease. However, the disease should not be taken lightly, and consultation with a doctor before beginning any herbal or natural treatments is highly recommended. Now, let’s look at some of the home remedies for Addison’s disease that many people turn to when suffering from this condition. 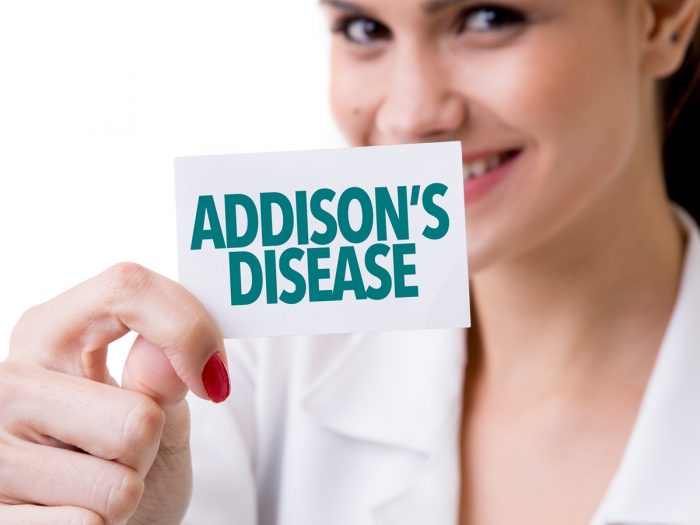 Here are the best natural remedies for Addison’s disease including:

Ginger is a useful herb to treat both the symptoms and the condition itself. It soothes the intestinal issues and discomfort that so often accompany Addison’s disease. It stimulates bowel movements and also stops nausea. Ginger can be consumed in food as well as in the form of ginger tea. [3]

As mentioned, there are certain lifestyle changes you can make to better arm yourself against the problem of Addison’s disease. Although some forms of medicine still object to the validity of acupuncture, yoga, tai chi, and meditation as legitimate forms of treatment, Addison’s disease is related to hormone production, and there have been numerous scientific studies linking these techniques to better mental health and stability, including the regulation of hormones. The personality effects that can come as a part of Addison’s disease can also be alleviated or lessened by things like meditation and yoga. [4]

These two herbal elements have been suggested in a number of alternative studies for the treatment of Addison’s disease. Since they are closely related to supporting a healthy immune system, they can prevent the autoimmune attacks on the adrenal cortex that causes Addison’s disease in the first place. [5]

This powerful type of tea is used for many different herbal treatments, but it is known to regulate hormones and keep the body’s metabolism functioning properly. Furthermore, it helps to boost the immune system of the body, protecting it against autoimmune attacks.

A balanced diet and keeping up your exercise routine will boost your defenses against autoimmune diseases, and can also keep your hormones in proper balance so even if you are suffering from Addison’s disease, the effects shouldn’t be as severe. Diet and exercise should always be used as a complement to both traditional and medical treatments. [6]

In the alternative healing of Addison’s disease, both of these foods have been known to help boost the strength of the immune system and increase hormone production, which counteracts the detrimental drop in hormone production that occurs as the adrenal cortex is attacked or weakened by autoimmune cells or other diseases that can cause Addison’s.

These three herbal supplements can be taken in order to boost the body against the effects of Addison’s disease. Through a combination of hormonal boosting and immune system strength, these supplements can seriously help complement whatever treatment plan you are following for Addison’s Disease.

Word of Caution: As mentioned above, there is no cure for Addison’s disease, meaning that it is very important to seek medical attention and get into a routine of treatment to maintain some normalcy in your life. Research is ongoing about more permanent solutions, but they are as yet unsuccessful. If the condition turns to Addisonian crisis, the body suffers from extremely low blood pressure and falls into a coma. That is why treatment of this rare disease must be taken very seriously, and herbal or natural remedies should only be seen as a supplementary or complementary solution. Stay healthy! [7]