What is Horse Chestnut

Despite its name, horse chestnut trees are not closely related to chestnuts, but many different parts of this tree have the impressive potential for health and are widely used in certain parts of the world.

What is Horse Chestnut?

A horse chestnut tree is a large, deciduous tree bearing the scientific name Aesculus hippocastanum, which may also be known as a conker tree in some regions, as per a research published in NIH. Due to the great beauty and grandeur of the trees, as well as the large, vibrant flowers, they have always been quite popular, in addition to its potential health effects. [1]

While the leaves and bark of this tree are used for various medicinal purposes, the primary element used in herbal medicine is the horse chestnut seed, which is found in the fruit of this plant. The fruit consists of a spiky, green capsule, and inside there is usually one nut-like seed. This is why people initially likened this tree to a regular chestnut tree. These seeds are called horse chestnuts or conkers; it is possible to create an extract from these, a process which will be explained further below.

This fruit-bearing tree is native to the Balkan region and has long been sought out for traditional medicine in European cultures. Now, these trees are found more broadly across Europe, as well as in North America. The trees may grow over 100 feet tall and bear white flowers, as well as spiky green capsules—the fruit of the tree, as mentioned above.

The horse chestnut seeds contain a wide variety of volatile compounds, including a very potent chemical called aescin, which is the primary active ingredient in the extract, as per a study published in the journal Pharmacological Research [2]. Aescin is a triterpenoid saponin, and some of its effects include thinning the blood and encouraging the release of fluid from the body, rather than storage as water weight, or as edema. It has also displayed enzyme-inhibiting activity and can prevent the activation of leukocytes, according to Max H. Pittler M.D., who published his findings in the Journal of the American Medical Association. [3]

The concentration of chemicals in a horse chestnut alters as the fruit ripens, so it is always important to make extracts out of mature seeds. In earlier stages of development, horse chestnuts contain esculin, which is a toxin and can be very dangerous, even lethal, if consumed raw. This esculin is eliminated when the seed extract is being processed, and can also be found in smaller quantities in the bark and leaves. [4] 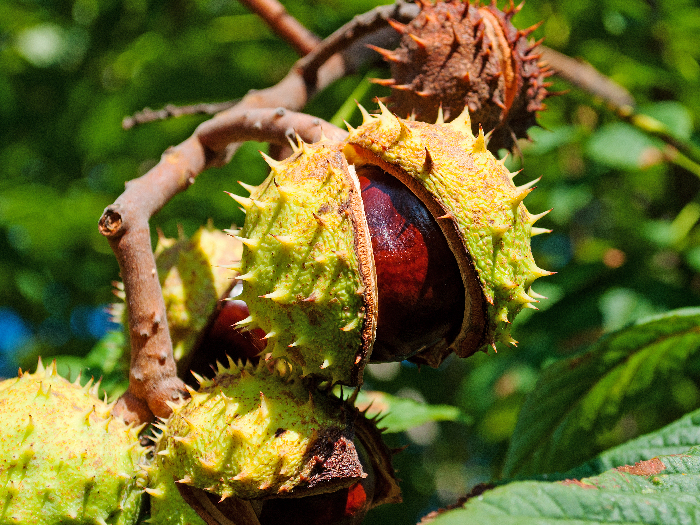 Though there has been a dearth of formal research organized around horse chestnut seed extracts, some studies do exist and there is a broad range of anecdotal evidence for the application and efficacy of this herbal treatment. Some of the top potential health benefits of using this extract include reducing inflammation, lowering cancer risk, boosting fertility levels in men, and treating varicose veins, among others.

By thinning the blood, it has been found that horse chestnut seed extract can help to reduce the bulging appearance of varicose veins by improving circulation and blood flow. The topical application of extract cream and the ingestion of capsules have both been found effective in treating this common condition, according to research published in the Alternative Medicine Review by Douglas MacKay. [5]

This condition can result in discomfort in the legs, varicose veins, and edema, and is caused by poor blood flow within the legs. Due to aescin’s effects on blood flow, short-term use of horse chestnut seed extract has been found to successfully alleviate these symptoms, sometimes as effectively as compression therapy and other accepted remedies, as per a study published in the Journal of Herbal Pharmacotherapy. [6]

The anti-inflammatory nature of horse chestnut seed extract, as well as remedies made from the leaves and bark of this tree, make it a popular home remedy for everything from swollen joints, hemorrhoids, and sports injuries to eczema, arthritis, and menstrual pain. [7]

Studies have shown that the extract also has antioxidant compounds, including kaempferol and quercetin, both of which are known to reduce oxidative stress and inflammation. Free radicals within the body are responsible for the cellular damage that leads to cancer, and this extract may help neutralize them. [8]

Some men struggle to remain fertile due to inflammation or swelling near the testicles, but studies have found that the anti-inflammatory and pro-circulatory effects of this extract, particularly the aescin, can reduce that inflammation and improve normal fertility levels in men. A study published in Phytomedicine found a clear and significant link between the use of this extract and improved sperm motility and health in a large study group of Chinese men struggling with inflammation-related infertility. [9]

When using this extract, always seek out a regulated and processed form from a manufacturer, not a raw form, as the seed, leaves, and bark are toxic if used improperly. The typical standardized dose of this extract is 50 milligrams, up to 2-3 times per day. Numerous studies have found that the use of horse chestnut seed extract is effective for various health conditions when used properly. Before adding any potent herbal remedy to your daily regiment, it is best to speak with a medical professional or a trained herbalist. [10]

Although there are many beneficial effects to using this extract, as outlined above, there are also some potential risks that you may want to avoid.

An upset stomach and a headache may also be present, especially if you are taking an excessive amount of this extract. A worrying, but ultimately harmless side effect includes your urine temporarily turning red!