How to Freeze Zucchini

If you don’t know how to freeze zucchini, you might end up wasting a surplus harvest and be missing this ingredient in your winter recipes.

How to Freeze Zucchini?

Before you can put zucchini in the freezer, you need to prepare it for the freezing process. First, blanch your zucchini. Begin by washing the zucchini thoroughly and then drying the outer skin to remove any dirt, grit or excess toxins, such as herbicides or pesticides. Then, slice or cube the zucchini as you might for a recipe.

Bring a large pot of water to boil and then dump the sliced zucchinis into the water. However, only leave them in the boiling water for about 60 seconds. Immediately remove them and place them in a bowl of cold water. This process is called blanching and will prevent the zucchini from becoming mushy and limp after you defrost them. The consistency will be slightly softer, but there should still be some crunch that remains. That being said, it is important to minimize the time between removing the zucchini from the cold water and putting them in the freezer. [1] 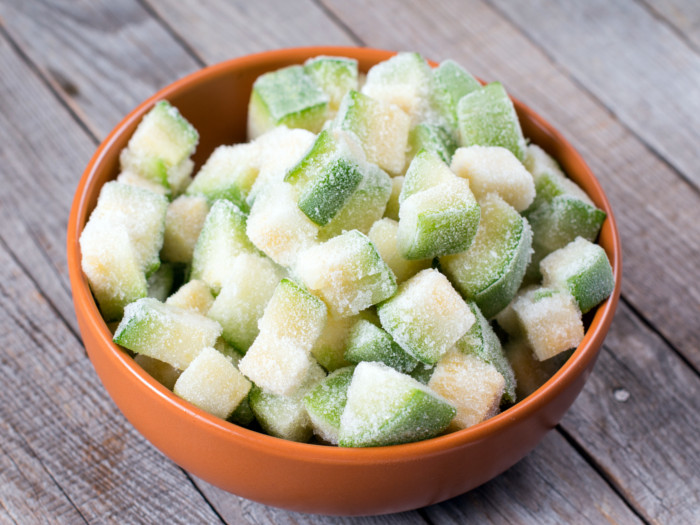 Zucchini can be added to pasta, salads, sandwiches and more. Photo Credit: Shutterstock

After pulling the zucchini from the cold water lay them out on a towel or dry them in a salad spinner. Next, keep the blanched zucchini pieces on a cookie sheet lined with wax paper and place them in the freezer. Allow the zucchini about 1-2 hours to thoroughly freeze before re-packaging them in a freezer bag.

When you are ready to use your frozen zucchini, simply scoop out what you need from the freezer bag; since you froze them first on a cookie sheet, they shouldn’t clump together. Unlike other frozen vegetables, however, you don’t need to steam or boil them before using in a recipe. Simply throw them into stir-fries and other vegetable preparations. According to a report in Elsevier’s Journal of Food Composition and Analysis, frozen produce may be more nutritious than its 5-day fresh-stored counterpart because fresh vegetables tend to lose their nutritional content over time during refrigerated storage. [2]