Jamun is a lesser-known tropical fruit, however, due to its high nutrient content, it is one that more people should be seeking out to boost their overall health.

Jamun is an evergreen fruiting tree with the scientific name Syzygium cumini. More commonly known as black plum, it may also be called jambul, java plum or jamblang, depending on where you are in the world. This tree is native to the Indian subcontinent but has spread to other Asian nations and islands, in addition to being naturalized in the United States and some parts of South America. This tree is primarily cultivated for its fruit, which bears the same name and looks similar to a small plum or a large berry. The color changes from light green to pink to dark purple when it is fully mature.

The jamun fruit has a sweet and sour flavor and is known to be quite astringent, although this taste can vary depending on when you pick the fruit. While it has been a part of cultural, religious, and culinary traditions in different parts of the world for centuries, it is only recently gaining popularity in the rest of the world.

Black plums contain a significant amount of vitamin C, iron, magnesium, B-family vitamins, and dietary fiber, as well as potassium, vitamin A and small amounts of protein. They contain a moderate amount of calories, roughly 75 per cup, but there is a minimal amount of fat and no cholesterol to speak of. 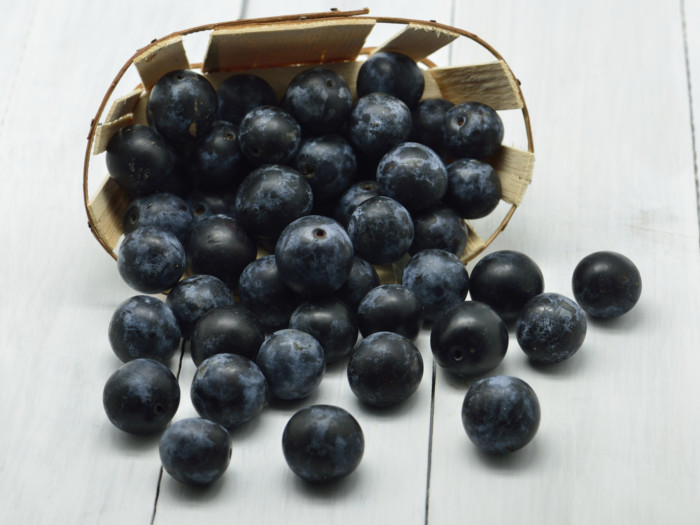 Jamun is a black plum that aids in skin care and weight loss, relieves stomach pain, and boosts immunity. It can be used in salads, desserts, juices, and smoothies.

The Journal of Food Chemistry [2]suggests that antioxidant-rich foods help treat many skin diseases. With plenty of vitamin A, vitamin E, and other antioxidants, jamun may help improve the appearance of the skin by reducing oxidative stress and lowering inflammation levels.

Regular consumption of jamun fruit or juice contains notable levels of potassium, which is a vasodilator, which may help reduce your risk of high blood pressure, atherosclerosis, and heart attacks. [3]

There is a good amount of vitamin C and other antioxidants in this fruit, which can help to stimulate the production of white blood cells, and in turn, increase the strength of the immune system. Also, according to the Journal Food Research International [4], black plums have antibacterial, antifungal, and anti-viral properties that help keep you protected from many diseases.

The antioxidant enzymes in jamun extracts are critical for the production of hemoglobin, which the body needs to maintain healthy circulation and the delivery of oxygen and nutrients. [5]

Being low in calories, jamun is a cherished addition to many weight loss diets. Plus it is also a source of dietary fiber so it helps to optimize digestion and keep you full as well!

Black plum has been known to have abundant antioxidants that inhibit the free radical activity in the body. This is noted by a study conducted in 2005. More recent research published in 2011 has also found that the beneficial health properties of black plums also include anticancer and chemopreventive properties. So, it is not only good at staving off cancer but may also as an aid when it comes to treating cancer! [6] [7]

Jamun has long been used as a treatment for diabetes in Ayurvedic medicine. Research conducted in 2013 shows promise regarding the anti-diabetic effects of this fruit. The kernel of the fruit has the most potential as it helps lower blood glucose levels, as per a study published in the Journal of Food Science and Technology in 2017. [8] [9] [10]

Medicinally, jamun is found in a number of forms, including as a juice, in its raw fruit form, and in the form of an extract (from the bark, leaves, and seeds). The leaves are also used in salads and as a poultice. The juice and raw fruits are used in a number of culinary applications, namely desserts, and in fruit juices and smoothies.

Side Effects of Jamun

The main side effects of jamun include potentially negative effects for people who have blood clots, hypoglycemia, respiratory problems, or fever. This fruit is known to lower blood sugar – which can be dangerous for people taking diabetes medicines and it is a clotting agent, so it can be detrimental for people with atherosclerosis or a history of blood clots. It can also cause coughing, fever, body aches, and congestion when consumed in large quantities. [11]

So, make sure to eat black plums in moderation and see a doctor if you feel any negative effects after eating.

Rate this article
Average rating 3.7 out of 5.0 based on 670 user(s).
Read This Next:
Popular Articles