Preparing salads and other dishes with kale seems to be a new health trend but this leafy green vegetable has been a popular food staple for centuries in various nations of the world. While not as widely loved as basic lettuce or spinach, it is an incredible source of nutrients and a worthy addition to any diet.

Kale is a leafy green cultivar of the Brassica oleracea species, which also includes broccoli, cauliflower, savoy, kohlrabi, Brussels sprouts, cabbage, and collard greens. While many people think of these vegetables as different species, with different flavors and culinary applications, they are actually all the same species, broken down into seven major cultivar groups. Based on these classification groups, kale is most closely related to collard greens. It boasts either green or purple leaves that tend to be wrinkled or curly, and quite dense and stiff, unlike other Brassica oleracea cultivars that form a tight head in the center of the plant, surrounded by thinner, flimsier leaves.

Kale has been a part of the culinary tradition dating back to the ancient Greeks. Due to the hardiness of this plant, and its ability to grow in rather inhospitable conditions, it has been a staple food for numerous cultures. It is often one of the last vegetables to be harvested before harsh, hungry winters. It can grow in tight, compact plants like cabbage, or can grow to more than 6 feet tall with broad, long leaves. There are five main groups within kale, denoted by the size and shape of the leaves: plain leaf, rape kale, leaf and spear, curly leaf, and bumpy leaf.

The variation within kale cultivars is impressive, but most possess similar nutritional benefits and can be trusted to deliver similar health effects when added to your diet. 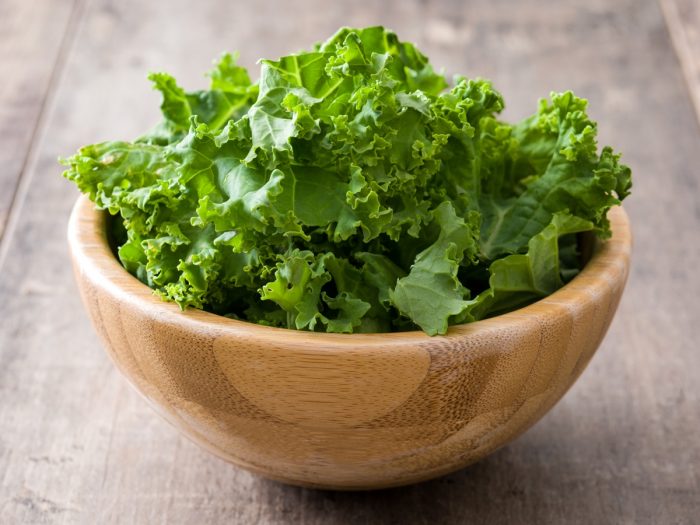 When you add kale to your diet, you will be benefiting from a huge amount of vitamin K (more than 1100% of the daily recommendation), as well as significant amounts of vitamin A, vitamin C, copper, and manganese. Additionally, there are decent levels of potassium, calcium, iron, dietary fiber, vitamin B6, omega-3 fatty acids, magnesium, thiamin, niacin, folate, and phosphorus. There are also some powerful antioxidants found in kale, namely lutein and zeaxanthin, as well as kaempferol and quercetin.

Finally, a single cup of this vegetable only has 36 calories but provides a notable amount of protein. Overall, the nutritional density of kale is extremely beneficial for a healthy diet.

With a rich supply of iron, vitamin C, and vitamin A, this vegetable is excellent for strengthening the hair and stimulating its growth. Nutrients like vitamin A are needed for the production of hair, and vitamin C is a key part of collagen, which is also crucial in the structure of hair. Furthermore, proper iron levels are required to defend against unwanted hair loss.

Lutein and zeaxanthin, along with various other flavonoids, are found in kale, and these antioxidants have been proven to be important for skin health. Carotenoids can neutralize free radicals in the body and lower levels of oxidative stress, including on the skin. This will help reduce the appearance of wrinkles and age spots, as well as blemishes and scars, and even increase the elasticity of your skin to help you look younger.

With less than 40 calories in a single cup of this leafy green vegetable, you can get a strong boost of nutrients and antioxidants without compromising your caloric goals. If you are struggling with weight loss, kale can boost your metabolism and speed the process of passive fat-burning, helping you lose even more weight!

The anti-inflammatory nature of kale comes from its high levels of vitamin K, as well as omega-3 fatty acids. The former is a key nutrient in regulating the body’s inflammatory response, while the latter is able to lower levels of chronic inflammation in the cardiovascular system and gut.

There is a notable amount of potassium found in kale (8% of your daily recommendation in a single cup), which makes this vegetable excellent for lowering blood pressure. As a vasodilator, potassium may lower the tension in blood vessels and arteries, which reduces blood pressure and reduces your risk of heart attack and stroke.

If you are constipated, adding leafy green vegetables like kale to your diet is extremely important. It is high in dietary fiber (with 10% of your daily requirement in every cup), which is good for bulking up the stool and stimulating peristaltic motion in the gut, thus reducing signs of constipation, bloating, cramping, and diarrhea.

Research has shown that having a deficiency in vitamin K makes you more susceptible to osteoporosis and bone breakage. With more than the daily recommended amount of vitamin K, in addition to a range of other minerals critical for bone health, kale is a great choice for boosting bone mineral density.

This popular vegetable has a good amount of omega-3 fatty acids, such as alpha-linolenic acid, which has been shown to lower the level of “bad” cholesterol (LDL) and increase the level of “good” cholesterol (HDL). This can prevent plaque deposition in the arteries and lower your risk for coronary heart disease.

The American Institute of Cancer Research lists kale as one of the foods that fight cancer, especially owing to fiber, folate, and carotenoid content. The National Cancer Institute also suggests that cruciferous vegetables like kale could be helpful against carcinogens as well as to induce apoptosis. They have been found to have a significant effect with regards to prostate, colorectal, breast, and lung cancer.

A 2016 study published in the Current Pharmacology Reports notes that vegetables in this family are packed in chemical components which lend it anti-proliferative and anti-tumorigenic properties.

While further studies are required to fully understand the role of kale against cancer, several studies already hint at including cruciferous vegetables in the diet for their observed anticancer potential.

The presence of carotenoids in kale makes it an ideal booster for vision. Lutein and zeaxanthin have been linked to lower levels of macular degeneration and the slowed progression of cataracts.

One of the antioxidants found in kale, alpha-lipoic acid, has been linked to lower levels of blood sugar and improved insulin sensitivity by the body. This can help prevent dangerous spikes and drops in glucose and insulin levels, making diabetes management easier for people living with the condition. Kale can also add to your fiber intake, thus help your blood sugar levels, while keeping you full.

How to Use Kale

There are many ways to prepare kale, but some of the most popular methods are preparing salads, chips, sauteed kale, kale juice, and pizza.

Despite the many health benefits of kale, as outlined above, this leafy green vegetable also comes with some potential side effects, such as thallium toxicity, gastrointestinal problems, hyperkalemia and problems with blood clotting.