Although most people associate ketamine as being a dangerous party drug, it has recently garnered attention for its possible effects on severe depression.

Ketamine is most commonly known in the medical profession as an anesthetic, and it was used in the past for battlefield triage and more recently as a less addictive form of pain relief following burns or other extended recovery injuries. As mentioned above, it has certain hallucinogenic and sedative qualities, which has made it a popular recreational drug in the past few decades.

However, recent off-label use of ketamine as an alternative to SSRIs and other pharmaceutical solutions for depression has brought it back into the mainstream discussion. While there is an additional risk in the use of this drug, given some of its more intense side effects, when taken in large quantities, carefully controlled usage of this drug does show some promising results for those suffering from chronic depression, as published in The American Journal of Psychology. [1] 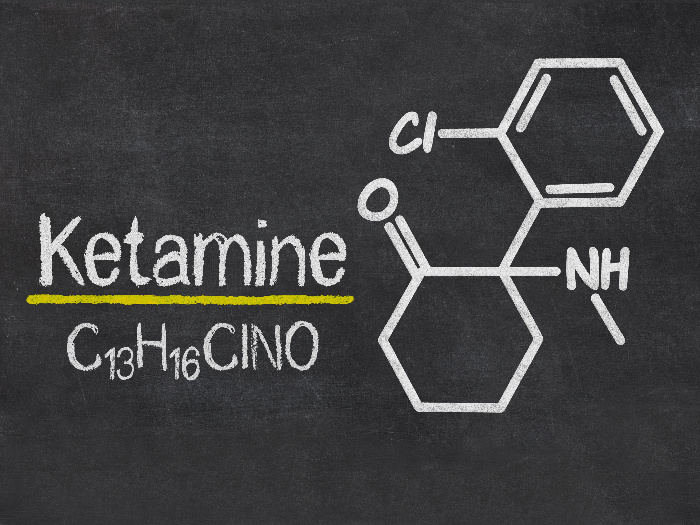 Benefits of Ketamine for Depression

When ketamine is administered to the body, it is able to help repair parts of the brain that have been damaged by long-term exposure to stress hormones. Furthermore, the effects are fast-acting, in comparison to more traditional SSRI prescriptions, according to an article published in the journal Frontiers in Pharmacology. What may take weeks or months to ‘balance out’ in your system with other pharmaceuticals, ketamine can do in a matter of days. It has only been approved by the FDA for limited use as a depression treatment, but its ability to rapidly reduce signs of depression in many users is difficult to deny. [2]

There is an FDA-approved nasal spray coming to the market called Spravato, with the active ingredient being esketamine. This is a slightly altered form of ketamine and one that has been used as an anesthetic for years. Like all ketamine medications, it works on affecting glutamate levels in the brain, which is found in high concentrations, as opposed to serotonin-affecting drugs typically prescribed for depression. The nasal spray is fast-acting and is a viable alternative to more intense treatments for severe depression patients who are not responding to any other medication. [3]

Ketamine treatment is still being seen with some skepticism, given the addictive quality of the drug, the history of its abuse, and its limited levels of approval from the FDA. However, there has been evidence that ketamine treatment can be effective in various forms. Treatment of severe depression with this drug usually involves an IV drip treatment of decreasing intensity, from 2-3 times per week, down to once per week, staggering eventually to an as-needed basis per month. [4]

Treatments can be expensive, however, and concern must be taken when dealing with those practitioners. Only seek out this treatment from trained and trusted medical professionals after you have undergone a thorough psychological examination for severe depression.

There have been limited studies on the appropriate dosage or the long-term effects of this drug, but current off-label recommendations for its use in depression suggest 0.5 mg/kg IV up to two times weekly, not to exceed a total duration of six weeks. There have been no studies on long term administration of the drug, as the FDA has only recently approved a nasal spray for the very first time. [5]

Be sure to speak with your doctor and pharmacist if you have been prescribed ketamine for any reason, and ensure that you understand the dosage advice to avoid any adverse effects.

As with any drug, overuse of this drug can have dangerous side effects, but ketamine stands apart. Due to its addictive nature and somewhat hallucinogenic side effects, taking too much can create a real problem, even to the point of exacerbating symptoms of depression, rather than relieving them.

There are a number of side effects that have been reported. These include:

If you are experiencing such side effects, discontinue this treatment and bring up the issue with your doctor.

As this is still a relatively new approach to depression treatment, many questions still need to be answered with ongoing, longer-term research. That being said, the symptoms of weaning off ketamine also appear to be less intense than the psychological turmoil that can follow the abrupt cessation of SSRI use. [6]