Taking l-theanine supplements is necessary for some people with particular health conditions, but before you add it to your regimen, it is best to understand all of its possible effects.

L-theanine is an amino acid analog to glutamate and glutamine but was unknown until its discovery in the middle of the twentieth century. Found primarily in plant and fungal sources, it is perhaps most famous for its presence in Camellia sinensis, the tea plant. There is some controversy about supplementation with this amino acid, and while it is perfectly legal and widely available in the United States, it is prohibited in Europe and other parts of the world. [1]

Generally speaking, when consumed in moderation, l-theanine is perfectly safe, and after being metabolized in the body, it will help to drive the production of neurotransmitters, such as dopamine and serotonin, as well as glycine and GABA (gamma-aminobutyric acid). If you want to increase your levels of l-theanine, the only available source is through drinking tea; this amino acid analog is what gives the savory (or umami) flavor to certain tea flavors. When it comes to dosage, a typical cup of black tea has about 20 milligrams of this compound, while average supplementation amounts range from 100-200 milligrams consumed twice per day. This compound is not made within the body, although it can be produced synthetically. [2] 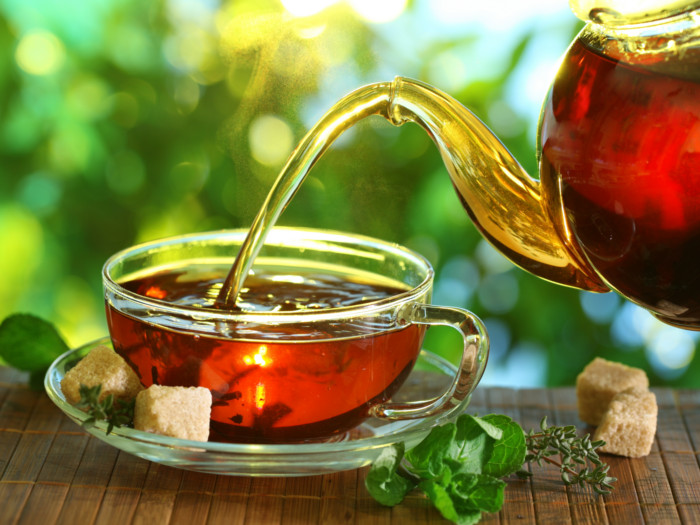 Black tea is generally stronger in flavour than other teas. Photo Credit: Shutterstock

The most impressive l-theanine benefits include its ability to boost cognitive function, lower anxiety, promote healthy sleep, and minimize the symptoms of schizophrenia, among others.

By stimulating the production of key neurotransmitters in the brain, such as dopamine and serotonin, this analog is able to reduce the oxidative stress in the brain and clear up neural pathways, resulting in less amyloid plaque deposition and ensuring that cognitive function is maintained as you age.  It is also known to improve alertness and memory retention. [3]

Having an influx of this amino acid analog allows the body to rapidly reduce blood pressure and keep cardiovascular events under control, thus protecting against coronary heart disease and additional strokes. [4]

Research has shown that those who are regularly supplementing their diet with l-theanine are able to lower their overall stress hormone levels, which reduces the risk of chronic disease and inflammation throughout the body. When consuming this compound in tea, the other antioxidants can further help to relax your mind. [5]

Although this compound is linked to boosting alertness and concentration, it also has sedative properties, thanks to its effects on serotonin and dopamine levels in the body. By balancing the hormones in your brain, l-theanine can make it easier for you to drift off peacefully to sleep, and wake up feeling refreshed in the morning. [6]

The studies in this regard have been somewhat limited, but when administered to young adults with hyperactivity disorders, this amino acid analog was able to reduce distracted thinking and increase their ability to concentrate, resulting in better behavior and academic outcomes. [7]

Nervous system and psychological disorders can be particularly hard to treat, but by boosting your brain’s neurotransmitter production, it can minimize those manic episodes and help you keep the symptoms under control. Some studies have found that this amino acid analog can actually protect brain cells from damage and reduce the toxicity levels in neural pathways. [8]

Unlike many other amino acids or amino acid analogs, l-theanine is only naturally occurring in one plant – Camellia sinensis – so it is most commonly acquired by drinking tea. The presence of this compound is only one of the many reasons to include more tea in your diet. Aside from drinking tea, there are synthetic supplements of this analog that are readily available around the world. It is best to take these supplements with food to avoid stomach upset and improve uptake.

While this compound can have many benefits for the body, it can also cause a range of side effects, including the following:

These side effects are most often found in those who take too much of this supplement, which isn’t inherently dangerous, although it can exacerbate gastrointestinal issues. L-theanine is also known to complement caffeine’s effects on the body, so consuming too much of this analog, in addition to caffeine, can have a negative impact on the nervous system. The impact that this can have on hormone production and release means that pregnant and nursing women should avoid its consumption.

Rate this article
Average rating 4.4 out of 5.0 based on 14 user(s).
Read This Next:
Popular Articles