What is Lychee Tea?

Lychee tea is a fruit tea that consists of lychee fruit, juice, flower petals or extracts mixed with traditional black tea. The lychee fruit grows on a tree that is the only member of the Litchi genus, which may explain the fruits’ truly unique appearance. This tree is native to a limited number of Chinese provinces and has been used in traditional medicine throughout history.

Lychee tea is often brewed as an iced tea to make a summer beverage, but it can also be served warm. Since it does include traditional black tea, there will be caffeine in this tea, but the sweetness of the fruit will minimize much of the astringency in this drink. As this fruit became more popular as an export around the world, the popularity of this tea also grew. 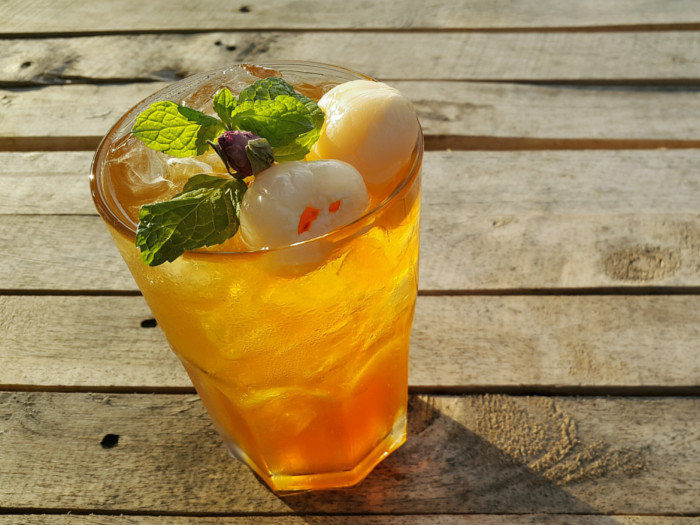 This tea has a good nutritional profile, with high levels of potassium, and good amounts of polyphenolic compounds, flavonoids, and beta-carotene, as well as vitamin C and assorted B vitamins.

The most notable benefits of lychee tea include its ability to ease digestion, aid in weight loss, and protect the heart, among others.

High levels of potassium mean that this tea can help to lower blood pressure and protect against atherosclerosis, heart attacks, and stroke.

This tea provides a major immune system bump in the form of vitamin C, helping to stimulate white blood cell production and protect against the common cold and flu.

Lychee, scientifically known as Litchi chinensis, was observed to have antitumor properties in a 2017 study published in the Nutrients journal. While further studies are required to fully explore its anticancer potential, these properties are being attributed to the bioactive compounds in the seeds, pulps, as well as the peel.

This tea was often consumed following a large meal, as the caffeine and antioxidants were believed to speed and smooth the digestive process.

How to Make Lychee Tea?

Lychee tea can be made in different ways. You can either use the extracted juice of the fruit or even the fruit themselves. In traditional use, sometimes only the flower petals were blended in with the tea for a more subtle sweetness. Presented below is more of a basic recipe.

You can garnish this tea with fresh, whole lychee fruit, tapioca pearls, or a bit of milk, depending on your preference

If you drink this tea in excess, you might experience some side effects, especially due to the caffeine content. This tea should be avoided by pregnant or breastfeeding women, as well as those with nervous disorders, or who want to reduce their caffeine intake. Some allergies to lychee exist, but they are rare and would result in mild to moderate gastrointestinal troubles.

China Coronavirus 2020: What We Need To Know

The year began with a health scare for the world, and perhaps affecting animals and humans. By the end of 2019, a pneumonia outbreak was reported in Wuhan…

Health Of Poor Brits Worsening, Widening Gap With The Rich

The health of poor brits may be worsening with successive generations. A study, published in the Journal of Epidemiology & Community Health, revealed that…