Masago: Health Benefits & How to Eat

Masago is a type of fish roe—the fully developed eggs of certain fish species—and is a popular ingredient in certain cultural cuisines.

Masago is a popular sushi ingredient, often used as a garnish or topping, made from the roe of the capelin fish, which can be found in the Arctic, Pacific and Atlantic Oceans, primarily in colder areas. Capelin are a type of smelt fish, and they are an important part of the food chain in their respective regions. The fish themselves are not a normal nutritional staple, and they are often processed for their oil or as other food ingredients, but a significant amount of the capelin are harvested for their eggs, as per a study published 2007 in the Woodhead Publishing Series in Food Science, Technology and Nutrition. [1]

Fish eggs have been traditionally eaten in many cultures due to their high nutrient density, and masago is most commonly seen on the outside of sushi rolls. While masago is typically a pale yellow in color, these fish eggs are often dyed brighter colors to be more visually appealing on the plate, or to mimic more expensive varieties of fish roe. Aside from decorating the outside of sushi rolls, these fish eggs are also mixed into various sauces and side dishes to add some extra crunch. [2] 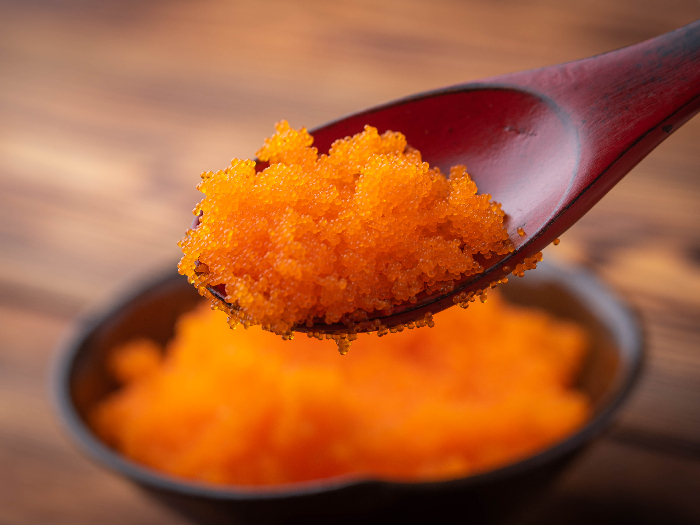 There are many different types of fish eggs, ranging from beluga sturgeon and carp to salmon and capelin, and while there are variations in nutritional density, most types of roe share a similar nutritional profile. Capelin contains a good amount of vitamin B-12, more than 50% of your daily requirement in a single tablespoon, as well as moderate amounts of magnesium, iron, selenium, vitamin D, phosphorous, and sodium, ranging between 5-10% of the recommended daily intake. Masago also contains omega-3 fatty acids, the “good” kind of fat with a number of health benefits. In a tablespoon serving, masago has roughly 40 calories, 4 grams of protein and 3 grams of fat.

With its dense nutrient profile, masago has a number of health benefits, including protecting heart health, preventing weight gain, lowering oxidative stress, and boosting the immune system, among others. 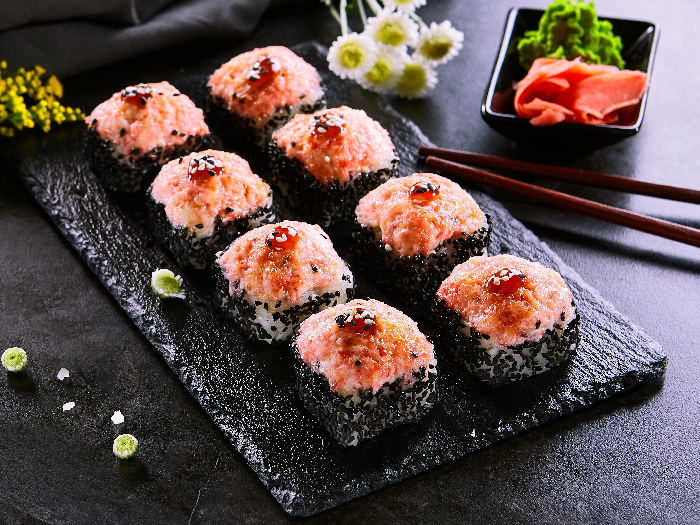 Masago is traditionally found on the outside of sushi rolls, both for flavor, texture, and decoration. However, this fish roe can also be eaten plain, by the spoonful, or mixed into other sauces, such as wasabi or soy sauce. It is also a great topping for bagels, mixed into scrambled eggs, or tossed onto a salad. Despite being a fish egg, it can function very much like a nutrient-dense grain, and its mild flavor makes it versatile in many different applications.

Let’s take a look at the potential side effects of masago below.

What is Masago Sauce?

Masago sauce is a general term for any combination of masago with other condiments, either to create a textured topping or a consistent paste. Masago sauce may contain any number of common ingredients—wasabi, soy sauce, mustard, mayonnaise, spices, lemon juice, green onion, and so many more. The key ingredient, of course, is the masago itself.

What is Masago Sushi?

Masago sushi is a designation of sushi based on the type of fish roe it is coated or topped with—the roe from the capelin fish. As mentioned above, the roe of capelin fish is often chosen due to its availability and lower price, in comparison to many other types of fish roe. Some of the most popular types of fish roe on sushi include ikura (salmon roe), uni (sea urchin roe), masago (capelin roe), and tobiko (flying fish roe). There is also caviar, which is considered the finest fish roe, and comes from beluga sturgeon. [12]

Tobiko and masago are both fish roe that are popularly found as toppings for sushi, but they are notably different in certain ways.