Merlot is one of the most popular types of red wine. It can taste rich and smoky, or a soft and plummy. Because of its range of flavor, it is adored by almost all wine drinkers.

Merlot is the name of a popular red wine, as well as the name of the dark blue-colored grapes that make this beverage. This popular table wine also lacks the sweetness that may be found in other white wine varieties, making it one of the driest options when it comes to wine. The flavor of this wine is often described as having a slight chocolate taste, making it easy to combine with other varieties, so it is a popular ingredient in combination or blended wines. For this reason, Merlot grapes are some of the most widely cultivated grapes in the world.

The color of this wine tends to be dark red, although white merlot does exist, and is simply made through a slightly different production process. In terms of alcohol content, this rich wine tends to range between 13.5-15% ABV. Merlot is produced across the world, including areas such as France, Italy, Australia, the United States, South America, Mexico, Canada, and Spain, among others.

Some people also use Merlot is a cooking wine, but many of the active ingredients and potential health benefits may be lost, although the flavor will remain. 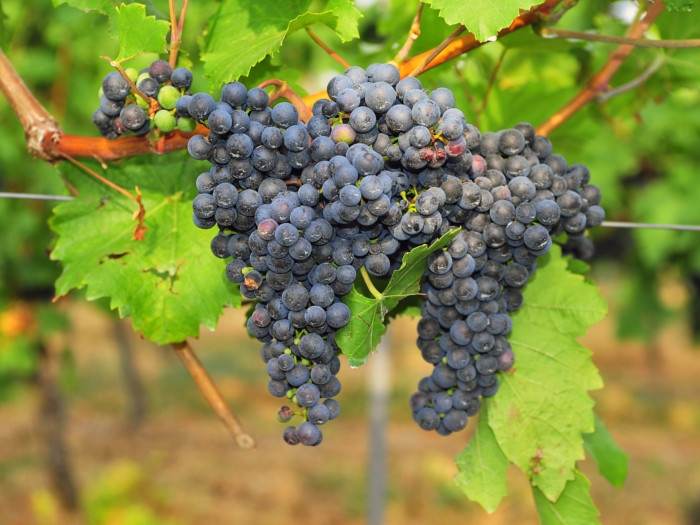 Merlot is the most planted wine grape in Bordeaux, France. Photo Credit: Shutterstock

When it comes to nutrition, a standard 5-ounce serving of wine contains around 120 calories. The wine also contains low levels of sodium, protein, and carbohydrates, as well as moderate amounts of iron, potassium, vitamin B6, and magnesium. This is in addition to the various antioxidants, such as resveratrol, that is found commonly in red wine.

A number of potential benefits of drinking this red wine have been identified, including the following:

The antioxidants present in red wine, including resveratrol, help to improve the prebiotic potential in the body, as per popular research.

As with any alcoholic beverage, drinking an excessive amount of merlot can lead to a hangover including the following:

Red wine, in particular, has been associated with a number of allergic reactions for people who are sensitive to resveratrol and other active ingredients. If you experience any negative side effects when drinking a moderate amount of Merlot, speak with your doctor, but most importantly, drink this wine in moderation.

Also, cooking with alcoholic beverages results in only some loss of alcohol content. Foods baked or simmered in alcohol can retain anywhere from 4 percent to 85 percent of the alcohol, according to a study by the U.S. Department of Agriculture’s Nutrient Data lab.

Rate this article
Average rating 4.3 out of 5.0 based on 3 user(s).
Read This Next:
Popular Articles