There are quite a few different types of milk, and while cow’s milk may be the most common, it may not always be the best choice, particularly in terms of overall nutrient content. Whether you want a healthier milk option or are simply interested in what other choices are out there, there are plenty of intriguing options for you to choose from.

The four most popular and common types of milk you can find at a grocery store include coconut milk, almond milk, cow milk, and soy milk. All of these milk varieties have different pros and cons, nutrient compositions, and processing techniques. To make the best decision, it is essential to understand as much as possible about each variety.

As the name implies, almond milk is derived from almonds but is often mixed with water to create the almond milk itself. In fact, many brands of almond milk are made up of less than 5% almonds, with the nuts actually being the second or third ingredient in the beverage. That being said, almonds are a rich source of certain nutrients, minerals, and vitamins, such as dietary fiber, protein, carbohydrates, sugar, iron, calcium, magnesium, and potassium. In terms of taste, almond milk is likely the crowd favorite in plant-based milk, and its popularity has grown significantly in recent years. [1]

Some brands, particularly those that are less expensive, often use thickening agents in the almond milk, some of which can cause gastrointestinal distress, and the cost of almond milk is notably higher than cow’s milk. One of the best things about almond milk is that it is cholesterol-free and relatively low in calories, provided you have the unsweetened variety. Many brands also fortify their almond milk with additional vitamin D and calcium, which does make it more nutritious, but this milk won’t provide a protein boost, despite the good amount of protein in these nuts. [2]

This is the most popular and common form of milk, and also the least expensive. Cow’s milk is considered dairy milk and comes in a number of varieties, including those with reduced-fat and those with lactose removed. Whole milk has none of the fat removed and has roughly 8 grams of fat per cup. It is also rich in protein, vitamin D, and calcium. Other varieties of cow’s milk include 2%, 1%, and skim milk, which have varying levels of fat and calories. Whole milk has approximately 150 calories per cup, whereas skim milk has only 80, and 1% milk is in the middle with approximately 110 calories per cup. [3]

Lactose intolerance is a major problem for certain people, so lactose-free milk is an important option. Whole milk, 2%, 1% and skim milk can all come in lactose-free versions, all of which are still rich in vitamin D and calcium. You should avoid the whole-fat varieties of this milk if you struggle with heart problems or obesity. This milk variety is also the most widely available around the world. [4] 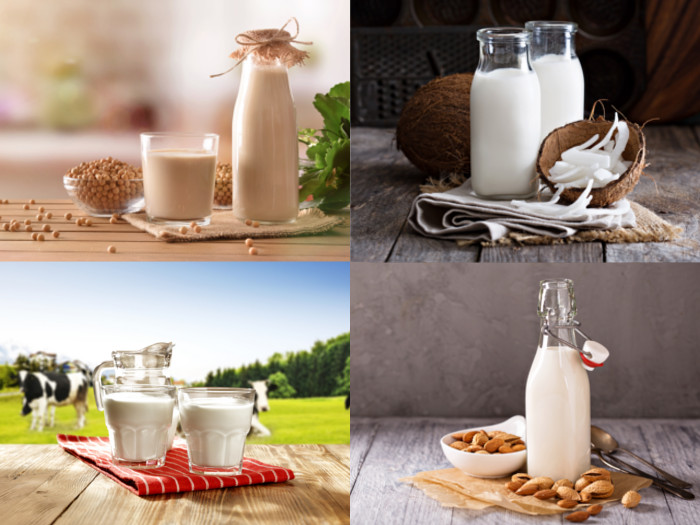 Why stick to only one milk when you have so many to choose from? Photo Credit: Shutterstock

This extremely popular variant of milk is derived from soybeans, and since it comes from plants, has no cholesterol – unlike regular dairy milk. Soy milk is also lower in calories than whole cow’s milk, with approximately 130 calories per cup. There is no lactose in this milk, which makes it a popular alternative for people who suffer from lactose intolerance, as well as vegans since it doesn’t come from an animal. Soybeans are very healthy vegetables, and the milk derived from the beans is rich in potassium, protein, and calcium if the manufacturer fortifies it with the latter mineral. It is also a great source of vitamin A and vitamin B12, which isn’t present in other forms of milk. [5]

Soy milk delivers about the same amount of protein as dairy milk but is better for people who are trying to watch their weight or cut down on cholesterol. It also has a very low level of saturated fats, compared to other types of milk. One of the negative aspects of soy milk is that drinking it in excess can have a negative effect on your thyroid hormone production, so those with thyroid disorders should avoid drinking this milk, or do so only with your doctor’s permission. [6]

One of the most popular types of milk, coconut milk comes in numerous forms. You may have something that tastes very much like coconut and is high in fat or a variation that has more of a neutral flavor and is better for you in the long run (lower in fat). Coconut milk is typically processed, rather than being the pure coconut milk straight from the source. The consistency of coconut milk is usually thicker and creamier than other plant-based milk, which makes it ideal for shakes, smoothies, and certain coffee drinks.

Coconut milk is an excellent source of medium-chain triglycerides, which can actually help your body burn fat faster, in addition to significant levels of calcium, potassium, and other vitamins. While there is less calcium in this type of milk than in cow’s milk, some varieties are fortified with extra calcium and other vitamins. Also, unlike soy and dairy milk, coconut milk is quite low in protein, so you won’t get quite as much of a nutritional boost. Research has also directly linked the consumption of coconut milk to improved heart health, weight loss, and a lower risk of heart disease. [7]

Rate this article
Average rating 3.7 out of 5.0 based on 91 user(s).
Read This Next:
Popular Articles