The most important health benefits of monk fruit include its ability to treat diabetes, help with weight loss, lower inflammation, eliminate fever, and protect the heart. It also helps to prevent allergies, slow the aging process, and lower the risk of certain types of cancer.

What is Monk Fruit?

The name monk fruit might not be very common, but perhaps you have heard of luo han guo, Buddha fruit, or longevity fruit. These are all names for Siraitia grosvenorii, a vine in the gourd family that bears a particularly valuable and powerful fruit. You can primarily find monk fruit in Thailand and certain parts of China, where it has been used for thousands of years as both, a medicinal remedy for a variety of diseases and a useful food additive, namely as a sweetener. [1]

This unusual fruit is exponentially sweeter than sugar, with high concentrations of fructose and glucose, but the sweetness comes from unique glycosides in the flesh of the fruit. In addition, this fruit is packed with antioxidants and organic compounds and vitamins that have a wide array of benefits to human health.

The fruit itself is round approximately 5 centimeters in diameter and has a sweet edible pulp inside a bitter outer rind. The fruit is attached to the plant via long tendrils, as this plant is technically a vine. Although this has been used to treat different ailments in traditional Chinese medicine for millennia, other countries only discovered the fruit in the 20th century, and it has only been in the last 20 years that major international attention has been drawn to luo han guo. The importance of its role as a sweetener has made it very valuable and monk fruit supplements and the fruit itself can now be found on a much wider scale than in the past. Now, let’s take a closer look at some of the invaluable health benefits of monk fruit. 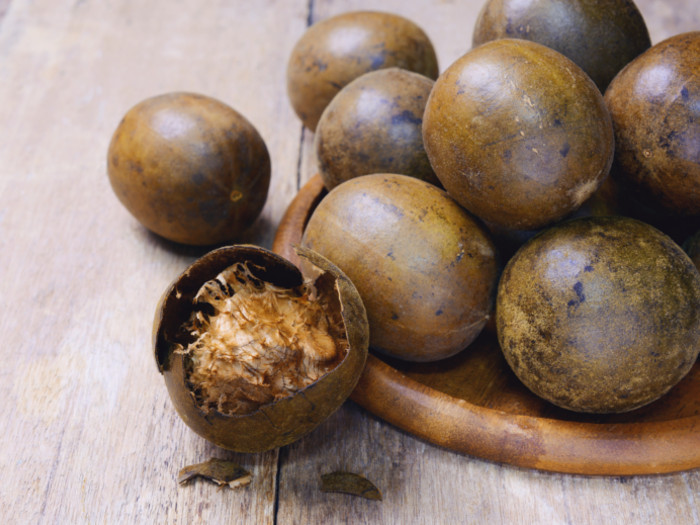 When our bodies experience something to which we are allergic, our body’s mast cells release a number of chemicals into our system, one of which is histamine. This is what causes allergic reactions like inflammation, irritation, coughing, and every other symptom of allergies. The extract of monk fruit has been proven to prevent this activity of mast cells, reducing the histamine and eliminating common allergies. This chemical is also connected to reducing asthmatic reactions, which can save lives. [2]

Although research is somewhat limited in this area, the studies that have focused on monk fruit’s impact on cancer cells have found that it has anticarcinogenic properties. [3]

A 2016 study published in the Nutrients journal shows that monk fruits help inhibit the proliferation of colorectal cancer and throat cancer cells. This is due to the presence of a triterpenoid glycoside called mogroside IVe in them. [4]

This traditional Chinese plant is known to be a very good natural substitute for sugar as it is highly sweet as well as low in calories. Research conducted on the effects of monk fruit on pancreatic cancer shows that it has the ability to promote apoptosis and cell cycle arrest. [5]

There is a unique statistic about the regions in which monk fruit naturally grows; there is a much higher than the average number of centenarians per capita. In other words, people who regularly use and consume monk fruit seem to live longer. Obviously, this is based on population statistics, but the antioxidant properties of monk fruit do have an effect on the general breaking down of the body as we age, making this a powerful anti-aging fix. [6]

Monk fruit’s organic components also prevent cholesterol from oxidizing, which is what happens before that cholesterol builds up into plaque within the arteries and blood vessels. Therefore, monk fruit has the potential to lower risks of heart attack and strokes by preventing the development of atherosclerosis. [7]

One of the most widespread and dangerous diseases in modern times is diabetes, which is an inability of the body to regulate its glucose and insulin levels in the bloodstream. An animal study by the Experimental Diabetes Research states that monk fruit sweeteners lowered total cholesterol, triglyceride, and glucose levels in subjects with mild type-2 diabetes. Conclusively, monk fruit is beneficial for the treatment of high blood sugar levels and lipid disorder which are commonly linked with diabetes. [8] [9]

Similarly, high sugar intake has been linked to obesity in many cases. Weight loss programs are strenuous and challenging for many people, but by providing a healthy and extremely sweet alternative, monk fruit extracts and supplements can be the best of both worlds for those trying to lose weight without compromising taste and the pleasure of eating. [10]

This fruit also contains a moderate concentration of vitamin C, which is one of the most important vitamins for human health. Apart from its stimulating effect on the production of white blood cells in the body, vitamin C is also important for the production of collagen, which our bodies need for the creation of cells, muscle tissue, and blood vessels. The special glycosides found within monk fruit, more specifically known as mogrosides, have also been linked to preventing various viral infections, including the Epstein Barr virus. [11]

In Chinese herbal medicine, monk fruit was often relied on as a cooling agent in various drinks and medicinal preparations. For example, if you were suffering from a fever, inflammation of the joints, or heat stroke, the anti-inflammatory properties of monk fruit could help eliminate those afflictions when the fruit juices were mixed with water or consumed directly. [12]

Word of Caution: Like so many other herbal remedies, there have been no reported cases of serious side effects with monk fruit. However, as with any plant or food group, there is a chance of side effects for a small group of people. Fortunately, due to the anti-allergenic properties of monk fruit, you’re unlikely to ever experience them. As always, it is important to always speak with an herbalist or a trained medical professional before adding a new herbal remedy to your health regimen.

Rate this article
Average rating 4.4 out of 5.0 based on 101 user(s).
Read This Next:
Popular Articles