If you haven’t added parsley root to your healthy eating regimen, you are missing out on a versatile and nutrient-dense addition of your diet.

What is Parsley Root?

Parsley root is a root vegetable, with similar leaves to the parsley plant, from which the popular herb comes. Both the leaves and the taproot are widely used around the world, although parsley root is slightly less well known. This root vegetable is often mistaken for a parsnip, due to its appearance, but it has a different nutrient composition and flavor, as per a study published in the journal Studies of Trace Elements and Health in 2012. You can prepare this pale-brown or white root vegetable much like a carrot, and while it has a crunchy texture when eaten raw, it is smooth and creamy after being cooked. [1]

This root has a flavor that is somewhere between carrot and parsley herb, giving it an earthy taste that makes it very versatile, both in cooked and raw form. It is also a storehouse of powerful nutrients with a significant potential for overall health.

As per the USDA Nutritional Database, this root has a rich nutritional profile that includes massive levels of vitamin K, vitamin A, and vitamin C, as well as high levels of iron, copper, potassium, folate, dietary fiber, calcium, flavonoids, and antioxidants. It is important to note, however, that a plant’s content of copper and other nutrients varies depending on many factors including soil composition. [2] [3] [4]

In a single cup of parsley root, there are only 22 calories, making this fiber-rich veggie a good, nutrient-dense, dietary addition for those who aim to lose weight.

The benefits of parsley root include its ability to reduce flatulence, improve skin, protect heart health, and strengthen the immune system, among others. [5]

Thanks to the high level of flavonoids and antioxidants in this root vegetable, it can help relieve oxidative stress and inflammation on the skin, reducing wrinkles and age spots, as per a study published in the Journal of Dermatological Science in 2010. [6]

Known to settle the stomach, eating only a small amount of this root vegetable can help relieve inflammation in the gut, reducing flatulence and indigestion. 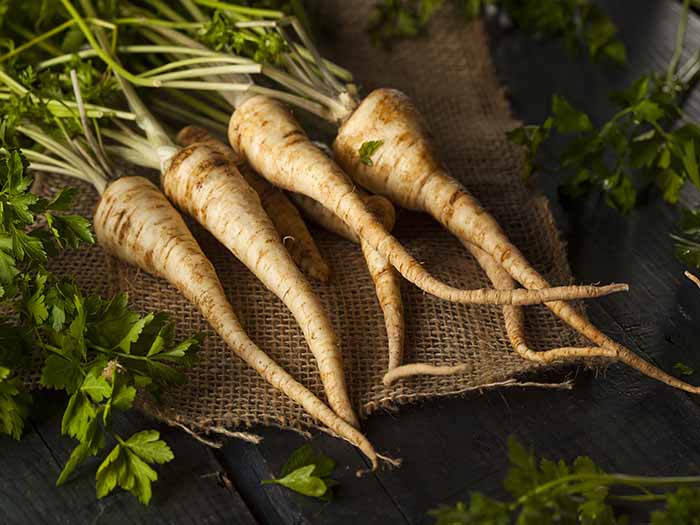 Parsley root is light beige, shaped like a carrot, but slender like a parsnip. Photo Credit: Shutterstock

With high levels of potassium, this root vegetable can help lower blood pressure, due to potassium’s role as a vasodilator, protecting against stroke and other types of heart diseases. Parsley’s anti-inflammatory and antioxidant properties are also cardioprotective, as per a study published in the Handbook of Herbs and Spices in 2012. [7] [8]

There is a high level of vitamin C that can give the immune system a major boost, along with the antioxidants which reduce free radical damage in the body. The immune system gets an additional boost from the antiviral and antibacterial properties of parsley. [9] [10]

According to a research published in The American Journal of Clinical Nutrition, [11]with more than 1,000% of your daily requirement of vitamin K, parsley root is integral to building bone density, considering that vitamin K significantly contributes to that development. Plant sterols, which parsley contains, are favorable to help prevent bone thinning and osteoporosis later in life. [12]

There are a number of great ways to use this root in your daily diet, such as baking, frying, sautéing or steaming the root, or simply eating it raw. Many people treat parsley root in the same way that they treat carrots, so slicing it up for raw salads is very popular. Boiling this root with potatoes and making a more flavorful variety of mashed potatoes is also a great way to use this root. You can also dry the root and grind it down to make a great flavorful spice for marinades, spice blends, and dry rubs. [13]

If you are lacking this root in your kitchen, but a recipe calls for it, you can easily replace this mildly-flavored vegetable with turnips, carrots or parsnips. In terms of physical consistency, all three of these substitutes work adequately, and they also possess dense mineral content and unique antioxidants. The flavor varies slightly, but once you cook this root, much of the defining flavor is lost.

Parsnips are light yellow or white in color and are slightly thicker than parsley root; parsnips also have a sweeter, more defined flavor that isn’t lost during cooking. Parsnips smell slightly of celery, while parsley root smells more of the parsley herb. Although you can include both of these root vegetables in soups and strews, parsnips are rarely eaten raw, while one of the most popular ways to eat parsley root is raw. [14]

Rate this article
Average rating 4.0 out of 5.0 based on 67 user(s).
Read This Next:
Popular Articles