Perennial herbs are commonly used in everything from culinary applications to alternative healing, so knowing some of the best options is wise if you want to live a healthier life!

What are Perennial Herbs?

A perennial herb is an herbaceous plant that grows for more than 2 years, as opposed to annual or biennial plants. Some of the most common perennial herbs include basil, parsley, and cilantro. Most perennial plants flourish in the spring and summer, bearing their seeds, fruit or flowers, and then die in the cold of autumn and winter. However, from their roots, they are able to return to life the following spring. For this reason, perennial plants are often preferred by gardeners and herbal enthusiasts. [1]

There are a few dozen perennial herbs, some of which are frequently used in kitchens around the world. If these herbs grow in more tropical or warm climates, they may grow throughout the year, but in temperate and colder climates, they typically go dormant or die in the winter months. 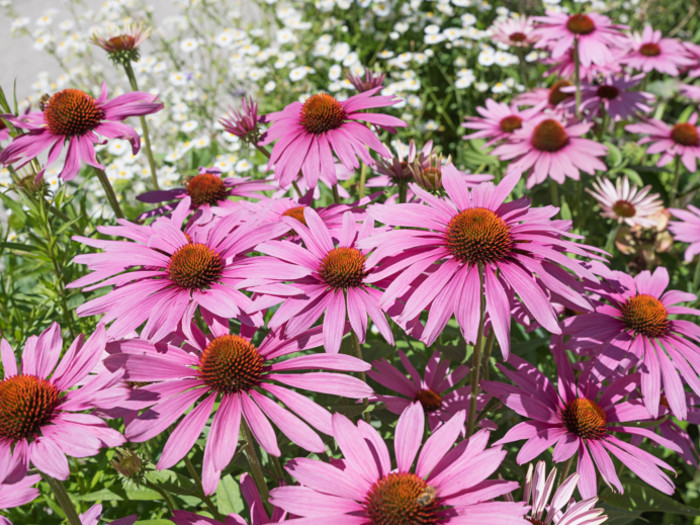 Purple coneflowers are one of the best classic perennials to have in your garden. Photo Credit: Shutterstock

The most well known perennial herbs include mint, sage, oregano, lavender, tarragon, chicory, horseradish, lemongrass, thyme, echinacea, caraway, catnip, feverfew, lemon balm, lovage, chamomile, sorel, winter savory, among many others. Let us look at some of them in detail below:

Herbs from the lemongrass genus are Asian and African and are praised for their citrus flavor and impressive antioxidant content. This herb is particularly popular in soups and curries for its strong flavor but also pairs well with meat and fish dishes. To store fresh lemongrass, wrap it tightly in plastic and store in the fridge for up to two weeks. [2]

This herb is closely related to onions and can confer a similar taste in many different meals. The stems of this herb are hollow, and are the main component that is eaten; the leaves are removed. Native to both the old and new worlds, this Allium species delivers a number of antioxidants and sulfuric compounds when eaten. You will commonly find chives as a topping for soups, as well as potatoes, meat dishes, and salads. [3]

This root vegetable spice has a potent kick that can clear the sinuses and has high levels of vitamin C and dietary fiber, as well as isothiocyanates and various other volatile oils. Horseradish sauce is made from the grated root mixed with vinegar and is the most common form this spice is found in. You can store fresh horseradish in an airtight jar or container for up to six months. [4]

Another root vegetable herb, ginger has a key active ingredient called gingerol that delivers many of the health benefits associated with the herb. It has a similar sinus-clearing effect as horseradish, as well as many antioxidants and essential nutrients. Ginger can be used in the production of wine or tea, while the flavor is popular in many desserts and baked goods. [5]

One of the most recognizable perennial herbs, mint is actually a genus of closely related plants, all of whom have powerful anti-inflammatory and antioxidant capacities. Mint is often used as a garnish or a flavoring ingredient in beverages and baked goods but also works as a complement to savory dishes. [6]

Native to the Mediterranean region, sage has a warm, aromatic flavor that makes it popular in a great deal of Italian cooking, and it can also be used for medicinal purposes. You can store fresh sage in the refrigerator after wrapping the leaves in damp paper towels and putting them in a plastic bag. [7]

Found in Europe and North America, tarragon is popular in French cooking and is often found in chicken and fish dishes. Rich in certain antioxidants, this herb can be stored in the fridge, wrapped in damp paper towels inside a plastic bag. [8]

Originating in the Mediterranean, rosemary has a fragrant aroma similar to an evergreen tree and is a popular flavoring addition to meat and potato dishes. You can store fresh rosemary by loosely wrapping it in a wet paper towel in the refrigerator. [9]

Rate this article
Average rating 4.2 out of 5.0 based on 4 user(s).
Read This Next:
Popular Articles