What is Phosphoric Acid

Phosphoric acid is one of the most commonly used and widely studied mineral acids, and due to its presence in so many consumer products, it is important to know its effects and potential risks.

What is Phosphoric Acid?

When you look at a can of carbonated soda, one of the main ingredients is phosphoric acid, a colorless, odorless, acid with the chemical formula of H3PO4. It is produced through two main processes; the raw form is made by treating phosphorous-containing rock with sulphuric acid, while the commercial-grade variety is usually made by chemically treating white phosphorous, as per a detailed paper published in the U.S. National Library of Medicine. Its unique and versatile properties make it ideal for inclusion in many different products, particularly because of its pleasant taste when appropriately diluted. [1]

Not only is this acid used in many industrial and commercial processes, but it is also found in natural sources, such as various fruits and their juices. The amount of phosphorous that we take in on a daily basis must be monitored, as, unlike many other micronutrients in our diet, too much phosphorous can result in a number of health issues. 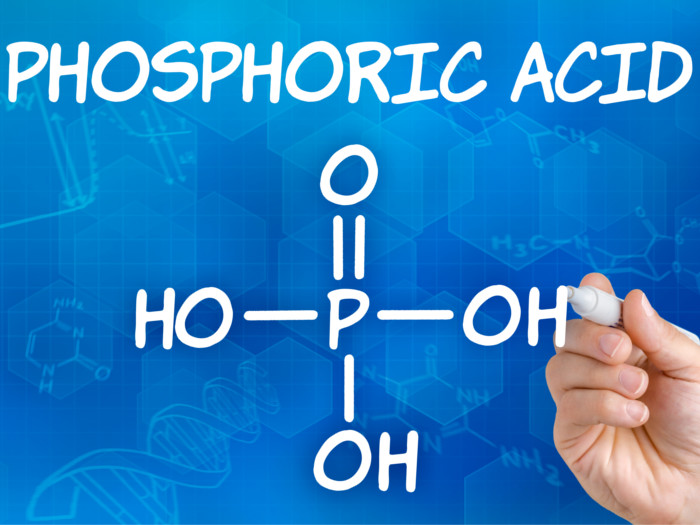 As mentioned, phosphoric acid is a relatively weak acid with corrosive properties that can wear down alloys, porcelain, and ferrous metals. Composed of 4 atoms of oxygen, 3 atoms of hydrogen, and 1 atom of phosphorous, this acid is soluble in alcohol, but only partially dissociates in water. Depending on its concentration and temperature, phosphoric acid will either be a transparent solid or a sparkling liquid. It is a non-volatile liquid and has a somewhat syrupy consistency in its liquid form. This simultaneously flexible and stable structure is partly why it has become so widely used around the world.

As a bactericide and disinfectant substance, it is able to prevent the growth of bacteria or fungi, particularly in food and beverage applications, according to a study published in the Journal of Applied Oral Science. As the name suggests, it is also acid, and thus works as an acidulant in various applications. [2]

This chemical is used in an eclectic range of industries, from agriculture and food and beverage to dentistry and industrial cleaning.

The most relevant use of phosphoric acid for most people is in the food they eat. Phosphoric acid is a major ingredient in most carbonated soft drinks, particularly those that are of a darker color. They provide some of the bubbling acidity, as well as a sweetly pleasant flavor. It is also included in many foods as an acidity regulator, such as in processed meat and cheese, jams, and preserves. It can have potential side effects as per a study published in the Journal of Clinical Epidemiology. [3] [4]

The corrosive nature of phosphoric acid makes it an ideal option for cleaning off rust from industrial machinery and equipment, as suggested in a research published in the journal Electrochimica Acta. It combines with iron oxide and becomes ferric phosphate, which is very easy to remove. As per the U.S. Department of Health and Human Services, it is used in a variety of cleaning products available in the market today. [5]

The disinfectant and bactericidal qualities of phosphoric acid make it popular as an ingredient in fertilizer, which is one of the most high-volume applications of this acid. It is also included in the feed for livestock and poultry, due to its pleasant flavor. [7]

The ability of phosphoric acid to corrode porcelain makes it useful in dentistry, as it can etch and clean teeth very effectively. It may also be included in toothpaste and mouthwash liquids for its acidity, flavor, and a slight effect on tooth whitening. [8]

While phosphoric is casually included in countless products we may consider, it is important to remember that this acid should only be consumed in moderation. Phosphoric acid breaks down into phosphorous in our bodies, and while this is an essential nutrient for many processes, it is possible to consume an excessive amount.

Phosphorous is needed by the body to build strong bones and teeth, and also to generate energy and ensure that our muscles function properly. It also helps our kidneys filter waste. That being said, most people get a sufficient amount of phosphorus in their diet, so an excess of this element, through the consumption of phosphoric acid, can be dangerous.

As a standalone chemical substance, phosphoric acid is also dangerous, and should not be inhaled or ingested. If it comes into contact with your skin or eyes, it should be rinsed off immediately, and eyes should be flushed for 10-15 minutes. Medical attention should then be sought. Despite being such a common ingredient, it still poses certain threats and should be handled carefully, and consumed in food and beverage products in moderation.