Many pregnant women suffer from what they call pregnancy brain, which is an informal way of referring to how some pregnant women feel more forgetful, easily distracted, or absent-minded than their usual calm and collected selves. In the past, there was some debate about whether pregnancy brain was a real condition, or just an urban legend, but both anecdotal and formal evidence has shown that pregnancy brain does exist. Therefore, every expecting mother should have some understanding of this condition, as well as the causes, symptoms, and potential remedies.

What is Pregnancy Brain?

Pregnancy brain is the informal term for the apparent struggles that some women have with their memory and cognitive ability while carrying their child. Also affectionally called “momnesia” or “baby brain”, women have been experiencing this for generations, but its existence has often been called into question.

Even a highly organized woman may experience moments during pregnancy where she may forget why she entered a room, the cross-streets of her favorite store, or the code for the garage door. Spatial awareness can also suffer during “pregnancy brain”, meaning that remembering where you left things becomes more difficult. Since this condition is somewhat subjective in its symptoms, duration, and severity, there hasn’t been extensive research done. However, recent studies have found that not only are there multiple causes of pregnancy brain, but even long-lasting effects that could take years to fully manifest. [1] 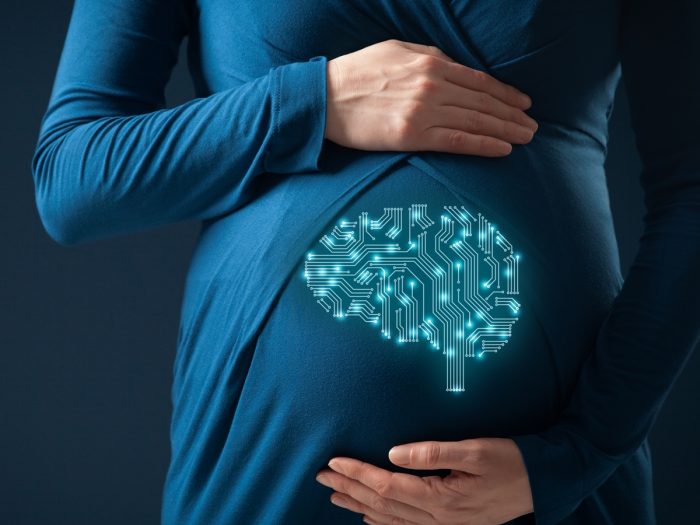 Taking care of your mental health during pregnancy is important. Photo Credit: Shutterstock

Pregnancy brain is caused by a variety of factors, including stress, anxiety, sleep deprivation, hormonal fluctuations, a busy schedule or a shift in priorities, among others.

Stress and Anxiety – There is a lot of stress and anxiety implicit in a pregnancy, and this can cause changes in the hormonal balance, while also interrupting cognitive processes like memory retention, concentration, and problem-solving. [2]

Sleep – Sleep deprivation is one of the fastest ways to compromise your alertness and memory, and women who are carrying a child often struggle to get a full night’s sleep. [3]

Hormones – There is a massive rise in certain hormones during pregnancy, such as estrogen and progesterone, which can alter your brain chemistry and disrupt your normal cognitive speed. [4]

Schedule – There are thousands of things to think about when you are pregnant, and adding a busy schedule on top of that can be overwhelming for some women, resulting in a slight decline of cognitive function.

Priority Changes – During pregnancy, your brain may begin to adapt to a more emotional state of caring for your baby, rather than constantly focusing on the wellness of oneself. And can lead to physical changes in the brain that make certain things more important to think about and remember, rather than trivial knowledge. [5]

Many women have described pregnancy brain as the inability to diversify their attention or control their own thoughts. This is perfectly exemplified by a woman opening her mouth to say something, and then instantly forgetting everything she was about to announce. Walking into a room and immediately forgetting the reason for going there is another common example given by women with pregnancy brain. These symptoms could be sustained throughout the pregnancy, which can almost feel like adopting a new personality for nine months, or it can come in acute waves, based on some of the risk factors outlined above. [6]

There are many rumors and myths about pregnancy brain that aren’t completely true but may have some sliver of truth in them. For example, many people argued that being pregnant makes a woman’s brain shrink, which is a rather reductive explanation of the phenomenon. In fact, a woman’s brain does change in its composition, largely in the amount of gray matter that it contains.

Similar to the rapid chemical changes that occur during puberty, being pregnant can also cause dramatic changes in neural connections and cognitive demands. Recent research has shown that gray matter volume may continue to change for at least two years after the birth of your child, as your brain restructures to the new emotions, tasks, and responsibilities of parenthood. [7]

While the symptoms of forgetfulness and absent-mindedness will likely fade within the first few weeks following the birth of your child, your brain will continue to adapt and change for months or years to come.

If you are struggling with the brain fog of “momnesia”, there are a few effective treatments and home remedies you can try, such as writing more things down, streamlining your responsibilities and shifting your diet, among other things.

If you eat a diet that is rich in healthy fats, or those that are considered “brain foods”, you can boost the blood flow in your brain, eliminate oxidative stress, and kickstart your cognition. Furthermore, adding foods that have choline in them can help improve brain function. Some of the best things to add to your diet include green tea (in moderation), avocados, lean proteins, peanuts, rice and egg-based dishes. [8]

Improving your organizational skills can be as easy as writing things down more often, from your weekly schedule and tasks for the day to your grocery list and scheduled doctor’s appointments.

Don’t be afraid to delegate some of your extra responsibilities to friends and family members. Pregnancy can be exhausting, but with a strong support network in place, you can minimize the challenges of pregnancy brain. [9]