Pregnancy Symptoms before a Missed Period

Some of the most common pregnancy symptoms before a missed period include fatigue, nausea, sensitivity to smell, higher body temperature, tender breasts, and increased urination, among others.

One of the first hormonal responses the following fertilization will be the changes in your breasts, which will start preparing for developing milk to feed your baby. This can happen in the first week or so, and your breasts may feel sore, heavy or unusually tender to the touch. [1] 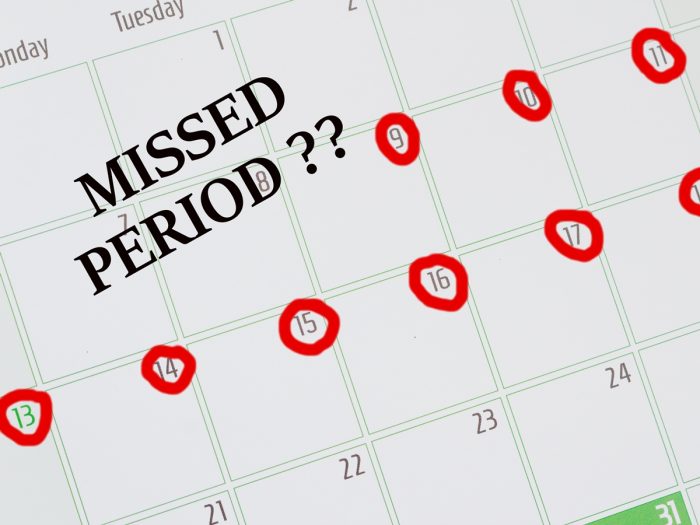 One of the most telling signs of pregnancy is missing your period. Photo Credit: Shutterstock

If you notice that you are going to the bathroom far more frequently than usual, it could be the initial increase in blood that your body will start producing after conception. [2]

Your senses can react in strange ways to pregnancy, and a heightened sense of smell may be one of the first and strongest reactions. This can make your sense more powerful, but also change your olfactory response to certain foods or substances that you used to find pleasant. [3]

From the moment of conception, your body gets to work on the foundation of carrying a child. This work will require energy, and will likely cause your basal body temperature to rise, almost giving you the sensation of being feverish, in some situations.

When your body detects a pregnancy, and the egg has been implanted in the uterus, your body will release a number of hormones, including progesterone, which can cause surprisingly strong periods of fatigue even early on in the pregnancy. [4]

Some morning sickness will be in direct response to the rush of hormones filling your body, which can happen in the first week or so of pregnancy, before a missed period. This nausea and vomiting can be quite unpleasant but often acts as the first indication that you may be pregnant. It can also bring on depression symptoms. [5]

When progesterone is released into the body, it can cause a decrease in activity in the gastrointestinal tract, meaning that more intestinal gas may build up, causing you to feel bloated long before you miss your period. [6]

The changes to your breasts occur very rapidly in pregnancy, and in the case of your areolas, they can darken and widen in diameter in the first few weeks of pregnancy. This is a clear indication of being pregnant, but this doesn’t happen to every woman, and in some cases, will happen much later in the pregnancy. [7]

With drastic shifts in your hormonal levels within a week or two of conception, mood swings are a good indicator that something is going on in your body, and pregnancy is often a good guess! [8]

Your preference or distaste for certain foods can happen very rapidly after you have become pregnant. While many women say that their preferences and dietary cravings don’t happen until the second or third month, the hormonal changes that affect your sense of taste can happen much earlier. [9]

As your blood pressure will be suppressed early on in your pregnancy, it is possible that you will feel some sense of dizziness or lightheadedness before you miss a period and suspect that you may be with child.

One of the most common symptoms of pregnancy, it can begin almost immediately following conception, since the burst of progesterone can affect how your gastrointestinal system functions. [10]

Blood pressure fluctuations and increased stress levels in your body can manifest in headaches or migraines in the weeks after fertilization.

Some bleeding is normal about 6-12 days following fertilization of the egg when it is implanted in the uterus, but this still may occur before your period is due. [11]

Rate this article
Average rating 4.0 out of 5.0 based on 221 user(s).
Read This Next:
Popular Articles