Guide To Pregnancy Tea: What To Take & What To Avoid

A cup of tea has the capacity to warm the soul. When you have swollen feet, persistent back pain, and a waddling walk, it can be a huge relief to sit back with a hot cuppa. Some teas also have the capacity to soothe frayed nerves and help us relax. But how safe is it during pregnancy? Is there a cap on how much you can drink? With different pregnancy teas available in the market, our choices for a hot beverage have certainly widened. But what does pregnancy tea mean and are there any side-effects?

Before we understand whether or not you can drink tea during pregnancy, it is important to understand that all teas are not the same. Although tea is by definition derived from the leaves of the Camellia sinensis, today we put herbal and fruit teas in the same bracket. The nature and properties of the tea will depend on what it is derived from. 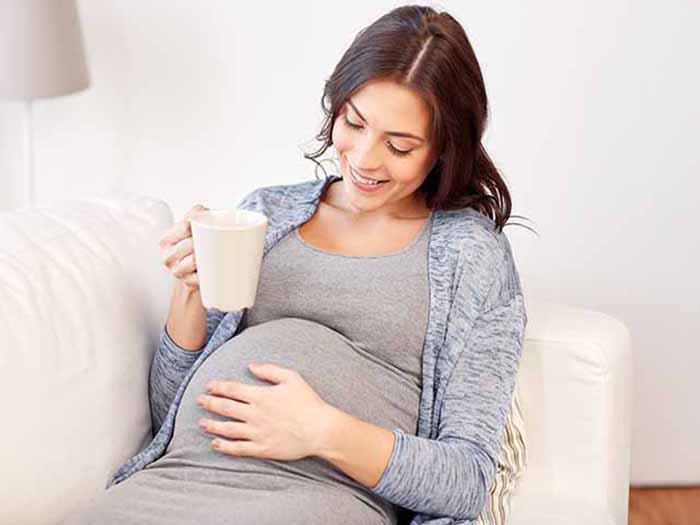 Certain teas can be beneficial during pregnancy. Photo Credit: Shutterstock

While drinking tea during pregnancy is perfectly ok, the only matter of concern is its caffeine content. Research has shown that caffeine can be harmful for the unborn baby, but only in a significant quantity. Caffeine intake is frowned upon because it acts as a stimulant and a diuretic. As a stimulant, it can raise blood pressure and heart rate. As a diuretic, it increases the frequency of urination, which can lead to depletion of body fluids. But perhaps most worrying of all, caffeine can cross the placenta to the fetus. While you may be able to metabolize caffeine, your baby cannot. It can cause restlessness and disrupts the baby’s sleep patterns.

Not surprisingly, most research on pregnancy tea focuses largely on its caffeine content. For instance, a 2018 research published in The American Journal of Clinical Nutrition warning against the adverse effects of drinking tea during pregnancy, focused on the effects of caffeine. Another research that found a link between low birth weight and pregnancy also focused on maternal caffeine intake. [1] [2]

Both the researches found that high caffeine intake does indeed have an adverse effect on the health of the unborn child and the pregnant woman. But what we have to remember is that for it to be harmful, the caffeine intake must be fairly high. How much caffeine is unsafe during pregnancy?

According to the American Pregnancy Association, a moderate intake of caffeine should not have any effect on your child. This amount can be more than 150 mg, but less than 300 mg. A cup (240 g) of green tea contains approximately 29 mg caffeine, while the average content in black tea is 48 mg. It is definitely less than an average 8 oz cup of brewed coffee that contains 95-165 mg caffeine. A 2019 research, published in the journal Nutrients found that low consumption of tea (>200 mg a day) had no effect on the baby’s growth. But the most important factor to keep in mind the 300 mg a day includes all the caffeine you are taking in a day. [3] [4] [5] [6]

Another concern regarding tea was that it may affect the absorption of folic acid. However, research on this topic did not support this association. So, keep an eye on the caffeine content when drinking tea. If you like to take tea frequently, it is better to opt for decaffeinated tea. But it is always best to talk to your doctor if you have any queries or underlying health problems.

Best Teas to Drink During Pregnancy

A low to moderate consumption of green, black or oolong tea is safe enough in terms of caffeine. You can also benefit from the antioxidant content in the tea. It would be best to switch to decaffeinated tea if your consumption is high.

The other option is to switch to herbal teas. Herbal teas are made from the shoots, leaves, roots, flowers, and stems of various herbs. Herbalists have long used teas to soothe pregnant women. Herb teas are a safer choice because they don’t contain caffeine. However, do read the label to be sure. As with most things during pregnancy, do take the advice of a midwife or your doctor. The American Pregnancy Association recommends the following herbal teas:

So popular is this herb in addressing pregnancy-related issues that it was known as a female herb. Dr. D. Jill Mallory MD writing in Integrative Medicine clarified that although the herb was believed to induce labor, it is more effective in helping the uterine muscles or increasing the blood flow to the uterus. Although research is conflicting on this account, traditionally it was seen as very beneficial. As a herb generally regarded as safe, Dr. Mallory recommends 1–3 cups daily. [7]

According to the Raspberry Delights Cookbook, the tea was also believed to protect the baby’s immune system and strengthen his/her bones. It is made by boiling the dried leaves in water and then steeping them for 10 minutes. [8]

A 2018 review published in the journal Foods, ginger was found very effective in treating nausea and vomiting during pregnancy without any harmful side-effects. The study found that consumption of 1g of fresh ginger for four days to be an effective dose. Follow our ginger tea recipe for quick relief. [9]

Known for its soothing properties, chamomile can help in relieving the anxiety of an expectant mother. It can also help them get a good night’s sleep. One study revealed that it can even help in inducing labor in post-term pregnancy. However, the evidence on the safety of the tea is mixed. So, be moderate to low in its consumption. Chamomile tea is easily available as tea bags. To make the tea, steep the tea bag in hot water for 5-10 minutes. [10]

The ever-favorite peppermint leaves are used to make an aromatic tea that can help in digestive problems often associated with pregnancy, such as vomiting, indigestion, and dyspepsia. However, it can also worsen heartburn, which is a common problem during pregnancy. The minty taste of peppermint is delicious when used in cold tea. Boil the fresh peppermint leaves in a cup of water and let steep for 5-10 minutes. Add a little honey and lemon juice. You can drink this warm or let it chill. Serve the cold tea with ice. The cold tea can also cool you down when the temperature goes up.

The lemon balm tea is used for mild stress and minor digestive problems. It should be taken in moderation. However, if you have an underactive thyroid, it is best to avoid this herb. To make the tea, boil fresh, chopped lemon balm leaves in water and then let steep for 5-10 minutes. Alternatively steep dried leaves or tea bags in hot water for the same time.

Word of Caution: When taking teas during pregnancy, there are some factors you must keep in mind:

Can you drink green tea during your pregnancy?

One of the frequent queries we receive is whether or not green tea is safe to drink during pregnancy. Green tea is perfectly safe to drink during pregnancy as long as you keep your caffeine intake within the 300 mg a day. According to USDA, 100 gm of green tea contains 12 mg caffeine. However, when calculating your intake, you should also include any other caffeine-containing food you are taking in a day, such as other teas, coffee, or cola. If you like to sip at green tea throughout the day, switching to decaf may be a better choice. [11]

Teas to Avoid During Pregnancy

While we think of herbs as generally safe, one must keep in mind that herbs had many traditional uses. One of these was to induce a miscarriage. Hence, there are certain herbs that should be avoided during pregnancy and the same applies to herbal teas. In fact, many herbal teas which were traditionally recommended for pregnant women were later found to be harmful.

For instance, stinging nettle that was once recommended for raising iron levels was later found unsafe. It can contribute to miscarriage. Other such herbs which were traditionally used, but are now found to be controversial are: [12]

So, talk to your doctor, keep your caffeine intake low and be safe. And no matter what the label says, always check the ingredients and the caffeine level in your pregnancy tea.