Quinoa is one of the superfoods that has become the star of the party for vegans and vegetarians. This tiny, nutty-tasting seed is rich in fiber, protein, and essential vitamins and minerals. You can find it in most health stores as well as on restaurant menus with interesting options like quinoa burger, salad, and even brownies. It also lends itself to soft and fluffy pilafs and can be transformed into different varieties of pasta. But is quinoa gluten-free and can it safely be consumed by people who have gluten sensitivity? Let’s find out.

Quinoa is gluten-free and is often advertised as a protein-rich substitute for gluten-containing grains like wheat, barley, and rye. It is not actually a grain but a pseudocereal seed that is a common staple crop in South America. Quinoa contains all the nine essential amino acids of protein, which is one of the key reasons that it is favored by vegetarians and vegans. According to the USDA Food Central Database, one cup of cooked quinoa has 222 calories, 5 grams of fiber, and 8 grams of protein. It also is nutrient-rich with vitamin B, magnesium, calcium, iron, and potassium. [1] [2] 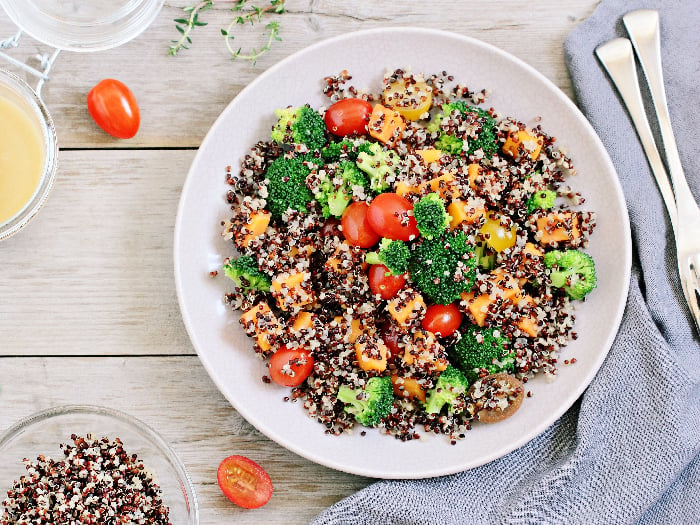 While quinoa is gluten-free, it can trigger immune responses in people with celiac disease. Photo Credit: Shutterstock

Is Quinoa A Safe Gluten-Free Alternative?

While quinoa is gluten-free, it is not necessarily a safe gluten-free alternative. Here’s why.

Risk of Contamination With Other Gluten Products

Cross-contamination could be an issue with quinoa as pseudocereals are often processed in facilities that deal with other grains. A pilot study published in the Journal of the American Dietetic Association found that 9 out of 22 gluten-free grains, seeds, and flours contained gluten levels that could cause damage to people with gluten sensitivities. The gluten levels were above the standard set by the USFDA. These packaged grains, seeds, and flours were not labeled ‘gluten-free’ but are conventionally considered as gluten-free options. So, to be safe, it is best to buy quinoa or other products that are specifically labeled as ‘gluten-free’. [3]

While quinoa is gluten-free, research studies have shown that certain cereals and pseudocereals like corn and quinoa could trigger the immune response in certain celiac patients. A 2012 report in The American Journal of Clinical Nutrition found that two cultivars of quinoa – Ayacuchana and Pasankalla – could potentially stimulate the adaptive and innate immune responses in some patients with celiac disease. The study had tested fifteen cultivars of quinoa, of which 4 cultivars contained celiac-toxic epitopes (antigen determinants) but they were below the maximum levels permitted by the FDA for gluten-free foods. [5]

However, a study published in The American Journal of Gastroenterology in 2014 sought to refute the premise that quinoa may be harmful to people with celiac disease. The researchers found that people with celiac could safely tolerate 50g of quinoa for 6 weeks. Moreover, they showed improvement in their health, including registering a mild hypocholesterolemic effect. [6]

With conflicting conclusions in research reports, it is advisable to watch the response in the body after eating quinoa. You could try these tips given by dieticians on the National Celiac Association website to rule out other possibilities that are triggering a negative response in the body. [7]

Rinse raw quinoa: It is best to rinse and drain raw quinoa in a sieve before cooking. This helps remove natural plant compounds called saponins that may cause stomach aches. For packaged products such as quinoa pasta or quinoa flakes, it is not necessary as the manufacturer has already done so.

Fiber content: Quinoa has a high fiber content, which can cause tummy aches if the body is not used to a new or increased fiber source. Try eating a smaller amount and notice if you are having a negative response in the body. Alternatively, quinoa flakes have a lower fiber content than raw quinoa and that can help you adjust to eating more fiber. Make sure you have plenty of water during the day and try and avoid eating other foods that have a high fiber content (legumes, fruits, etc) in the same meal.

Gluten-free label: Always buy products that are specifically labeled ‘gluten-free’. Check the ingredients in products that contain a mix of quinoa and other grains before buying.

Quinoa vs Rice: Which is Healthier
Popular Articles