What is Red Light Therapy?

Red light therapy is a low-level laser therapy that is intended to stimulate certain biological processes beneath the skin, including regeneration, repair, and blood flow, among others. This approach to non-invasive healing is celebrated in both Eastern and Western medical practices, which is quite rare. In America and Europe, this type of therapy goes by many names, including photobiostimulation, photonic stimulation, and low-intensity light therapy, among others. In India and other parts of Asia, this procedure is known as Colorpuncture and focuses a narrow beam of red light to mimic the insertion of an acupuncture needle at specific points. While there are a few minor safety concerns for people with some health conditions, red light therapy is generally considered very safe. [1] 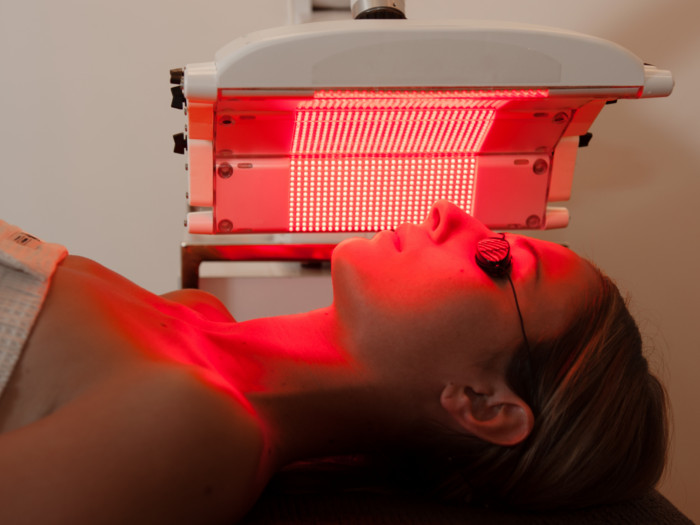 How Does Red Light Therapy Work?

When a red LED light with a wavelength of between 620nm and 800nm is shined on the skin, it penetrates to roughly 10 millimeters. Unlike more dangerous ultraviolet radiation that can give you sunburns and increase your risk of cancer, red light therapy does not have those harmful side effects. In fact, it is considered an effective means of boosting collagen production, reducing inflammation, and stimulating your lymphatic system. This process does not generate any heat and doesn’t damage healthy cells. Instead, it has a positive effect on the nervous system, metabolism, and regenerative processes. Depending on the area of your body exposed to the light, as well as the desired effects, a session could last between 10 and 45 minutes and may be repeated once each week for up to three months. [2]

The many red light therapy benefits include its ability to heal wounds, prevent premature aging, help with depression, and strengthen the immune system, among others.

By increasing circulation, this therapy can speed the formation of collagen and the healing of wounds.

Those same antioxidant processes will also reduce the appearance of blemishes, wrinkles, and age spots, helping to keep you look young. [5]

When this therapy is administered to the scalp or areas where you are losing hair, it can stimulate circulation and bring new life to follicles and stop hair loss. [6]

This treatment can help to repair soft tissue and stimulate the production of collagen in the joints, which can improve skeletal health and reduce symptoms of arthritis. [7]

Using this therapy on the thyroid has shown remarkable results, and improved hormonal control throughout the body, which can aid in managing mood and depression symptoms. [8]

The primary difference between these two light therapies is their intended effect and the wavelength of light being used.

There are very few side effects of this therapy, although some people report the following:

You may want to reduce your time under the light and inform the therapist how you are feeling. Furthermore, if you have an autoimmune disease, cancer, or are pregnant, it is best to avoid using this light-based therapy.