What Is Red Palm Oil & Is It Good For You

Red palm oil may not have as many takers as its popular tropical counterparts – coconut oil and avocado oil, but it has managed to attract a niche cult. This is especially true after the oil was made available in supermarkets with ecolabels of being sustainably produced. Red palm oil, with its fiery color and strong aroma, may not be the first choice for many, but there are health benefits associated with this oil. Let’s find out more.

What Is Red Palm Oil?

Red palm oil is made from the fruit of the oil palm tree (Elaeis guineensis). Native to West Africa, the tree is grown in many tropical countries including Indonesia and Malaysia. [1]

In its unprocessed state, palm oil is dark red in color as it contains beta carotene, an orange-red pigment that gives carrots their distinctive color. Red palm oil has a pungent taste and smell, which needs some time to get used to. Its color, taste, and smell are the reasons why it is not favored by many. A more popular version is the refined, bleached, and deodorized (RBD) palm oil, widely sold in supermarkets, as it is bland, odorless, and has a light yellow color. 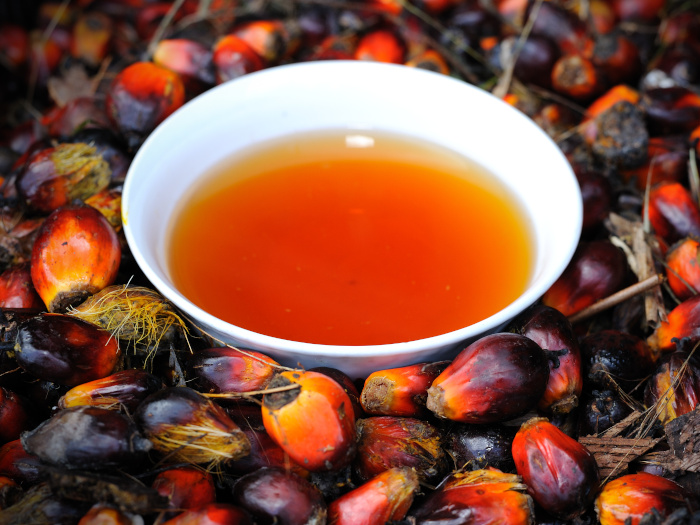 Is Red Palm Oil Good For You?

Virgin palm oil gained a lot of renewed international consumer interest in 2013 after Dr. Oz, a heart surgeon-turned-television personality, claimed that the oil is one of the most nutritious oils available. He also said that the content of carotenoid and tocotrienol antioxidants help give it a significant edge over coconut oil. While certain brands do offer virgin sustainable palm oil, it has not become as popular as other publicized oils associated with health properties such as coconut oil and avocado oil. Let us weigh the benefits and the downsides involved with using unprocessed palm oil.

Researchers have found that red palm oil may reduce the level of endogenous cholesterol and have linked it to the ratio of its saturated fatty acid to unsaturated fatty acid content and its high concentration of antioxidants. These potent antioxidants include beta-carotene, tocotrienols, tocopherols, and vitamin E. Another study suggested that crude palm oil, due to its beta-carotene content, may protect against vitamin A deficiency. [7] [8] [9]

Furthermore, a recent study published in 2015 in the World Journal of Cardiology revealed that palm oil does not have any incremental risks for cardiovascular disease as compared to other oils that are rich in mono or polyunsaturated fats. However, further studies are needed to understand its impact on heart health biomarkers. [10]

One of the biggest downsides of using palm oil of any kind is that palm oil trees are reputed to cause deforestation. This troubling issue of deforestation due to palm oil trees has led to the critical endangerment and/or extinction of the orangutan, the Sumatran tiger, and the Asian rhinoceros. [11] [12]

However, because palm oil yields more oil than any other source, it is important to produce it more sustainably. Additionally, there needs to be worldwide measures taken to cut down the use of palm oil for non-food uses as it is used in spreads, confections, cosmetics, cleaning products, and biofuel. In 2004, a Roundtable on Sustainable Palm Oil (RSPO) was formed to increase awareness and usage of sustainable palm oil products. [13]

Several companies have started introducing sustainable red palm oil in their product line and there is a small albeit cult following for the product.

If you do want to include virgin palm oil in your daily regimen, make sure you buy one that has been minimally processed to derive the maximum health benefits. Also, like any other oils, this palm oil variety contains saturated fats and should be taken in moderation. [14]