The health benefits of red wine have made it one of the most written about alcoholic beverages in recent years. Several studies have been done on its heart-healthy properties. However, recent research has also revealed that beer contains as many polyphenols as wine and that both, beer and wine, can have potential health benefits when consumed in moderation. 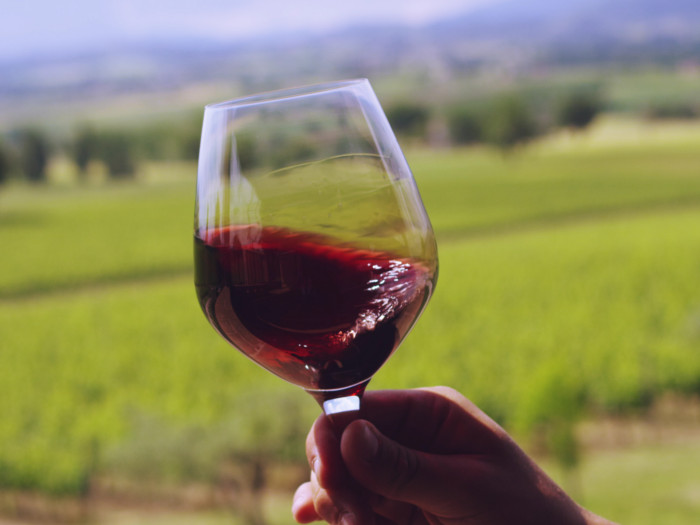 Red wine, in moderation, has long been thought of as heart-healthy. Photo Credit: Shutterstock

You can estimate the average calories in wine as per the amount poured into a glass. According to the USDA, one fluid ounce of red wine is 25 calories. A standard serving of table wine in the US is 5 fluid ounces, with about 12% alcohol content. [1] [2]

A standard serving of red wine (5 fl. oz) contains 125 calories. White wine is only slightly lower in calories, with 121 calories per standard serving. Also, it is important to note that red wine is usually served in a larger wine glass compared to white wine, and the serving poured could be more than 5 fluid ounces. A bottle of wine (750 ml) contains 25.4 ounces of wine, which works out to 5-6 servings of wine and comes to a total of 635 calories. [4] [5]

According to the USDA, a standard serving of red wine contains 3.8 g of carbohydrates. There are no fats or proteins in wine and the estimated glycemic index of wine is zero. [6]

The alcohol content in red wine generally ranges from 12-15 percent. However, some wine varieties like zinfandels and Shiraz wines can have ABVs as high as 18%. Let us look at the ABV in popular reds:

It is important to note that to make sure you are drinking the standard serving, you want to keep a check on the serving size of wines that have a higher ABV.

The potential health benefits of drinking red wine in moderation include its cardioprotective and anti-inflammatory properties. It may also help in improving longevity and promoting healthy gut bacteria.

Many recent studies have reported promising health benefits, especially associated with heart health, with moderate red wine consumption. The cardioprotective effects are mainly due to the polyphenols found in red wine, especially resveratrol in grape skins. These polyphenols reduce platelet aggregation and improve fibrinolysis, thus aiding in the prevention of blood clots. [7] [8]

Furthermore, a 2020 report published in the Nutrients journal reveals that small amounts of alcohol are safe and beneficial for the cardiovascular system. However, these studies are not conclusive and point out to the fact that the risks of alcohol dependency and side effects could far outweigh the benefits. [9] [10]

The American Chemical Society has found that the phenols found in red wine prevent platelet aggregation, thus countering thromboses that can occlude the inner lining of the blood vessels. One study conducted in Europe showed that moderate consumption of wine was linked to a reduced inflammatory response due to its ethanol content. Also, in a large study of women (SWAN), those who drank in moderate amounts (1 glass a day) had significantly lower levels of all hemostatic and inflammatory factors examined compared to abstainers. [11] [12] [13]

Red wine provides a rich source of antioxidants that include flavonoids and polyphenols, such as resveratrol, which studies have shown to be an active element in cancer prevention. A 2007 study revealed that individuals who consumed 13.5 ounces of red wine daily for two weeks significantly increased their antioxidant status and decreased oxidative stress in blood circulation. However, it is not recommended to have more than a standard drink of 5 fluid ounces per day. [14]

What is Organic Red Wine?

Organic red wine could be considered a healthier drink than normal wine as some believe that a considerable portion of antioxidants are destroyed if it is not processed organically. The presence of chemical fertilizers, pesticides, and fungicides present in it, not being organic, robs its goodness. Organic wine bottles are usually also packed in environmentally friendly organic containers. For these reasons, organic wine is a more conscious choice rather than regular wine.

In the context of wines, a mere “Organic” label on the bottle does not certify that it is 100% organic. Organic red wines come in three categories.

Manufacturing Processes of Red Wine: Organic red wine is made from organically grown wine grapes, processed in an organic way, so most of its natural goodness is preserved. In the organic process, the emphasis is laid on the use of wooden presses or similar tools so that a minimum amount of metals get into the wine. Organic red wine also does not use any artificial flavors or colors.

Who is Filling the Casks?

Who Certifies These Wines?

There are certain agencies like the ECOCERT, BIOFRANC, Nature et Progres, Terre et Vie, and others that do this certification. These are guided by USDA and NOP directives.

Organic red wine has received a great response and it seems that people have been waiting for this. However, manufacturers are still doing only a limited production. The reasons for this are numerous. First of all, the production of organic grapes is far less than that of normal grapes. Then, there is the question of preservation and stabilization. Since zero to very small quantities of chemical preservatives are used in organic red wines, they are subsequently less durable. So, the producers are not investing too much in their production.

Although research suggests that moderate wine consumption has potential health benefits, you can also get the same by eating a healthy diet. In other words, if you didn’t drink wine before, you don’t need to start simply for the health benefits. Side effects on drinking excessive red wine include nausea, dehydration, dizziness, slurred speech, as well as blackouts.

According to the Centers for Disease Control and Prevention, people who should not drink alcohol include women who are pregnant, individuals younger than 21 years of age, and people who are recovering from alcoholism or cannot control the amount they drink. Also, it should be avoided by people who are planning to drive or any other activity that required focus and skill. However, different countries have different rules on alcohol purchase and consumption. [20]