Rheumatoid arthritis is a chronic inflammatory condition that affects the movement of joints and causes swelling around the hands and feet. Let us take a detailed look at it below.

What is Rheumatoid Arthritis?

Rheumatoid arthritis (RA) is a common autoimmune disease caused by the immune system attacking the lining of joints, resulting in inflammation and joint pain, cartilage and bone erosion, with progressive joint deformity as per a paper published by Guo Q, et. al. in the Central South University, China. [1]

The joints commonly affected are those of the hands, feet, wrists, elbows, knees, and ankles, and usually in a symmetrical fashion. Other joints that can be affected include the hips, jaw, neck, and shoulders. The bilateral presentation helps to distinguish RA from other types of arthritis condition such as psoriatic arthritis. Rheumatoid arthritis primarily affects adults and its prevalence rate increases with age. Approximately three times more women than men are affected by RA, this difference is thought to be related to genetic differences linked to the female X-chromosome. [2] 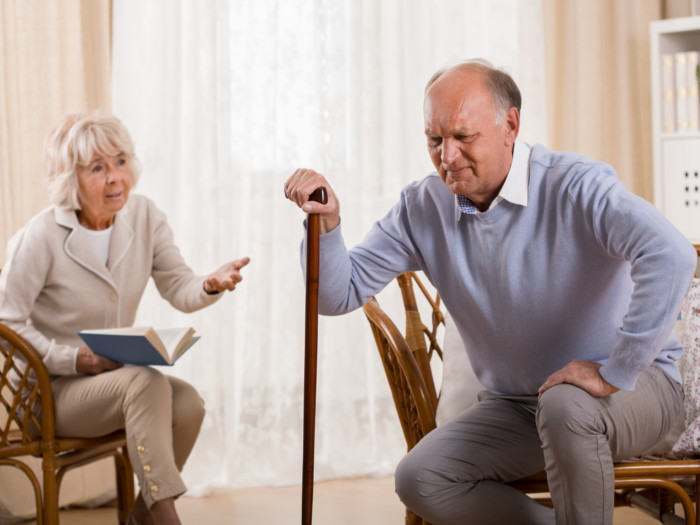 Arthritis can have various symptoms such as pain in the joints, stiffness of the bones, and swelling. Photo Credit: Shutterstock

In addition to joint inflammation and pain, the classical symptoms of RA also include joint swelling and stiffness that is especially common in the morning and can persist for more than thirty minutes. Rheumatoid nodules are symptoms that appear under the skin as non-painful palpable swelling that most often appear in the elbow, but can also appear in other bony areas such as the back of the head or base of the spine according to the Arthritis Foundation. The systemic nature of RA can impact other body systems resulting in fatigue which may be a sign of anemia, muscle aches, poor appetite, malaise, and depression. RA can damage the lining of the lungs, a condition called pleurisy, resulting in shortness of breath. RA can also cause inflammation of the lining around the heart (pericarditis) or inflammation of the heart muscle (myocarditis) that may result in shortness of breath or chest pain. Other systemic effects of RA include increased risk for cardiovascular disease that contributes to poor health outcomes, including increased risk of premature death as per a review performed by Dr. Das from the Department of Pharmacology, Gouridevi Institute of Medical Sciences and Hospital, Durgapur, West Bengal, India. [3] [4]

The classical symptoms of RA can also be present in other diseases and therefore the differential diagnosis of RA is important so that the right treatment can be used. The 2010 American College of Rheumatology (ACR)/European League Against Rheumatism (EULAR) classification criteria for RA is used for its diagnosis, and focus on features that would identify patients at an earlier stage of disease so that treatment can be started earlier in the disease process. The classification criteria assign points according to the degree of joint involvement, duration of symptom, and the presence of specific inflammatory cytokines associated with RA (rheumatoid factor [RF], anti-cyclic citrullinated peptide antibodies, C-reactive protein , and erythrocyte sedimentation rate ). A patient with 6 or more points (out of a maximum of 10) is classified as having RA according to a 2010 research by the Arthritis Research UK, Copeman House, Chesterfield, UK. [5]

The primary goals of treatment of RA are to control inflammation, relieve pain, reduce disability, and slow or stop disease progression and joint destruction. A combination of pharmacological and nonpharmacological management approaches are used, including medications, occupational or physical therapy, and regular exercise. Among the pharmacological agents, nonsteroidal anti-inflammatory drugs (NSAIDs) are effective in reducing joint pain and inflammation, however, they do not slow down the disease progression. Based on RA pathogenic mechanisms, therapies have been developed to target autoantibodies and immune complexes to suppress synovial inflammation and joint destruction.

These disease-modifying antirheumatic drugs (DMARDs), nonbiological and biological, help slow or stop RA progression. Treatment of RA is typically initiated with nonbiological DMARDs, which include methotrexate, hydroxychloroquine, leflunomide, and sulfasalazine. Biologic DMARDs such as tumor necrosis factor inhibitors are used when methotrexate or other nonbiological DMARDs are no longer effective in slowing disease progression. Several biologic DMARDs are now available and guidelines have been published to provide guidance on their optimal use. [6]

In recent years, the role of natural remedies for the management of RA symptoms has gathered momentum. Massage and mindful meditations are mind and body approaches with a demonstrated benefit on relieving the physical symptoms of RA such as pain. The benefits of other approaches such as acupuncture, relaxation techniques, Tai Chi, and yoga, have not been clearly demonstrated.

Dietary supplements are also increasingly used as a natural approach to supplement the treatment of chronic diseases such as RA. According to the National Institute for Health and Care Excellence (NICE), it is important to be cautious about the use of dietary supplement because not all have been demonstrated to be efficacious, others have side effects that may not have been well studied or reported, and still, others may to contraindicated with other treatment a patient may be receiving. It is important that patients diagnosed with RA discuss with their physician before taking any type of dietary supplementation or engaging in mind and body treatment approaches. [7]


Helen Fosam, PhD (Physiology), is a freelance medical writer and owner of The Edge Medical Writing, LLC. She focuses on CME needs assessments, reporting for conferences and advisory board meetings, manuscript and report writing, and pharmaceutical product training materials.

Rate this article
Average rating 3.0 out of 5.0 based on 3 user(s).
Read This Next:
Popular Articles