Drinking rum is often associated with tropical vacations as it forms the base for many popular cocktails flavored with coconut, pineapple, and mangos. Rum can be used in many ways in our daily life, both as alcohol and an ingredient in culinary preparations. Let’s find out more.

Rum is a type of alcohol that is made from byproducts of sugarcane and is primarily produced in the Caribbean, as well as Central America and Mexico, among many others. This gluten-free alcohol is typically sweet and bitter with a burnt taste, and comes in two main types, light and dark, based on the aging process.

Although the exact origins of rum are not known, it has been widely produced in the Caribbean for more than 500 years. It plays an important cultural role in many tropical areas, but it also has an unfortunate part in history, as it was a central element of the slave trade. Over the years as rum became popular worldwide, several regions started making it in their own way. To know more, please visit the Top 11 Types Of Rum. [1] 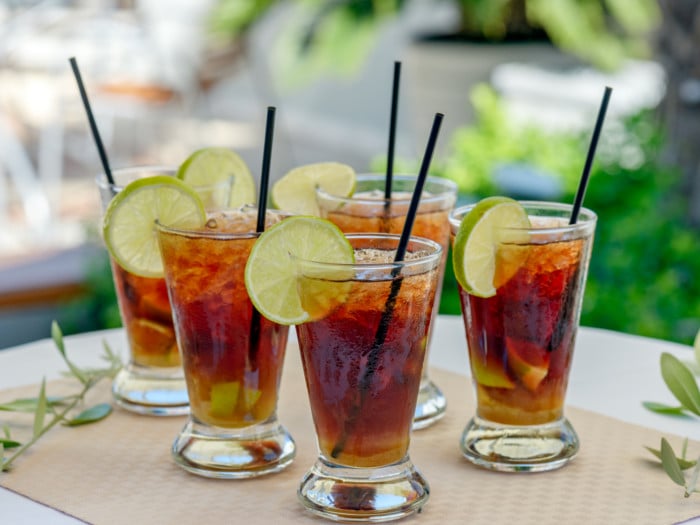 Rum is made by fermenting and then distilling sugarcane molasses or sugarcane juice. Photo Credit: Shutterstock

In terms of nutrition, a 1.5-ounce serving of 80 proof rum contains approximately 100 calories and zero carbs, which is similar to other hard alcohols with the same alcohol content. It also contains minimal amounts of potassium and sodium. Certain varieties come at a higher proof, which also increases their calorie count. [3]

Rum cocktails are usually laden with calories as they are mixed with high saturated fat ingredients like coconut cream or sugary drinks like orange or pineapple juice. For instance, a rum-based Piña colada made with pineapple juice and coconut cream could contain up to 650 calories and even a classic mojito made with just lemon juice, sugar, and rum may contain up to 250 calories. [4] [5]

The alcohol content of rum ranges from 40 to 60 percent; this alcohol is also very popular in tropical cocktails as well as common drinks, such as rum and coke. [6]

The sweet flavor of this alcohol makes it a popular addition to the following:

Most popularly, however, rum is found in cocktails such as Piña coladas and daiquiris.

There are a number of side effects when drinking this beverage, primarily when consumed in excess. These side effects include the following:

Some people also claim to have a higher rate of heartburn and indigestion when consuming this beverage.

Risks associated with alcohol consumption, if done in an excessive manner, include injuries, addiction, alcohol abuse, and chronic diseases. According to the Centers for Disease Control and Prevention, people who should not drink alcohol include women who are pregnant, individuals younger than 21 years of age, and people who are recovering from alcoholism or cannot control the amount they drink. Also, it should be avoided by people who are planning to drive or any other activity that required focus, alertness, and skill. As with any other alcoholic beverage, binge-drinking can increase your chances of liver cancer and cirrhosis. [7]

Rate this article
Average rating 3.8 out of 5.0 based on 152 user(s).
Read This Next:
Popular Articles