Whether you eat it raw in sushi or as smoked salmon, this fish is packed with omega-3 fatty acids, which has lent its reputation as a highly health-supportive food. The health benefits of salmon include sound cardiovascular health, reduced risk of cancer, improved cognition, bone, and joint protection, healthy skin, better vision, and efficient metabolism. Salmon is also known to be a brain food for children and a calming food for those with ADHD.

Salmon is a species of fish which is found both in fresh water (rivers) and saline water (seas), depending on the stage of its development.

They have a peculiar life cycle. The fish lays its eggs near the mouth of rivers, where the eggs hatch, develop into fries and start its journey towards the sea. Salmons grow into an adult fish in the sea and go back to the rivers to reproduce, where most of them die after laying their eggs.

The varieties of this fish are usually identified based on the ocean where they are located. The scientific name of the salmon family is Oncorhynchus in the Pacific, while they belong to the Salmogenus in the Atlantic. There is only one type of Atlantic salmon, and five kinds of Pacific salmon namely, chinook (or king), sockeye (or red), coho (or silver), pink, and chum. Another popular variety is wild Alaskan salmon.

The flesh of the salmon is usually pink but can range between shades of red to orange.

As per the USDA National Nutrient Database, salmon is a well-known and popular fish, which is a very good source of easily digestible proteins (amino acids), and fatty acids like Omega-3 in the form of triglyceride, as well as vitamins like vitamin A, vitamin D and some members of the B vitamin family like choline, pantothenic acid, and biotin. It also contains minerals like selenium, zinc, phosphorus, calcium, and iron. [2] [3]

The health benefits of eating salmon include the following:

Proteins, or accumulations of amino acids, are essential components of our cells, tissues, enzymes, hormones and every other body part. The proteins from salmon and most other fishes are easily digestible and easily absorbed into the body. They don’t have any adverse side effects, nor do they contain carcinogenic compounds as some other meats do. [4] [5]

Salmon is also a source of “good” cholesterol (omega-3 fatty acids) which also plays a vital role in keeping you healthy. A 2012 examination of 16 controlled studies found that consuming 0.45–4.5 grams of omega-3 fatty acids per day led to notable improvements in arterial function. Salmon is also rich in some essential minerals like iron, calcium, selenium, and phosphorus, as well as vitamins like A, B, and D. Selenium, which is necessary for the metabolism of tissues, hair, and nails, is best obtained from animal proteins. Among animals, salmon is one of the best sources for this trace element. [6] 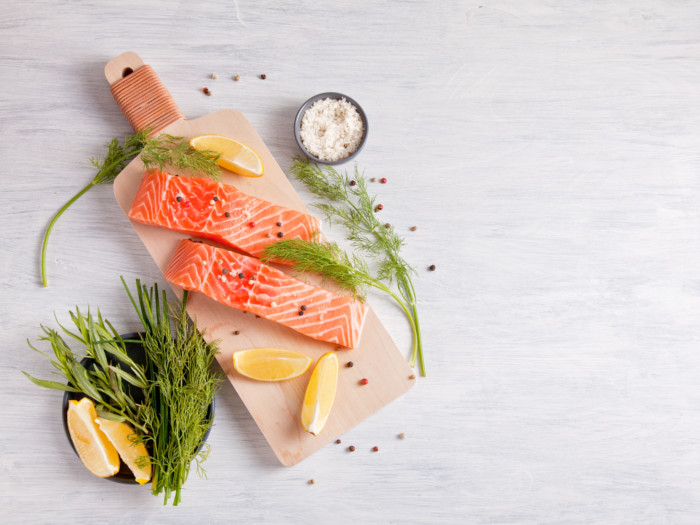 Salmon has a powerful combination of polyunsaturated fatty acids along with vitamin D, both of which are linked to reduced risk of osteoarthritis. Researchers at Ohio State University found that women who consumed a diet rich in omega-3 fatty acids had lesser hip fractures. This is because omega-3s are a natural anti-inflammatory food, and they reduce the incidence of bone resorption due to inflammation. [7]

Protects the Brain and Nerves

Dr. Simon Dyall, Faculty of Health and Social Sciences, Bournemouth University, UK, published a report in Frontiers in Aging Neuroscience that stated that the omega-3 fatty acids increase the efficiency of brain functions, improves memory and keep it active during long working hours. Along with the amino acids, vitamin A, vitamin D, choline, and selenium, these fatty acids protect the nervous system from damage related to aging, acts as an antidepressant, relaxes the brain, and helps in treating Parkinson’s disease. [8]

While the omega-3 fatty acids help reduce cholesterol, maintain flexibility of arteries and veins and strengthen cardiac muscles, the essential amino acids repair damages to the cardiovascular tissues. They help reduce the blood pressure as well, by lowering cholesterol levels and preventing the hardening of artery walls. This considerably reduces the chances of heart attacks. [9]

Just like in adults, salmon offers the same brain benefits to children. A study published in the Paediatrics Child Health show that the omega-3 fatty acids can improve academic performance while preventing ADHD symptoms. [10] [11]

Owing to high concentrations of omega-3 fatty acids, salmon can reduce inflammation, reduce pore clogging, and erase fine lines and wrinkles. The carotenoid astaxanthin has antioxidant that can reverse the free radical damage, which causes aging. The same antioxidant is also very effective in cases of atopic dermatitis. [12]

Dr. Dominik H Pesta, Department of Internal Medicine, Yale University School of Medicine, New Haven, Connecticut USA, The fish is the right meal choice for those who wish to lose weight and keep it off because of its high protein content, which regulates hormones that control appetite and makes you feel satiated. High-protein foods also increase your metabolic rate. Being low in calories, salmon has polyunsaturated fats that are also known to promote weight loss and target belly fat. [13] [14]

The omega-3 fatty acids, vitamin D and selenium within salmon all combine to help manage insulin levels throughout the body, thereby facilitating the absorption of sugar and the subsequent lowering of blood sugar levels.

Scientists believe that inflammation is at the root of most chronic illnesses. Omega-3 fatty acids reduce inflammation of the arteries and the digestive system, reduce chances of colon, prostate, and kidney cancers. A 2012 study published in the Nutrition Journal of Medicine have found that these fatty fish reduced the development of inflammatory markers TNF-a and IL-6 (35). [15] [16]

According to a research report published by Dr. Jeffrey A Foran, Dr. David H Good et al, in the Journal of Nutrition, salmon is considered a cancer superfood due to its high omega-3 content, which has anti-cancer potential. Besides, salmon is also known to contain selenium, which according to a few researchers from the United States Department of Agriculture, played an active role in antioxidant protection, enhanced immune surveillance and modulation of cell proliferation, besides reducing the risk of cancers. [17]

Researchers at the John Hopkins University, Baltimore, Maryland, published a study in the Ophthalmology Journal that the omega-3 fatty acids and amino acids in fishes like salmon help prevent macular degeneration, retinal dryness, loss of vision and fatigue of the eyes. It is a proven fact that people who eat fish regularly, or at least more than others, have better vision than those who don’t. [18]

The fatter the salmon, the more nutritious and healthy it is. It is a good protein supplement for older or sick people as well since it is easy to digest. In some parts of the world, it is cheaper than other sources of animal proteins like red meat and poultry.

Side Effects of Salmon

Mercury poisoning: There are two types of salmon available, wild or farm-raised. Wild salmon is caught in natural water bodies like rivers, lakes, and oceans. Fish farms make up a large part of the salmon sold for consumption worldwide. Studies show that farmed salmon has greater levels of contaminants like polychlorinated biphenyls (PCBs), dioxins, mercury, and several chlorinated pesticides. Also, persistent organic pollutants, present in Atlantic farmed salmon, have been strongly linked to the development of diabetes, insulin resistance, and metabolic syndrome, according to a 2011 report published in the Alternative Medicine Review. Make sure to purchase quality farm-raised salmon, and it should be safe to consume it 5 a week. [19] [20]

Women, who are pregnant or nursing, should keep monitoring their salmon consumption as methylmercury, a toxic form of mercury can have a negative impact on the baby’s developing brain and nervous system.

Tapeworm infection: It’s not safe to eat raw salmon which has brought from the fishmonger or the supermarket. Raw salmon and salmon sashimi are not the same as the sushi-grade fish are kept ‘super frozen’ at minus 40 degrees C. Raw salmon may contain parasitic tapeworms called Diphyllobothrium latum, which can cause:

To avoid this, make sure that you cook the fish thoroughly at its thickest point, cooking for 10 minutes for every inch.

So go ahead and enjoy your salmon baked, grilled, or pan-seared without any guilt!

Rate this article
Average rating 4.2 out of 5.0 based on 70 user(s).
Read This Next:
Popular Articles