What Are Serrano Peppers

Serrano peppers are a popular and delicious addition to many different meals, but before popping these into your pan, it’s best to understand the benefits it can provide!

What are Serrano Peppers?

Serrano peppers scientifically known as Capsicum annuum are one of the many types of chili pepper. They also include sports pepper and chili seco. Native to mountainous regions of Mexico, they are very commonly found in cuisine from that region, as they are flavorful peppers that are slightly hotter than jalapeño peppers, making them very versatile. These peppers are green when they develop, but can change color upon maturity, ending as red, orange, brown, yellow or green. A pepper’s heat is measured by the Scoville scale, and serranos have a rating between 10,000 and 20,000, whereas jalapeños range from 2,500 – 5,000. [1] 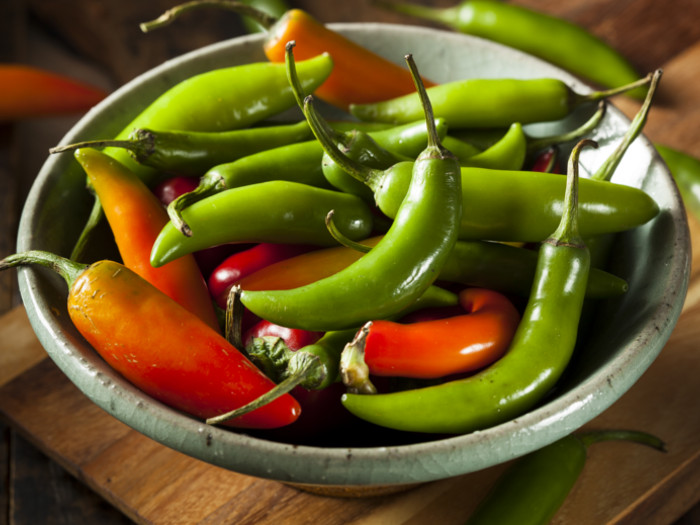 Nutritionally speaking, serrano peppers contain vitamin A, B6, and vitamin C, as well as moderate amounts of iron and magnesium. These peppers have less than 35 calories in a 100-gram serving, and a good amount of dietary fiber, as well as powerful antioxidant active ingredients, namely capsaicin. [3]

There are a number of benefits to adding these peppers into your diet, such as the following:

While people think of hot peppers as spicy and inflammatory, they are actually just the opposite. The active ingredients in chili peppers can have many anti-inflammatory effects on the body. With the iron and magnesium content, they can also improve hormonal levels. [5] [6]

To store excess serrano peppers, dry them thoroughly and then place them in a plastic or paper bag, separated by paper towels. Place them in airtight plastic containers if you want to freeze your peppers.

Rate this article
Average rating 3.8 out of 5.0 based on 2 user(s).
Read This Next:
Popular Articles