Smoking kratom is a controversial practice, both because of its potential side effects and debate over its efficacy as a recreational drug.

There have increasing reports of drug dependency and drug abuse associated with kratom use in the US and Europe. Due to its potential abuse, kratom is illegal to use in Malaysia, Thailand, Australia, and Myanmar. New Zealand controls kratom under its Medicines Amendment Regulations. While it is legal in the US, the Drug Enforcement Administration (DEA) in the US has listed kratom as a “drug of concern”. The USFDA has also issued public health advisories involving kratom use and marketing, saying that it may expose users to health risks. To know more about kratom leaves, you can read Kratom Leaves: Uses Vs Risks. [1] [2] [3] [4]

Kratom is the generic name given to products made from the kratom plant, scientifically known as Mitragyna [5] speciosa. Kratom generally refers to kratom leaves but could also be kratom powder, capsules, or kratom extract. According to the European Monitoring Center for Drugs and Drug Addiction (EMCDDA), the crushed or powdered dried leaves, that are light to dark green in color, are sold as is or as powder. The powder can range from bright green to beige-brown in color and is sometimes fortified with extracts from other leaves. It can also be supplied as a paste-like extract, a dark brown kratom resin, or as tinctures and capsules. [6] [7]

Kratom leaves have been used in traditional medicine, and for recreational purposes, for more than 200 years, if not longer. The leaves also have stimulant and opioid properties when smoked (in large quantities) or when chewed. There are some claims about the therapeutic value of consuming kratom leaves in various forms, but formal research results are still lacking. [8] 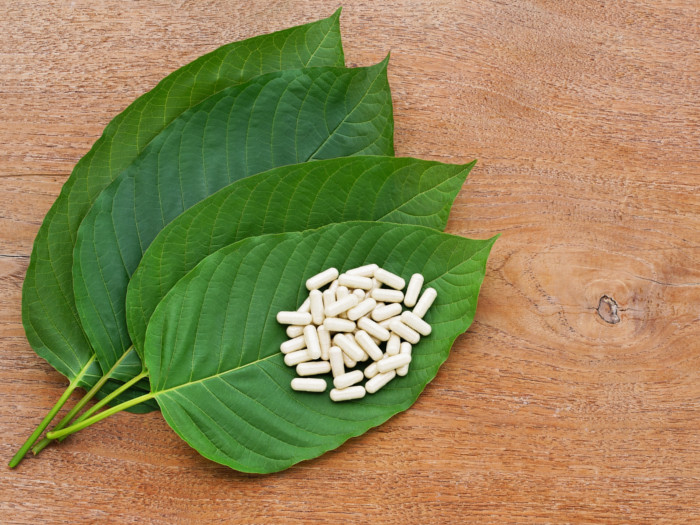 Kratom is sold as dried leaves or as pills. Photo Credit: Shutterstock

Can You Smoke Kratom?

In certain cultures, smoking kratom leaves is popular, as there are some stimulant effects, similar to smoking cigarettes, as well as opioid-like effects, which are compared to smoking marijuana. However, there is a lot of debate about this use of the leaves due to the volume of leaves one needs to smoke to generate these effects. The EMCDDA states that a few grams of dried leaves can cause an invigorating effect, including euphoria, within 10 minutes. This effect can last for one to one and a half hours. [9]

Traditionally, chewing the leaves was considered a far more effective way of benefiting from this herb. Anecdotal evidence says that orally consuming only a few leaves can have the same stimulant effects as smoking dozens of leaves.

Smoking kratom is an inefficient use of the plant, but there are some effects of smoking, both positive and negative, such as relieving opiate addiction, damaging the lungs, and increasing cancer risk.

Anecdotal evidence shows that smoking kratom leaves can be an effective means of dealing with opiate addiction, as the small amount of opioid-like compounds that are absorbed while smoking can help to ease cravings and withdrawal symptoms. However, there have been case reports of side effects such as seizures due to drug interactions due to kratom use. [11] [12]

Since such a large amount of kratom must be smoked to generate the desired effects, it will wreak havoc on the health of the lungs, just as smoking cigarettes can do. [13]

May Increase Risk of Cancer

The leaves of the kratom plant have very high tar content, and smoking those leaves will release that tar directly into the lungs, which can increase your risk of cancer in the same way that smoking cigarette might. [14]

There are some active alkaloids in kratom leaves, namely hydroxy mitragynine, mitragynine, and mitraphylline. When you smoke these leaves, you will end up neutralizing or denaturing many of these alkaloids, rendering them useless, whereas brewing them into kratom tea may be beneficial. This is according to anecdotal evidence as there has been limited research on kratom usage and its effects on humans. [15]

Rate this article
Average rating 4.1 out of 5.0 based on 50 user(s).
Read This Next:
Popular Articles