Side Effects of Smoking While Pregnant

Smoking during pregnancy is considered harmful for both the mother and the child. However, pregnancy may be an extremely stressful time, which can be a major trigger for many smokers. It can often seem like pregnancy is a massive shift in your life, requiring a new perspective and a re-prioritization of your entire existence.

There are many reasons to quit smoking, both for the health of the mother and baby, but addiction can be very hard to conquer. Nicotine is an extremely addictive substance, but there are ways to quit smoking if you are serious about getting healthy. It is important to note that many doctors and experts believe that smoking is the leading cause of adverse effects on the health of a newborn. [1]

If you are an expecting mother and are finding it difficult to give up your guilty pleasure, understanding the effects it can have on your unborn child, as well as some helpful guidelines for quitting, may help you make a firm decision to give up this deadly habit.

The idea of smoking while pregnant may seem incredibly irresponsible to some people, but anyone who has quit smoking (or tried to) in the past knows that it can be easier said than done. There are also those who argue that smoking less or smoking at certain points in the pregnancy is more acceptable or safer. There is some truth to that, as the part of your pregnancy may affect the severity of the impact of smoking, but the bottom line is that there is no safe time during your pregnancy to smoke, regardless of which trimester you’re in. 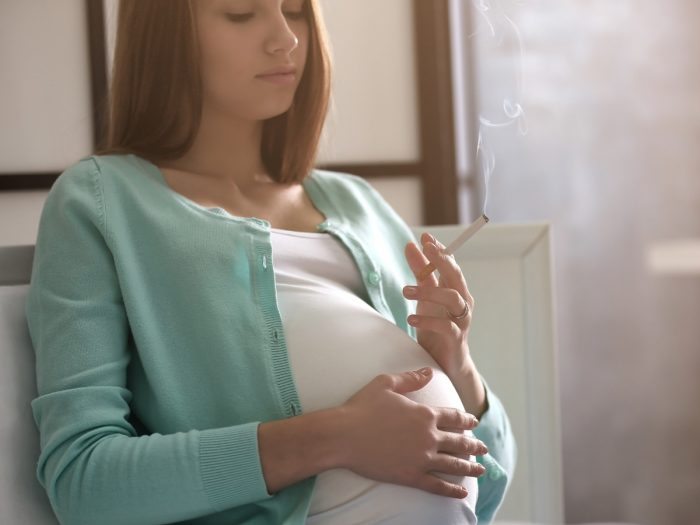 According to the CDC, smoking during pregnancy increases the risk of health problems for developing babies. Photo Credit: Shutterstock

If you are trying to get pregnant, quitting smoking may not seem like your highest priority. However, smoking has been directly linked to reducing fertility and increasing overall toxin and carcinogen levels in your body. The healthier you are, the more likely you are to successfully conceive, and cigarettes work to lower your overall health a bit more with each one you smoke. [2]

Research has shown that women who quit in the first trimester of their pregnancy tend to have the same risk of birth defects as a woman who doesn’t smoke. However, this doesn’t mean that cigarettes are harmless in the first trimester. They can still impact maternal blood pressure, and increase your risk of gestational hypertension and preeclampsia. There is no “safe” time to smoke during pregnancy. [3]

For women who can’t kick the habit and are still smoking in the third trimester, they are significantly increasing the risk of birth defects, low birth weight, incomplete development of organs, and cognitive problems, among many others. This is where some of the fine-tuning of the body occur, in those last few months, so exposing your fetus to high levels of carbon monoxide and nicotine can be disastrous. [4]

Regular smokers who quit during pregnancy have a 50% chance of returning to their old habits after delivery. However, the risks of second-hand smoke on your child are very real, as is the transfer of small carcinogenic substances from your skin, and the fibers on your clothes and furniture. You should expose your baby to a few instances of smoking as possible, considering they are still developing in crucial ways. [5]

Effects of Smoking on Mother & Baby

There are many negative health effects of smoking on both mothers and their children, such as an increased risk of premature birth, miscarriage, and placental abruption, as well as a higher likelihood of birth defects and Sudden Infant Death Syndrome (SIDS), among others.

Miscarriage – The risk of miscarriage is much higher in women who smoke during pregnancy, as this habit can impede proper hormonal function and increase oxidative stress throughout the body. [6]

Preterm Birth – Due to an insufficient amount of oxygen or nutrients being delivered to the fetus, smoking can lead to low birth weight, or force a premature birth, which can lead to many other complications for your child. [7]

Birth Defects – Research has linked certain birth defects, such as cleft palates and cleft lips, to smoking over the course of the pregnancy. [8]

SIDS – One of the most traumatic experiences for a parent is a child who experiences SIDS, and the risk is greatly increased if you smoke during your last two trimesters of pregnancy. [9]

Cancer Risk – For the mother, smoking will also negatively impact her long-term health. As with any smoker, cigarettes will increase your risk of lung cancer, among others, while also increasing your toxicity levels and reducing the strength of your immune system. Furthermore, it will impact your physical fitness and ability to keep up with the demands of child-rearing. [10] [11]

High Blood Pressure – Hypertension is a natural effect of smoking while pregnant, and for the mother, it puts an additional strain on the body, which is already working in overdrive to provide nutrients to a growing fetus. High blood pressure also increases your risk of atherosclerosis, heart attack, and stroke. [12]

Brain Function – Reducing the amount of oxygen that your infant receives while developing can have a major impact on brain development and cognitive abilities. Learning disabilities and other neurological disorders are much more likely for children born to mothers who smoked while pregnant. [13]

When Should You Stop Smoking When Pregnant?

The short answer is, immediately. If you just discovered that you were pregnant, you should quit as soon as possible, and as aggressively as possible. If you aren’t pregnant but are thinking about having a baby, work hard to quit before you try to get pregnant. If you are pregnant but don’t smoke, avoid areas where you are exposed to smoke, as third-hand smoke (the smoke babies experience when their mothers inhale second-hand smoke) can also be damaging to a baby’s growth and development.

As mentioned above, there is no safe period of time for smoking while pregnant, and even if you’re not pregnant, your long-term health depends on kicking the habit for good!