A Beginner’s Guide To Sourdough Bread

The sourdough bread is often seen as the Holy Grail of bread making. I know bakers who will not take you seriously till you’ve made at least one of these lovely crusty loaves. Committed bakers will treasure their bubbling starter dearer than life, carefully nurturing it year on year. It is no wonder then that sourdough bread is suddenly trending again. You only need a bite of this wonderfully unique bread to understand why it is so popular and why it’s a love that stays for life.

What Is Sourdough Bread?

Sourdough bread is believed to be one of the oldest baked bread. It is made by the fermentation of dough using wild yeast which is present all around us. In Flour and Breads, the author calls it a primordial form of bread leavening. Some people believe that it originated in Egypt in 3000 BC,  spreading from there to Ancient Greece and then to the Roman Empire. The production of sourdough bread started waning after the discovery of other more reliable forms of yeast that did not need the long fermentation process. Industrial bread making which used commercial yeast finally replaced it with the ready-packaged breads that we find today. [1]

And yet, the popularity of sourdough bread refuses to die. There are artisanal bakeries that have treasured their sourdough starter for decades. What makes it unique is the absence of yeast. Instead, it uses a live culture, known as a sourdough starter, as a leavening agent. It also gives this crusty loaf its characteristic complex flavor. Despite the name, it’s not sour. Rather it has that perfect tanginess that can range from mild to sharp. It’s a lovely complex flavor that can carry anything, from the comfort of a buttered toast to the lavishness of cream cheese topped with bacon. 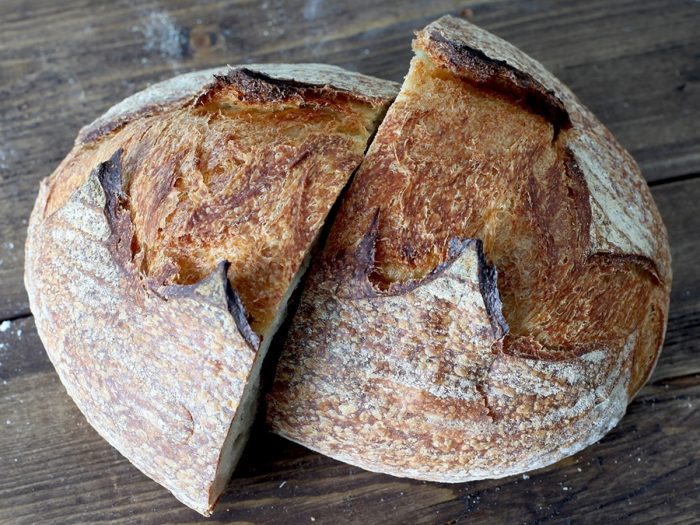 How to Make Sourdough Bread?

Despite its reputation, sourdough bread is quite easy to make. The trick lies in letting it hydrate. This is why we let the dough rest twice. As with any other bread, you will get better with practice. I have discovered that making sourdough bread is the end where you may have an occasional pitfall, but it’s the journey that matters. Along the way, you will develop an instinct for the flour and how it behaves.

A note about ingredients and equipment:

Sourdough starter: For many people, this is the real star of the show, the ingredient that gives sourdough bread its character and magic. You can make a sourdough starter from scratch by following our recipe here. Alternatively, you can also check with your local bakery if they can give you some. Many artisanal bakeries also sell the starter online.

Flour: Bakers usually prefer bread flour because of its high protein and gluten content. Many people prefer whole-grain flours because these are healthier and contain more minerals. These flours will also give your bread a nice rise. Avoid bleached flours with chemical additives.

Water: Tap water works fine when making the dough. But in case your tap water has a high quantity of chlorine or other chemicals, it is best to stick to filtered or purified water.

Salt: It isn’t one of the main ingredients and not one you will even think of, but it is pretty important in the flavoring of the bread. It also acts as a preservative. A sourdough bread needs slightly more salt than usual.

Proofing basket: The proofing basket gives the dough its distinct spiral lines. No, you don’t have to splurge and buy a proofing basket. The mixing bowl will do just as well for letting your dough rest. But if you are a keen baker and see yourself doing this for the long-term, you may want to buy these distinct baskets.

The pot: Bread needs steam during baking. Without it, the crust will form too soon and you will get a heavy and dense loaf. This is why a sourdough bread should be baked in a pot. You can use a deep casserole dish, a loaf pan, or the dutch oven. The latter is usually the pot of choice because it traps the moisture.

You may need more water while kneading if you are using whole grain flour, about 300-325 ml in all. Use a liberally floured cloth-lined bowl instead of the dutch oven for the second rise. Make sure that it is very liberally floured.

A common misconception about sourdough bread is that it is gluten-free or at the very least safer than commercially available yeast bread for people with gluten intolerance. A 2010 research published in the Journal of Pediatric Gastroenterology and Nutrition found that sourdough wheat-baked goods, where the gluten is completely degraded, are not as toxic for people with celiac disease. However, this claim has since been contradicted by several authorities, including subsequent research. The website Gluten Free Watchdog tested three sourdough bread brands and found that it was not safe for people with celiac disease. [4] [5] [6]