Soy sauce is a staple ingredient in various cuisines. It is very commonly used in professional and home kitchens, mainly though in Asian meals as it has a sweet umami taste. But what if you are cooking a dish at home, and you suddenly find yourself out of this main ingredient? Well, there is no need to panic as we bring you a list of best soy sauce substitutes out there.

There are many reasons why you may want to go for a soy sauce substitute, such as a soy allergy, gluten intolerance or celiac disease, or because of the high level of sodium in it. Sometimes it can also be because of the unavailability of soy sauce at home or at your nearest grocery store. The best soy sauce substitutes include coconut amino sauce, fish sauce, liquid amino, Worcestershire sauce and more. We discuss them in detail below.

Coconut amino makes for popular soy and gluten-free vegan sauce, made from the fermented sap of coconut palm and sea salt. It has a salty and sugary taste to it and is of a light color, similar to that of light soy sauce, making it a good substitute in recipes. As per the USDA Food DataCentral, c [1]oconut amino sauce contains 130 mg of sodium in a five-milliliter or one teaspoon serving, which is less than that of soy sauce. It is also a good source of energy. The only drawback to this alternative is that it is not very easily available and is quite expensive too. The best selling coconut amino sauce comes from the brand Coconut Secret, however, it has a slightly sweeter taste. 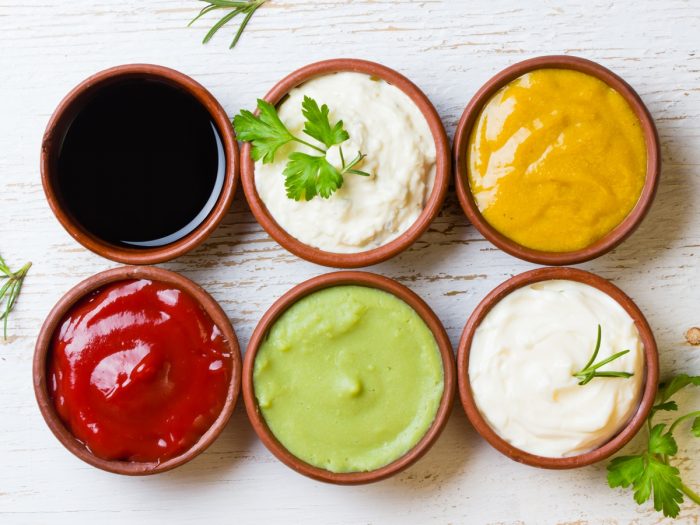 Fish sauce is gluten and soy-free substitute for soy sauce that enhances the flavor of your food. The most commonly sold fish sauce is the Red Boat fish sauce, which originates from Thailand. However, some people do complain about the taste of the resultant recipe made from this sauce being a little salty and fishy. Also, keep in mind that sodium levels in this sauce are much higher than those found in soy sauce, as per the USDA. [2]

The best way to use Worcestershire sauce as a substitute for soy sauce is by mixing it with water. According to various recipe experts, three tablespoons of this sauce should be mixed with one tablespoon of water. This concoction will be equivalent to a one-fourth cup of soy sauce. You may want to adjust the ratio as per your requirements. When you are preparing a recipe with this sauce, it might be a little different as Worcestershire contains onions, chili peppers, garlic, and vinegar.

However, keep in mind that this sauce also contains soy in it, so those who are trying to avoid soy for health or allergy-related reasons, this might not be the best choice. Lea and Perrins’ sauce is one of the best selling Worcestershire sauce available and you can use it for seasoning on stir-fried vegetables and popcorn. [4]

This sauce comes from Japan and is the closest in taste to soy sauce. It is made with sea salt, sake, and wheat and has a thick texture to it. With its golden honey color, fruity smell, and sweet taste, this sauce covers well for soy sauce in recipes. You need to use equal amounts of tamari sauce to replace soy sauce. Oshawa White Nama Shoyu, which is one of the best in this category, is also known as Golden tamari due to its color, and even though its name contains ‘shoyu’, which translates to ‘soy’, it is soy-free.

A popular in the food circles, liquid aminos can be used in various recipes as an alternative to soy sauce. This substitute, however, contains soy and is therefore not suggested for those trying to avoid soy sauce for allergy reasons. Due to its concentrated flavor, it should be used in lesser quantities in dishes, as compared to soy sauce. Bragg Liquid Aminos is one of the most popular liquid amino available in the market. [5]

Red Boat is an all-natural, cold-pressed, “extra virgin” Vietnamese fish sauce. It is free of added water, preservatives, or MSG. Produced from a two-hundred-year-old, artisanal process, this sauce uses only the freshest ca com (black anchovy). These anchovies are salted minutes after leaving the sea then slow aged for over a year in traditional wooden barrels. Red Boat anchovies are exclusively sourced from crystal clear waters off the Phu Quoc Island water body.

Red Boat Premium Fish has a bit of saltiness and a delightful umami flavor as it is traditionally used in Asian cuisine. A dash of this sauce adds a lot of depth and richness without any of the bad stuff – it is free of cholesterol, trans fat, carbohydrates, and sugar.

You can also pick up your own ingredients and make a good soy sauce alternative. For the time being, though, the above-mentioned soy sauce substitutes should do. Happy cooking!