Soy sauce is a staple of Chinese cuisine and has been in use since the last 2200 years. Prepared from fermented soybeans and wheat, soy sauce is the most popular soy product worldwide. The preparation process of the sauce can cause slight variations in its flavor, texture, and even health benefits and risks. In this article, we understand what is soy sauce, its types, nutrition, calories, benefits and more!

What is Soy Sauce?

Soy sauce, also known as soya sauce, is a liquid condiment, made from a preparation of soybean paste, roasted grain, brine, and koji. The word ‘soy’ comes from the Japanese word for soy, ‘shoyu’. Its taste is predominantly salty, followed by a moderate umami sweet taste, landing onto slight bitterness, as per a detailed paper published in the Soyinfo Center  [1]in 2012.

There are two ways to produce this condiment, either by the traditional way of fermentation or through the chemical method of acid hydrolyzation. The fermentation method can take up to six months, giving it a delicate flavor and sweet aroma. The chemical method, on the other hand, is much faster as it involves the process of artificially breaking down soy proteins by hydrolysis. It only takes two days for completion.

Today, soya sauce is widely used and prepared around the globe from Japan and Korea to Europe and USA. According to the book ‘The Middle Kingdom‘ by Samuel Well Williams, soy sauce is prepared by skinning the beans, grinding them into flour, and then mixing the flour with water and turmeric. [2] 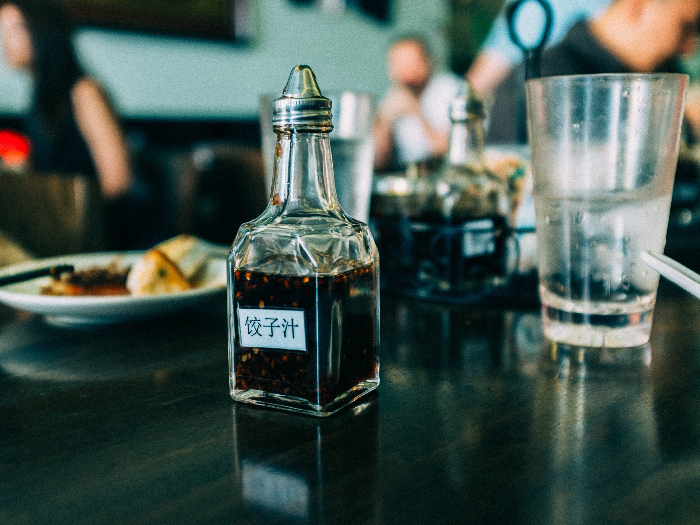 Soy sauce is known for its umami flavor, which makes it an ideal all-purpose seasoning. Photo Credit: Unsplash

There are mainly three different types of soy sauce, light, dark, and thick. Let’s take a look at them. [3]

There are also a few other varieties of soya sauce, including Shiro and Saishikomi. Shiro is made mostly with wheat and contains only a few soybeans. Saishikomi, on the other hand, is made by breaking down wheat and soybeans with enzymes in soy sauce instead of saltwater. While the former is lighter in taste, the latter is heavier.

Soy sauce has a particularly long shelf life, as long as the bottle is not opened – research suggests it stays for up to 3 years. Once you open the bottle, it’s best to consume soya sauce within a year or two at max, considering how long it was stored unopened. The long shelf life is given to the fact that this sauce contains a lot of sodium, making it quite a difficult environment for any microorganism to grow.

According to the USDA Nutrient Database [6], soy sauce, made from soy and wheat, is a good source of water, energy, and proteins. It is also rich in various minerals including calcium, iron, magnesium, phosphorus, potassium, sodium, and zinc. In vitamins, it supplies your body with small amounts of niacin, thiamin, riboflavin, vitamin B-6, and folate. Studies also report soy sauce having some carbs and total sugars.

A frequently asked question about this sauce is regarding its calories. To answer that, one tablespoon or six grams of soya sauce or shoyu contains around nine calories, qualifying it as a low-calorie food, ideally, safe to consume for those trying to lose weight. However, the high sodium content of this sauce makes it a little risky for those suffering from hypertension.

According to a study published in the Journal of Bioscience and Bioengineering, there are some benefits to soya sauce, given to its rich nutrition content. [7]

Having discussed the health benefits, it is important to know that more evidence is still required. This comes from the fact that most of the research on soya sauce has been a result of animal-based studies and not human-based studies.

Soy sauce is mostly safe to consume, however, in some cases, it can have a few side effects. These side effects are linked with the nutrition content of this sauce; they can be because of its high sodium levels or the presence of MSG in it. Let’s look at the health risks associated with soy sauce below.

It can also give rise to certain side effects in those who have a gluten or wheat allergy, therefore, precaution is advised. It is always best to first consult your doctor before making soy or any other product a daily part of your diet. Moderation is advised while consumption.