For yoga practitioners, surya namaskar is a well-known part of their practice, but it can have benefits for other people who practice it too!

What is Surya Namaskar?

Surya namaskar is commonly known as a sun salutation and is a warm-up routine before a session of yogic practice. The reference to the sun in these salutations comes from one of the philosophies of yoga, in which the sun is the source of all power and is closely connected to our individual souls. This particular yoga warm-up is designed to pay respect and homage to the sun, the giver of life. There is no precise definition of what this series of asanas (controlled movements and positions in yogi practice) look like, although there are some varieties. Most yogis design their own series of positions and asanas as a personalized surya namaskar. 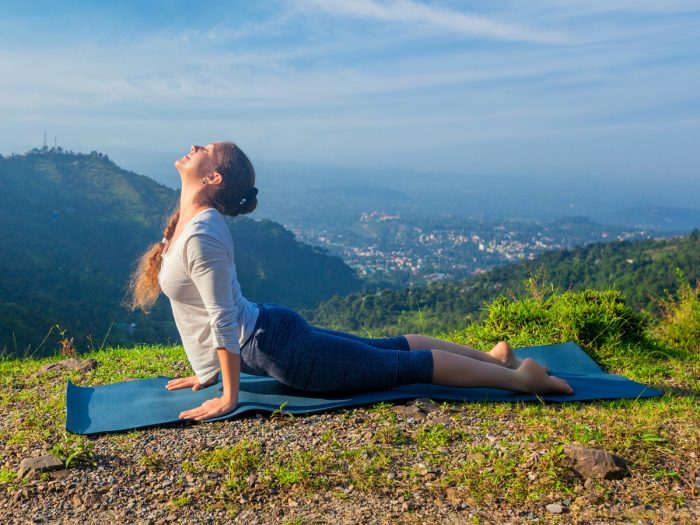 How to Do Surya Namaskar?

A surya namaskar is intended to open up the solar plexus, the part of the body traditionally linked to the sun. Most yogis will perform one of these salutations each day, although some will open every session of their yoga practice with a sun salutation, even if it is in the evening. As mentioned, some have their own surya namaskar, but a common series of poses is as follows;

Beginning your day or workout with this warm-up will help get your blood flowing to the extremities, ensuring that you have enough oxygen in all of your organs and muscle groups. This can increase overall energy levels, and provide a healthy boost to your morning. [1]

By stimulating the metabolism first thing in the morning, you can help kickstart your body into burning calories and fat passively throughout the day. If you do a sun salutation before a yoga practice session, it will prepare your body and metabolism for the exercise to come; you will likely see a change in your weight based on adding this to your daily routine. [2]

Research has found that performing sun salutations can help regulate menstrual cycles, particularly in women who have irregular periods. By helping to regulate menstruation, surya namaskar can improve mood and allow you to take back control of your life. [3]

By lowering stress levels and improving circulation, this morning practice can help boost your complexion and protect against breakouts and inflammation on the skin. [4]

Perhaps best known for its effects on mental health, it builds focus and concentration and prevents memory loss. Also, beginning each day with a centering, relaxing, and healthy sun salutation can help lower stress hormones and prevent chronic inflammation and diseases that can often follow. [5]

It is reported that people who regularly practice surya namaskar have improved hair health, likely due to the boost in circulation, which means more nutrients and oxygen to the scalp. [6]

Using this morning warm-up can help regulate your posture all day. Many people struggle to maintain a healthy posture, which can have long-term negative effects, which include poor circulation, arthritis, and respiratory problems. By concentrating on posture first thing in the morning, you can be proactive about it for the rest of the day. [7]