TDAP During Pregnancy: Risks & Side Effects

There is a lot of debate about getting TDAP during pregnancy, as it is a powerful vaccine that can noticeably change the body’s chemistry and even be passed along to your infant. However, it is also one of only two commonly recommended vaccines to get during pregnancy, as it can have a number of important benefits for both mother and child. Before getting this vaccine booster, it is best to understand the purpose of the shot, any potential risks, and specific side effects that you may experience.

TDAP stands for Tetanus, Diphtheria and Pertussis, the three health conditions that the vaccine can prevent when administered. This vaccine is considered a booster shot for the mother and is intentionally recommended during pregnancy because some of the antibodies can, therefore, be passed onto the unborn child. In the first two months of a child’s life, their immune system is particularly susceptible to certain viral and bacterial infections. By getting this vaccine during your pregnancy, you can fill in this gap of vulnerability in your child’s life, preventing them from developing those conditions, specifically pertussis. [1]

Also known as whooping cough, pertussis poses a high risk to newborn infants, and can often be fatal to children in their first year of life. While many adults have been vaccinated against this illness, the immunity can diminish over time, and there are still hundreds of thousands of cases of this condition every single year. By ensuring that your unborn child has been vaccinated – in addition to all your family members who will come in close contact with your baby – you can protect your child from this potentially fatal infection. Roughly 10 infants die from whooping cough each year in the United States alone, and hundreds more are hospitalized. [2] 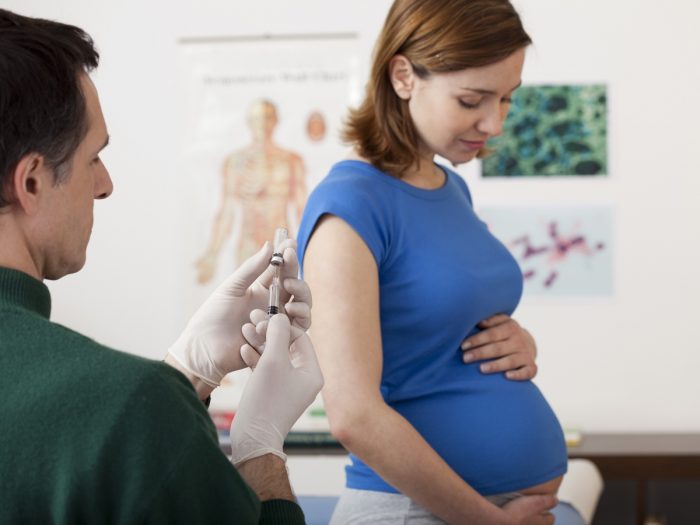 A Tdap vaccine is very safe for pregnant women and their babies, according to the CDC. Photo Credit: Shutterstock

Experts agree that this vaccine should be administered during the third trimester of your pregnancy, as the majority of the fetal development has already occurred, and the baby is primarily gaining weight. The chances of negative side effects caused by the vaccine are even more minimal in the third trimester – although they are also quite low during the rest of the pregnancy. [3]

It is important to note that women should get a TDAP booster during each of their pregnancies if they want to pass along the antibodies to each child. Women with larger families are often concerned about any additional risks of multiple boosters, but there is no evidence that getting an average of one booster shot per year has any negative consequences. There are no live bacteria in the TDAP vaccine, so it is not possible to be infected with whooping cough as a result of vaccination. [4]

Risks of TDAP During Pregnancy

Most experts and doctors agree that getting TDAP during pregnancy is perfectly safe for both the mother and child and there are no known risks. In fact, similar vaccines to TDAP have been administered for the better part of 5 decades, with a very low incidence of negative side effects or serious risks. [5]

As mentioned above, the far more serious risk is leaving your child exposed to this infection in their first two months of life, before they can get their own DTaP vaccine. This vaccine is administered for children between 2 months and 6 years of age. Getting this vaccine after you are born actually increases your chances of serious side effects, rather than having the antibodies be passed to the child during pregnancy. [6]

Side Effects of TDAP During Pregnancy

The side effects of TDAP during pregnancy affect the mother, despite what other people claim about the safety of this vaccine for the fetus. Some of the most common side effects include headaches, body aches, fatigue and soreness, redness or swelling at the site of the vaccination. As many of you know, these are rather common side effects for any vaccine, regardless of whether you are pregnant.

Adults’ bodies are also more able to handle the vaccine than young children, where the side effects can be much more severe. If you wait to have the DTaP vaccine after your child’s second month, not only will you be exposing the baby to a heightened risk of pertussis, but also increase their chances of uncomfortable side effects, including vomiting, large-scale swelling, and redness, days of fussiness, sleeplessness, soreness, and fever.

The reason there has been so much debate in recent years about the TDAP vaccine is the global anti-vaccination movement that has recently gained traction. This is a dangerous movement that is not supported by the vast majority of scientists who are qualified to make judgments about vaccines. The recent resurgence of whooping cough in various nations around the world is due to this irresponsible new philosophy, or a poorly-based belief in autism being caused by vaccinations. [7]

Whooping cough and many other illnesses that young children are vaccinated against are often life-threatening, so the best course of action for the health of you and your baby is to simply get a TDAP vaccine during your third trimester.

Rate this article
Average rating 3.3 out of 5.0 based on 78 user(s).
Read This Next:
Popular Articles