15 Types Of Mushrooms & How To Use Them

Most of us are aware of white button mushrooms, which are widely used as a pizza topping or enjoyed as a breakfast side. But did you know that there are more 14,000 species of mushrooms worldwide? While most of these are not edible, several types of mushrooms can be used in cooking and enjoyed for their prized umami flavor. So if you are willing to venture into the vast, wild world of mushrooms, we have drawn up a list of a little more than a handful that is gaining in popularity.

So without further ado, let’s look at the most popular types of mushrooms and how to use them in cooking.

These are the most widely used variety of mushrooms (Agaricus bisporus) and account for almost 90 percent of mushrooms sold worldwide. They have a bland flavor, which deepens when sautéed in olive oil or butter. The caps should be firm, smooth-skinned, and white; the bruised ones may not be usable. [1]

Best used in stir-fry, soups, pasta, and sandwiches or as a topping for pizzas.

Best used in stews, risotto, and soups as they have a firmer texture as compared to button mushrooms. 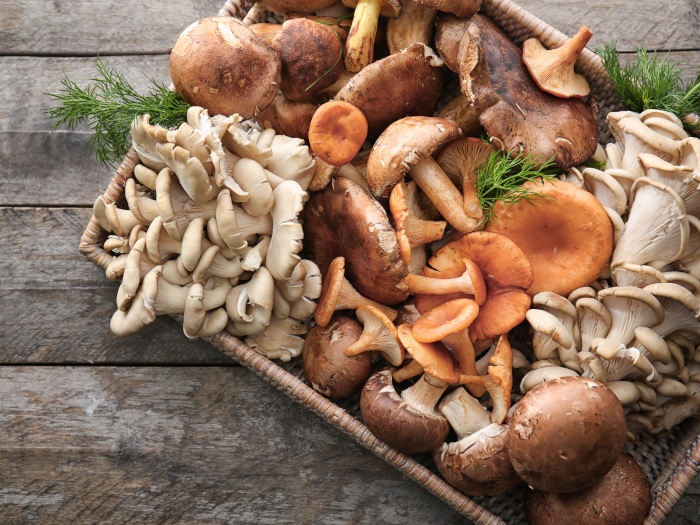 They are the most mature variety of button mushrooms and have a big cap that is completely open, exposing the gills underneath. While the entire mushroom is edible, many people prefer scraping the gill while cooking. It has a meaty flavor and is quite firm, lending itself to being grilled or stuffed. [2]

Best used in grilling, for a stuffed mushroom recipe, or a replacement for a meat burger and sometimes, even a burger bun.

They have a lovely honeycomb cap and are prized by gourmet cooks because they add a woodsy, meaty flavor to the dishes.

Best paired with meat and chicken, part of a pasta filling, or used in soups.

Oyster mushrooms are usually found growing on the side of trees. Because of their delicate taste and thin texture, these mushrooms are best used in quick stir-fries and have been increasingly gaining in popularity among chefs.

Best when stir-fried or sautéed.

These delicate mushrooms are found in the wild. They have a lovely golden hue and a delicate, apricot-like fragrance. They taste delicious when cooked with butter, cream, and or in white sauces.

Best used in French cuisine, cooked with eggs, used as a topping for bruschetta, or in pasta.

Other names: black chantarelle, the horn of plenty, and trumpet of the dead

These charcoal black mushrooms are shaped like a trumpet with gently curved ends. They have a deep smoky flavor, reminiscent of truffles.

Best when paired with fish or eggs; it is also dried and powdered and used as a flavoring in risotto and pasta.

Shiitake mushrooms are native to East Asia. They are commonly sold in dried form for medicinal purposes. For more, you can read 12 Proven Benefits Of Shiitake Mushrooms. They have a strong, earthy flavor and can be enjoyed in Asian dishes. [3]

Best used in Asian dishes or steeped to make a medicinal tea. The stems may be too fibrous to eat and can be used to add flavor to stocks and stews.

Maitake mushrooms have a wild, feathery look that is usually preserved while cooking to add a touch of drama to the final dish. You can break them into florets (think broccoli florets) while cooking. They have a lovely woodsy, almost spicy flavor and work well when paired with strong flavors and textures like soba noodles, walnuts, or wild rice.

Best used in stir-fries, pizza topping, or as a part of stuffing for pasta and omelets. They can also be grilled.

Reishi mushrooms are known for their medicinal properties and have been used for centuries in traditional Chinese medicine. They have a distinct fan-like appearance. [4]

Best when steeped to make medicinal tea or used to make soups.

Enoki mushrooms are long and delicate, white mushrooms that are usually sold in clusters. They have a crunch to them and are eaten raw or cooked. However, it is best when cooked and cleaned thoroughly as it has been associated with listeria infection. [5]

These mushrooms are so named as they grow on rice straws in Southeast Asia. They are available worldwide in dried or canned form. They are commonly used in classic Asian soups and have a delightful meaty, chewy texture. [6]

Best used in soups and pairs well with bean curd, snow peas, and even bitter vegetables.

Usually found growing on decayed beech trees in clusters, these brown or white mushrooms are firm-textured and delicious. When uncooked, they have a bitter flavor that disappears completely after cooking, transforming into a nutty taste. 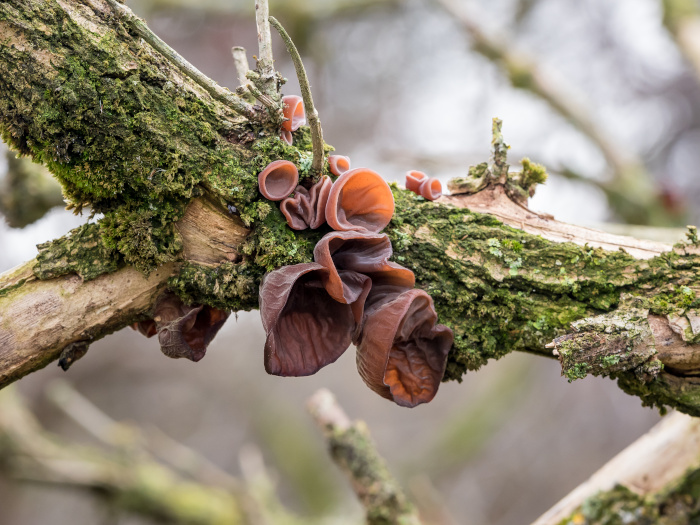 These wild mushrooms maybe a little eerie to look at but they are used widely in Asian cuisine as they pick up the flavors of whatever they are cooked with.

Best used in Asian dishes; they add a chewy-crunchy texture to soups

This fungus grows on the withered roots of bamboo shoots and is considered a gourmet ingredient in Chinese cuisine. It is crunchy and tender and looks like mini loofah sponges.

Best used in Asian soups and stews. It is also used as a roll and stuffed with condiments and vegetables.

Types of Mushrooms Based On Uses

Just to further understand the broad types of mushrooms, they can also be divided based on how we use them.