Having a urinary tract infection or UTI during pregnancy can be hugely annoying, potentially dangerous for both mother and baby, and maybe an indication of an underlying health issue. While urinary tract infections are common in women, they are particularly obvious and irritating during the stress of a pregnancy. Understanding what these infections are and knowing potential remedies, as well as preventative strategies, can be hugely helpful.

What is a Urinary Tract Infection (UTI)?

A urinary tract infection is an infection that affects the kidney, bladder, and urethra of both men and women, although they are far more common in women. In fact, more than 50% of women experience a urinary tract infection (UTI) at some point in their lives. Experts believe this is because they have a shorter urethra than men, which can increase the chances of an infection taking hold. When an infectious bacteria, typically E. coli, makes it way into the urethra, it can then continue climbing into the bladder and eventually the kidneys, if left untreated. [1] 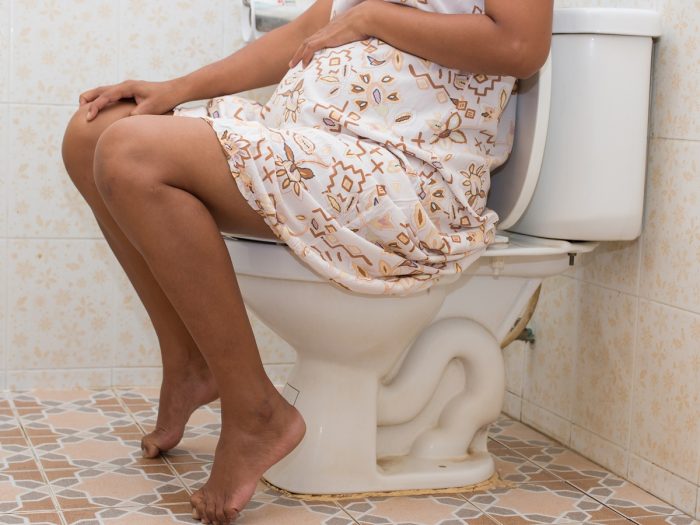 It is common to experience diarrhea during pregnancy, according to the American Pregnancy Association. Photo Credit: Shutterstock

Why are UTI’s More Common During Pregnancy?

Urinary tract infections during pregnancy can be more common, and more difficult to eliminate, because of all the changes the body is already undergoing. As a pregnant woman, your uterus expands to accommodate the growing fetus, but that expanding uterus can often apply pressure to the bladder, which sits immediately below it.

When it comes to urinary tract infections, one of the best ways to flush out the bacteria is through urination. However, when the uterus presses on the bladder, it can partially block urination, allowing the bacteria to flourish and the infection to spread. When you combine the typical risk of UTIs in women with this added challenge of pregnancy, it comes as no surprise that as many as 10% of all pregnant women will develop this infection during their term. [2]

Causes of UTI During Pregnancy

The causes of a UTI during pregnancy are mostly similar for all. Most often, due to the closeness of the anus to the opening of the urethra in women, hygienic procedures like wiping after going to the bathroom can allow bacteria to enter the urethra. This is one of the causes of this infection in women, although urinary tract infections are much more commonly passed through sexual intercourse. During foreplay and the physical actions of sex, it is very easy to spread bacteria between partners and places on the body. Sex is how almost all men contract urinary tract infections. [3]

As mentioned above, the risk of UTI during pregnancy is greater because of the pressure on the bladder, but also because of changes in progesterone levels in the body. This can cause muscles in the urinary system to relax, not only allowing some urine to always remain in the bladder but also allow bacteria to more easily access the kidneys and bladder.

Effects of UTI During Pregnancy

The impact of having a urinary tract infection while pregnant can affect both mother and child in serious ways, including the chance of premature delivery, life-threatening infection complications, and a weakened immune system. [4]

With your body changing so rapidly and handling so much stress of growing another life, it can be hard to detect a urinary tract infection. However, if left untreated, this infection can stimulate premature labor, which can cause birth defects, brain damage or even stillbirth. Furthermore, once the baby is delivered, the urinary tract infection could take advantage of the extreme strain of childbirth to aggressively attack the kidneys, which could do permanent damage.

Therefore, it is important to pay attention to symptoms and treat these conditions quickly and aggressively, along with the guidance of a doctor.

Symptoms of UTI During Pregnancy

The standard symptoms of a urinary tract infection include some of the following. If you present any of below symptoms for longer than a day, it is wise to speak with your pregnancy doctor.

Formal treatment recommendations from a doctor during the first and second trimesters will also be slightly different than your medication in the third trimester. Sulphonamides are often recommended in the first six months, but they should be avoided in the months leading up to birth, as they could increase the risk of premature delivery. [5]

Due to how common urinary tract infections are during pregnancy, there are a number of treatment options, both formal and traditional, such as pregnancy-safe antibiotics, staying hydrated, changing your hygiene habits, wearing loose clothing, using goldenseal and increasing vitamin C intake.

The most common treatment from a doctor will be mild antibiotics that can clear out the bacterial infection, without damaging too many of the other beneficial bacteria in the body or weakening your immune system. [6]

Staying hydrated is a great way to flush the body of toxins and induce urination. Since infrequent urination can lead to UTI during pregnancy, drinking at least 8 glasses of water per day can quickly eliminate these bacteria from the body. [7]

This herb has been connected to reducing urinary tract infections, thanks to its active ingredients and antioxidants. [8]

This famed booster of the immune system can help strengthen the immune defenses of the urinary tract, bladder, and kidneys, thus preventing the infections from taking hold. [9]

Prevention of UTI During Pregnancy

As mentioned earlier, one of the ways that urinary tract infections are spread is through sexual intercourse, but it can also be poor bathroom habits, particularly those involved in wiping yourself before leaving the bathroom. Wiping front to back is always safer than back to front in the spreading of unwanted bacteria. [10]

Wearing tight clothing can induce perspiration and mixing of bacteria between different parts of your body. The damp and dark environment that tight underwear can create is also an excellent breeding ground for bacteria like E. coli. [11]